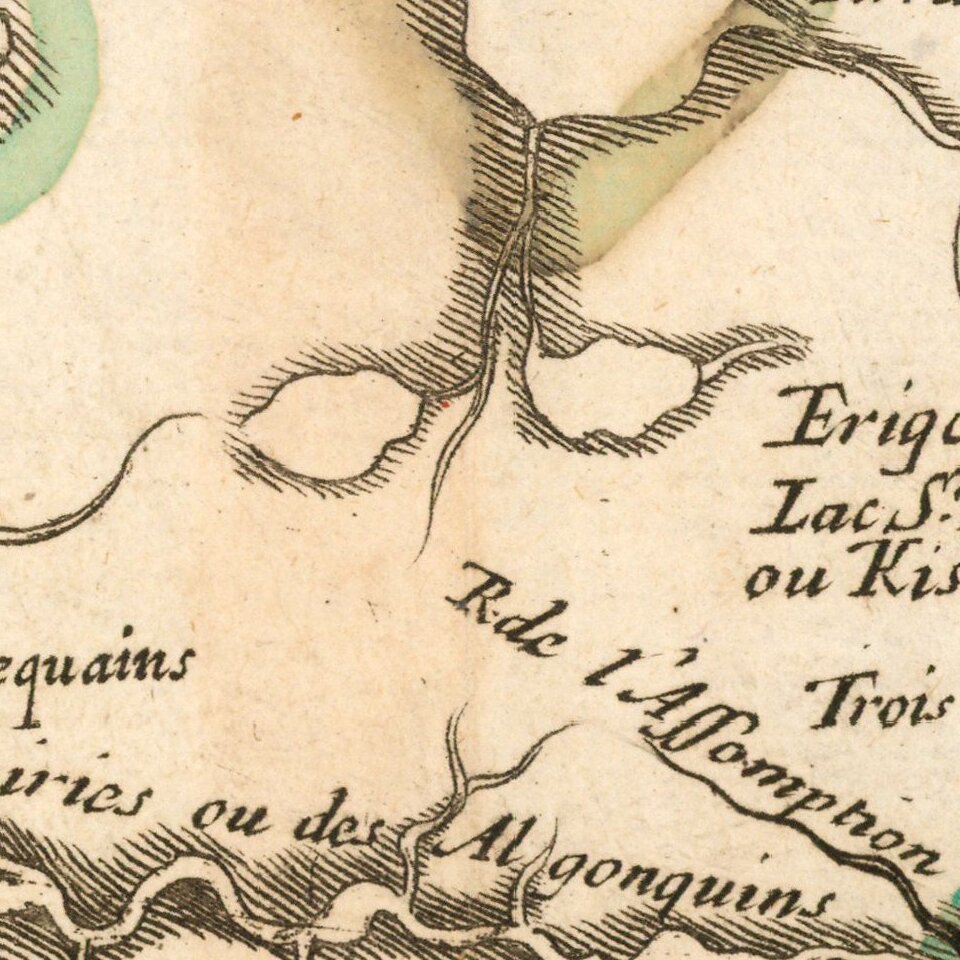 One of the Most Important Early Maps of Canada and the Great Lakes.

Du Val's Le Canada faict par le Sr. de Champlain . . . is unquestionably one of the most fascinating maps of the New World published in the 17th Century. Until 1953, it was believed that the map had been engraved by Du Val, to show the discoveries of Champlain in the first part of the 17th Century. However, in 1953, an untitled map of New France was acquired by the John Carter Brown Library, which upon close inspection was determined to be an unfinished proof state of Du Val's map, which had been engraved for Samuel de Champlain himself in 1616. The inscription, "faict par le Sr. de Champlain. 1616" which is present on the proof state and evident on later states engraved by Du Val, corresponds with Champlain's return to Paris in September 1616. Burden reports that the engraving work was done by the house of Melchior Tavernier and was likely intended to be included in Champlain's Voyage et descouvertures faites en Nouvelle France, published in Paris in 1619. As further noted by Burden, the map shows:

Champlain's discoveries in New France since the publication of his maps of 1612. In the intervening years he made probably his most epic journey of them all. . . Arriving in Quebec in the Spring of 1615, Champlain agreed to accompany his Indian allies into Huron Territory to encourage their support for a campaign against the Iroquois. They travelled some 700 miles deep into territory not recorded before, going up the Ottawa River and across to Georgian Bay on Lake Huron, Mer Douce. From there they worked their way down to Lake Ontario, Lac St. Louis, and into Iroquois territory. At a place near present day Lake Oneida they fought an inconclusive battle with the Onondaga Indians. Unfortunately, Champlain suffered a serious injury to his leg and had to be carried for a number of days. None of the Indians was willing to accompany him back to Montreal so he spent the winter with them. During this time he explored even further west along the south-eastern shore of Lake Huron. On 11 July 1616, he finally reached Quebec. . .

The original Champlain map of 1616 is more general in nature than Champlain's 1612 map, illustrating the possible water routes to the Pacific Ocean and on to Asia. In the original 1616 map, the English presence in Jamestown is noted and the recent discoveries of the Dutch. The appearance of Virginia and the Chesapeake are drawn from John Smith's map of Virginia, the first use of this information on a map other than Smith's original. The map constitutes the first appearance of Lake Huron and Ontario on a printed map and the first appearance of the route to the Ottawa River. Upon acquisition of the map, Du Val added significant place names and other features not present on the Champlain original, along with several interesting annotations, including reports of a Salt Ocean to the west of the regions depicted on the map, the place south of Lake Ontario where Champlain was attacked, and notes regarding the English search for the East Indies via Davis Straits, among others.

In a study of the map written by Lawrence Wroth in 1954, it was determined that the map acquired by the JCB was in fact a proof state, although the JCB map was printed on the same paper as the first edition of Du Val's map, indicating that Du Val acquired the plates in or before 1653 and thereafter printed a proof copy, before re-engraving the plate to include the additional information and details shown on the map from 1653 onwards.

After Champlain's return to Europe in the fall of 1616, it would appear that Champlain remained only briefly in Europe, returning to New France in early 1617. Burden speculates that upon his subsequent return to France, Champlain was involved in other matters and apparently made no attempt to complete the original versions of the map, which lay unfinished for nearly 40 years. Burden further speculates that the map may have come into Du Val's possession following his appointment as Geographer to the King in 1650, and that the original plate may have been in the possession of the King of France at the time Du Val acquired it.

The present example of the Champlain / Du Val map is state 4 of the map, according to Philip Burden's entry #309 in Mapping of North America. The states can be identified as follows:

The early states of the map are very rare on the market. Burden's discussion of the map failed to identify any surviving examples of State 4. The last example to appear on the market would seem to be the Richard Arkway Great Lakes Catalog in 1994.