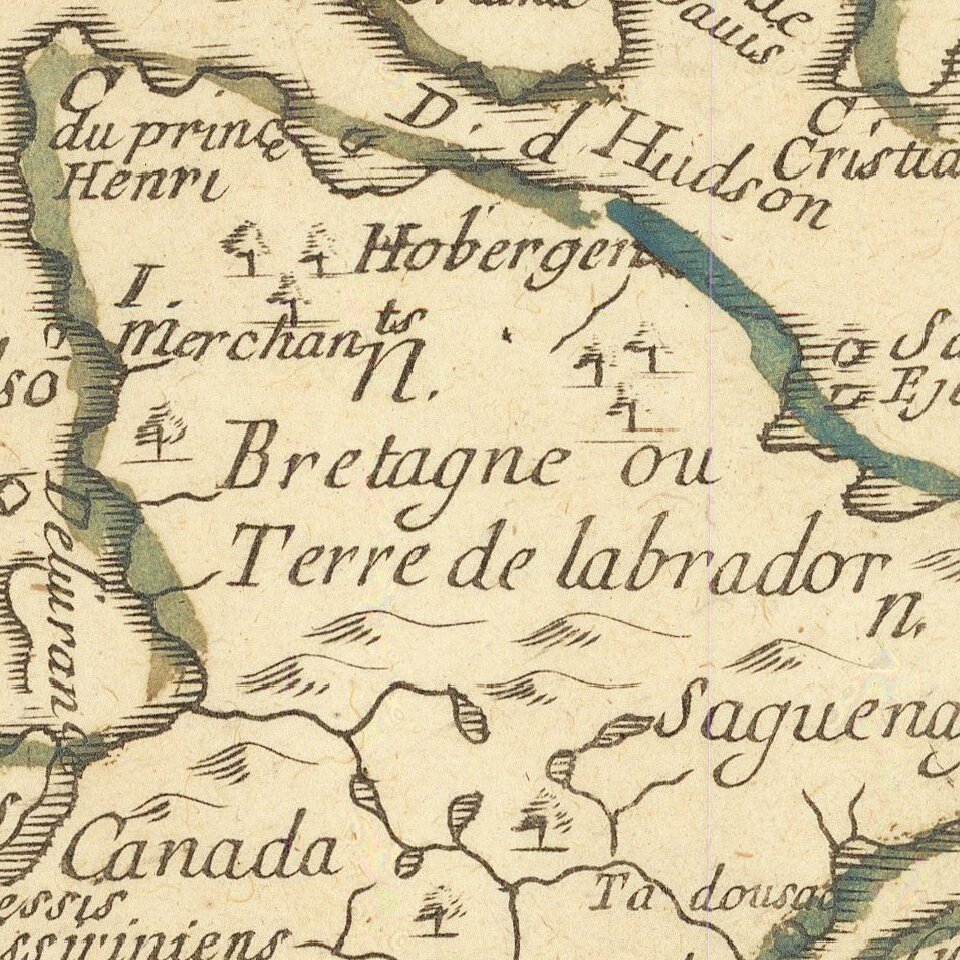 A little, very rare, gem of a map of eastern Canada and New England, stretching westwards past the Great Lakes. Many places throughout this region are named, and colonial claims are shown. The long title devotes itself to explaining the economy and demography of the region.

Duval's political leanings can be easily identified on the present map. While the colonies of New England (comprising the cities of "Pentagoet" and "Bristou"), New Holland, and New Sweden are all but limited to the coast, New France sweeps across the map. Florida, unattributed to a colonial power, stretches to include Virginia. While in effect controlled by Spain, France was unwilling to fully recognize legitimacy in Spanish claims until the late 17th century.

The map contains interesting morphological features as well as place names. A series of rivers and lakes effectively connect the Gulf of St. Lawrence to the Hudson Bay. The Hudson Bay itself is not well-formed, despite Foxe's exploratory journey being made three decades prior. The Severn River flows into a deep and narrow offshoot of the Hudson Bay entitled "Buttons B." New Denmark is visible in the westernmost reaches of the "Christian Sea" (in reality still the Hudson Bay). Lac Superieur and Lac des Puants open to the west, and many Indian tribes are named in the eastern area around the Great Lakes.

This map is originally from a single engraved sheet appearing alongside seventeen other maps in a work entitled L'Ameriqve Par P. Du Val Geographe du Roy. One map was devoted to the whole American continent, while the others focused on such areas as Newfoundland, the Caribbean, Patagonia, and Columbia. Two particularly notable maps come out of this work, the first of which is the map of California as an Island, which Burden notes "would make the part entitled Le N. Mexiqve the first map devoted so much to California." The second is the map entitled La Nvle. Svede, which "could rightly be called the first map of the Delaware River" (Burden 322). Many additional maps are intriguing for other reasons, including portraying the American holdings of such diverse colonial powers as Denmark, Sweden, and Holland.

This work was separately published, and neither Burden nor we are able to ascertain their purpose. The work appeared alongside similar charts of the four then-known continents.

This was printed as part of the second state of this work. Burden notes one example of the first state in Oxford, and two examples of the second state, one in the BNF in Paris, and one in a private American collection. An 1885 source also refers to this map being present in the BNF. An example was offered at auction in 2010, but it is uncertain if this was the same as one of the examples which Burden notes. We have been unable to locate any additional loose examples of these maps outside of the complete sheets.

Burden dates the first state of the map to circa 1656 on the assumption that Duval used many of Sanson's place names from his 1650 and 1656 maps, but not from his 1657 Audience de Guadalajara.