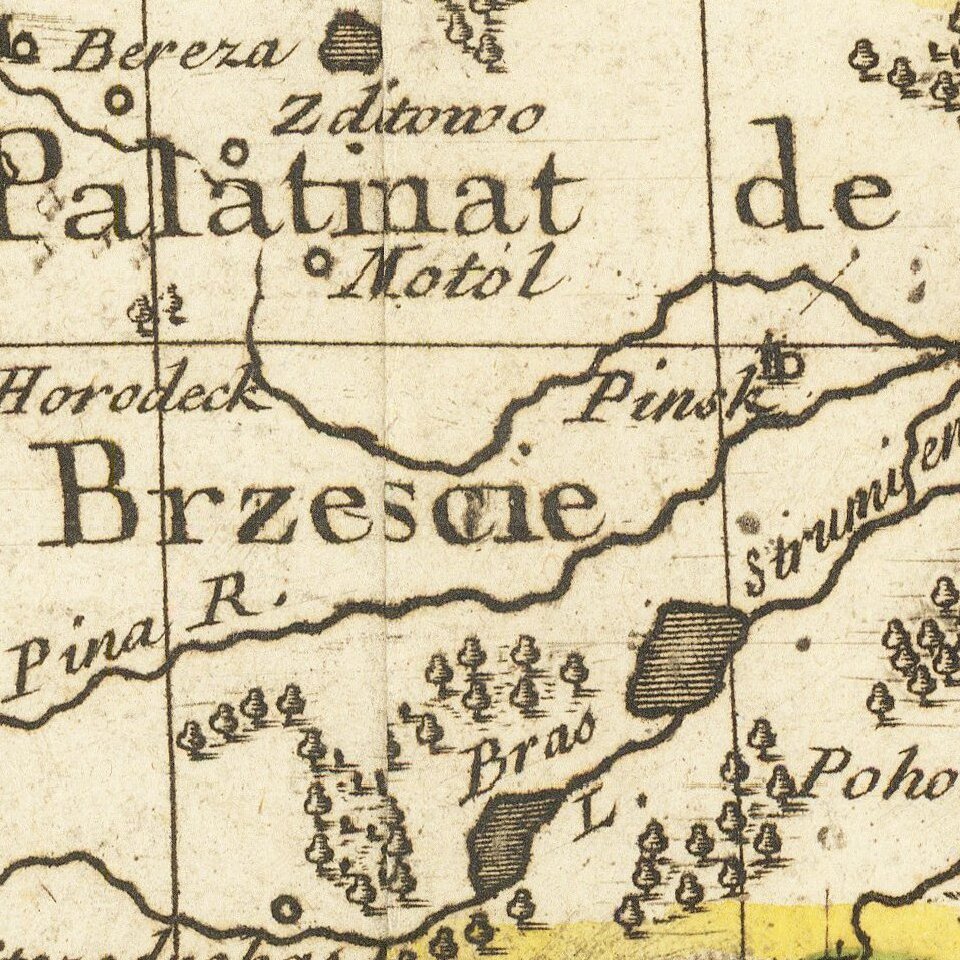 This is a scarce map encompassing Poland and parts of the grater Baltic Region, Russian, and Ukraine. The map extends from the Gulf of Riga to the Black Sea at the mouth of the Dniepr. The map includes an attractive cartouche. This is only the second time we have handled this map

The detail on the map is extensive and well-executed, reflective of the Hanovarian military training of the creator. Numerous cities, towns, rivers, lakes, mountains, and forests are all shown. Important cities of the period, such as Prague, Vienna, Dantzig, and Smolensk are colored in red. The level of detail only increases upon close inspection, with notes and depictions such as "the 4 castles" near Weissembroug in Transylvania showing now-lost elements of geography.

The reigning power of the region, the Polish-Lithuanian Commonwealth, was in steep decline. Successes in the 16th and 17th centuries had elevated it to prominence, but internal issues, such as those created by the liberum veto, and the expansionist tendencies of its neighbors would soon see its downfall. The secret pact between the Alliance of the Three Black Eagles had been signed at the time of the creation of this map, and small cessions of land had already been made to Russia. By 1772, the Partitions of Poland would be in full swing, with the third and final Partition occurring in 1795.

George-Louis Le Rouge (1712-1790), though known for his work in Paris, was originally born Georg Ludwig of Hanover, Germany. He grew up and was educated in Hanover, after which he became a surveyor and military engineer. Around 1740, however, Le Rouge moved to Paris and set up shop as an engraver and publisher on the Rue des Grands Augustins. It was at this time that he changed his name, adopting a French pseudonym that would later become quite famous.

Le Rouge spent much of his forty-year career translating various works from English to French, and his cartographic influence often came from English maps. His experience as a surveyor and engineer in Germany made him a skilled and prolific cartographer, and he produced thousands of charts, maps, atlases, and plans. His work spans from garden views and small-town plans to huge, multiple-continent maps. Le Rouge eventually accepted the position of Geographical Engineer for Louid XV, the King of France.

Later in life, Le Rouge became well-known for publishing North American maps, such as in his Atlas ameriquain septentrional of 1778. One of Le Rouge’s other more famous works is the Franklin/Folger chart of the Gulf Stream, which he worked on with Benjamin Franklin. Franklin and Le Rouge corresponded around 1780 and collaborated to create this map, a French version of Franklin’s famous chart which was originally printed in 1769.