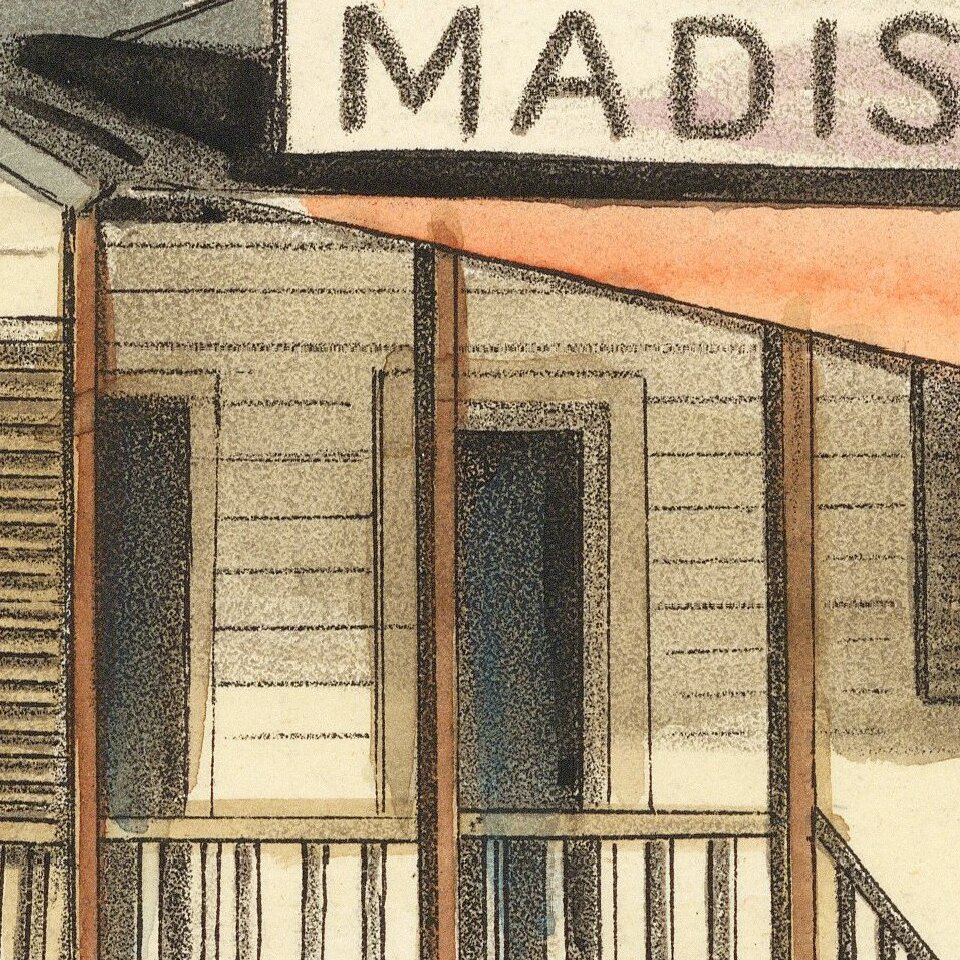 Fine early image of the Madison Cottage, shortly after it was acquired by William Thompson in 1841.

The Madison Cottage is the iconic New York landmark which gave rise to the name Madison Square, which survives with Madison Park and Madison Square Garden, all of which originally belonged to the freed slave Pieter Santomes and his sons, first acquired in 1644.

The following history of the Madison Cottage is excerpted from Daytonian in Manhattan:

Not all of the landowners north of New Amsterdam in the 17th century were Dutch-born farmers. On December 15, 1644 Willem Kieft, the Director General of the Dutch West India Company, granted a "Ground Brief" to Pieter Santomes, "a free negro." A former slave, Santomes had been granted his freedom a year earlier . . .. Kieft explained that their freedom was granted, in part, for 18 or 19 years service to the Company . . .

The land was located about three miles north of New Amsterdam, and stretched from about what today is 21st Street to 26th Street, and from Broadway to Seventh Avenue. The terms of the grant noted that Santomes was to earn his livelihood "by agriculture." It came with a caveat, however. Should the Company need his services, he would be called back; and the annual payment to the Company was 30 schepels of grain and a hog worth 20 guilders. Failure to pay would cost Santomes his freedom.

Pieter's sons, Lucas and Solomon inherited the farm on October 18, 1667. At some point they had changed their surname, taking the Anglicized form of their father's first name, Peters.

The two men were more than dirt farmers. Historian I. N. Phelps Stokes, in his 1928 The Iconography of Manhattan Island, noted "These two negros [sic], Lucas and Solomon Peters, became well known in the colony. Lucas was a physician." He added that the land "was a long way from the city and evidently a wild and rough parcel."

In 1703 the Governor's Council ordered that a "proper highway, four rods wide" be laid out, known as the Bloomingdale Road . . . through the Peters farm. It would later be renamed Broadway.

Upon Solomon Peters's death, the farm passed to his wife and children. They sold it in 1716 to merchant John Horne for 110 pounds, or $275. According to Stokes, by now the property had increased to 30 acres, extending to approximately what would be 31st Street.

Exactly when the farmhouse was constructed is unclear. A substantial frame building, it reflected distinct Dutch influence. The Ratzer Map of New York City in 1767 showed the house and gardens sitting about 200 feet west of the present Fifth Avenue. By then Jacobus Horne had owned the property for at least seven years. When he died in the summer of 1815, the farm was inherited by John Horn (the "e" in the surname had been dropped).

In 1837 Fifth Avenue was extended to 23rd Street. In 1839 the Common Council directed that the farmhouse be moved back from Fifth Avenue. It now faced the Bloomingdale Road at what is now the corner of Broadway and 23rd Street.

Two years later the old Horn farmhouse was acquired by William "Corporal" Thompson and converted to a road house named for President James Madison who died in 1836. The Fifth Avenue Bank's booklet Fifth Avenue in 1915 remembered it as "a famous resort of the riders and drivers from the City, still some miles south, and was also a post tavern in the coaching days." . . .

Stephen Jenkins, in his 1911 The Story of Broadway, noted "It was a favorite road-house on the Bloomingdale Road." A notice in The New York Herald on May 9, 1844 announced "This beautiful place of resort, opposite Madison square, corner of 23d street and Broadway, is opened for the season, and Palmer's omnibuses drive to the door It is one of the most agreeable spots for an afternoon's lounge in the suburbs of our city. Go and see."

Aside from being a stopping place for coaches, Madison Cottage offered diversions. Later The Sun wrote "Here gathered the sports of the middle of the last century, arranging cock fights and dog fights, prizefights, athletic contests and games of the day."

In 1904 the Real Estate Record & Builders' Guide remembered "In 1850...it was the principal building in the neighborhood and at the time of the cholera epidemic its sign advertising 'K.K.K. Corporal's Cholera Cure' attracted attention."

The yard of Madison Cottage was the venue of the annual Cattle Show of the American Institute. On October 18, 1850 the New-York Daily Tribune reported "Yesterday was the gala day of this exhibition....To-day the decisions of the judges will be made known...To the lovers of animals, Madison Cottage will this day present an interesting spectacle." A few days earlier the newspaper had teased its readers saying "There is a specimen of beef in the shape of an ox, at the Madison Cottage, weight only 4,500 lbs."

By now the area around Madison Cottage had greatly changed. Madison Square had formally opened in 1847 and handsome residences had begun girding the park and lining Fifth Avenue. In 1853 the ancient farmhouse was demolished, to be replaced by Franconi's Hippodrome, described by Stephen Jenkins as "a two story, brick building, where performances of a superior quality were given."

But that venture would be short lived. Jenkins went on to report "In 1858, the Hippodrome in turn gave way to a magnificent marble hotel, which was for many years the most notable in New York. This was the Fifth Avenue Hotel, which was the usual stopping place of most of the presidents after 1860 when they visited the city." . . .