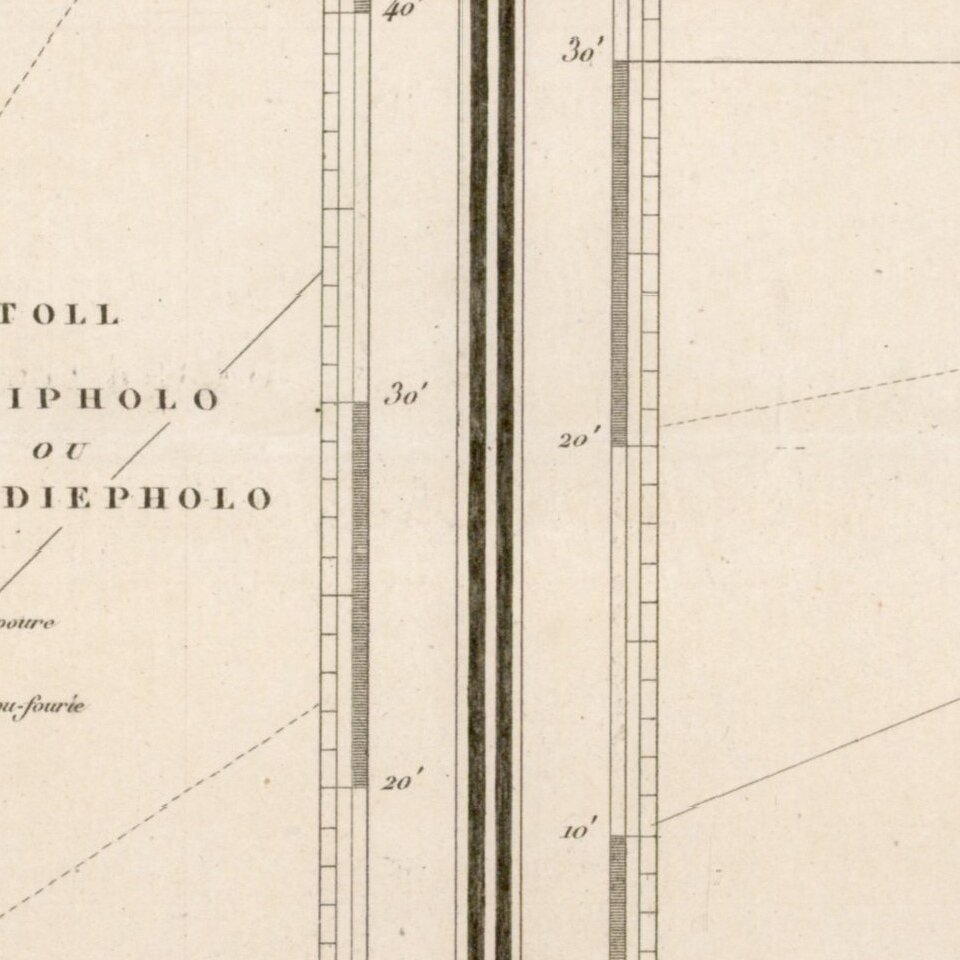 First French Edition of Moresby's Chart of the Maldives

One of the earliest obtainable maps to focus on the Maldive Islands, based upon the surveys conducted by Robert Moresby in 1835.

Morseby's surveys of the Maldives were the first modern survey of the region and became the standard chart for decades thereafter. His first published sea charts were Chart of the Maldeeve, or Maldiva Islands; Reduced from the Large Scale in Three Sheets, Surveyed by Commander R. Moresby, and Lieutenant F.J. Powell, I.N. in 1836, and based upon his Trigonometrical Survey of the Maldive Islands (in 3 sheets), both of which are exceptionally rare on the market (OCLC locates 1 example of each).

Moresby's chart was quickly follows up by the present French charting of the region.

Robert Moresby & The Charting of the Maldives

Robert Moresby (1794 – 1854) was a captain of the East India Company's Bombay Marine/Indian Navy who distinguished himself as a hydrographer, maritime surveyor and draughtsman. Moresby is best know for conducted the first modern survey the Red Sea (1829-32).

After the completion of the Red Sea Survey, Robert Moresby was sent to chart various coral island groups lying across the track of India-to-Cape trade. In 1834–36 Moresby, assisted by Lieutenants Christopher and Young, undertook the difficult cartography of the Maldive Islands, drawing the first accurate maritime charts of this complicated Indian Ocean atoll group (Admiralty Charts). These charts were printed as three separate large maps by the Hydrographic Service of the Royal Navy.

Moresby's survey of the Atolls of the Maldives was followed by the Chagos Archipelago. where he conducted "a thorough scientific survey". He planted 30 breadfruit trees in Diego Garcia Island, the largest of the group. Moresby reported that "there were cats and chickens on the island". Some of his observations were used by Darwin in his 1842 book "The Structure and Distribution of Coral Reefs."

Moresby's charts were so good that they were favored by Maldivian pilots navigating through the treacherous waters of their atolls until the 1990s, when satellite images appeared. In the Maldives a channel locally also known as Hanikandu, between Northern Maalhosmadulhu Atoll and "Fasdhūtere" Atoll, is still known as 'Moresby Channel'.

Moresby in the Maldive Islands

In 1558, the Portuguese established a small garrison with a Viador (Viyazoru), or overseer of a factory (trading post) in the Maldives, which they administered from their main colony in Goa. They tried to impose Christianity on the locals. Fifteen years later, a local leader named Muhammad Thakurufaanu Al-Azam and his two brothers organized a popular revolt and drove the Portuguese out of Maldives.

In the mid-17th century, the Dutch, who had replaced the Portuguese as the dominant power in Sri Lanka, established hegemony over Maldivian affairs without involving themselves directly in local matters, which were governed according to centuries-old Islamic customs.

The British expelled the Dutch from Ceylon in 1796 and included Maldives as a protected state. By the 1800s, the European Oriental Trade had expanded vastly, and since the Maldives straddles the trade routes from Europe and Africa to the East, surveying and charting the Maldivian seas became a most urgent international need. Therefore, when the British Admiralty survey of the Red Sea was completed in 1834, Commander Moresby was dispatched to the Maldives.

Moresby came to the Maldives in 1835 with special letters to the Radhun from the Governments of Bombay and Ceylon. The purpose of Commander Moresby's visit was to survey and chart the Maldivian seas for the British Admiralty. However, the Radhun viewed Moresby's visit with suspicion. Moresby was bearing a letter from the British government to the Radhun. The letter stated that the survey and charting the reefs, sand banks and the depths of the local seas would facilitate the movements of vessels calling at Male', and thereby increase and broaden the local overseas trade. However, when considered in a different perspective there were innumerable issues which could arise because of the British intentions. The reefs and the shallows of the Maldives was her first line of defense. The strategic importance of the topography of the Maldivian reefs, shallows, islands and the atolls of the country has been a closely guarded secret of the Maldivian militia for centuries.

Therefore, if the Maldivian territory was to be charted by the British, this first line of the Maldivian defense system would become obsolete. Mueenuhdeen Radhun's defense system would have been made vulnerable. The Radhun worked to prevent Moresby from his survey work, as it represented a threat to the Radhun's throne. Furthermore, Moresby's inspection of the bastions of Male gave further threat to the Radhun, making the Radhun suspicious of the British intentions. The Radhun not only refused to cooperate with Commander Moresby, but also created all sorts of passive obstructions and Moresby left the Maldives with his intentions unfulfilled.

Ultimately, the situation caused a significant internal political struggle between the Radhun and his rivals, but Moresby was able to complete the first modern survey of the region.