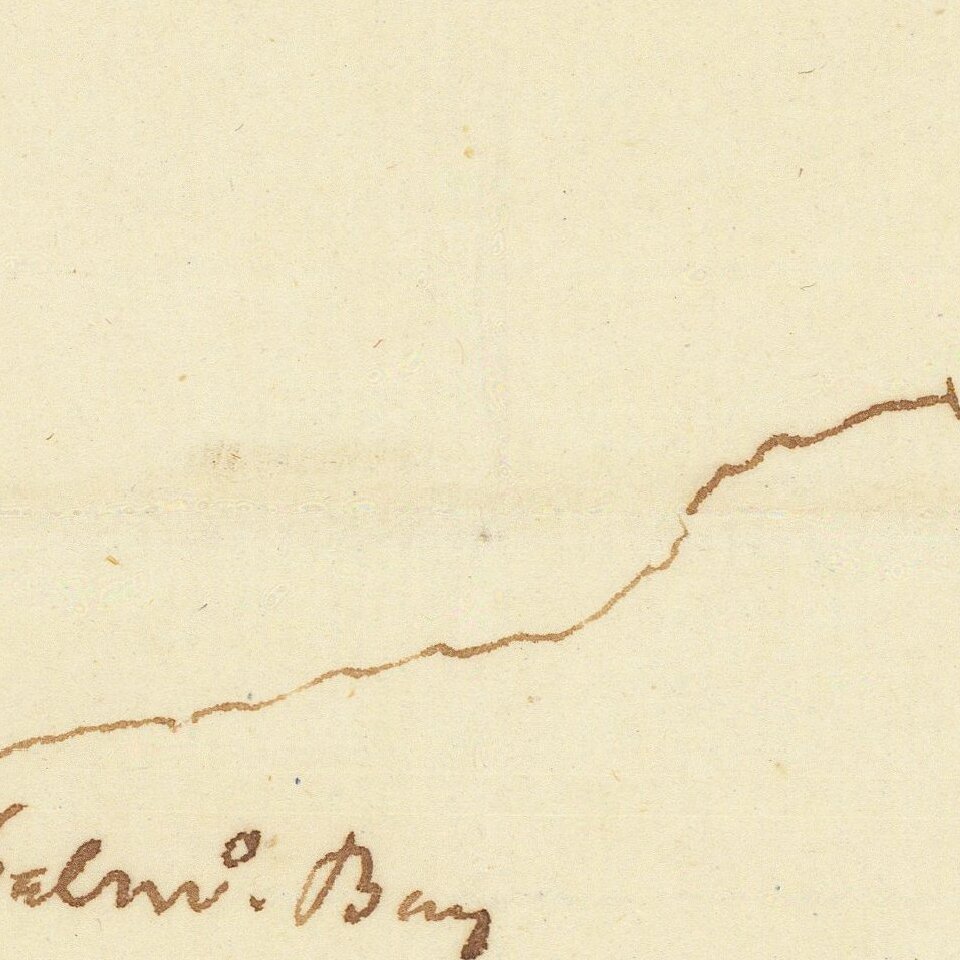 The chart tracks the coast of Massachusetts and Rhode Island, with Block Island and Nantucket in the south and Boston Harbor and Nahant Point in the north. With the exception of a few larger cities, the details shown are entirely coastal in nature.

A comparison of this map to the Thomas Jeffery's Map Of The Most Inhabited Part Of New England . . . shows that the place names and coastal features are almost certainly drawn from this period, with unusual place names such as Crab Bank (off the coast of Cape Cod), Old Rose & Crown (Shoal) and New Crown & Rose (Shoal) shown, placenames that tended to disappear by by the beginning of the 19th Century. The placement of names and shapes of islands and coastal configurations strongly suggest that the chart was drawn in the period between about 1770 and 1790, as by the late 1790s, the charting of the region by American mapmakers had advanced considerably and also no longer used these place names. The following maps illustrate this transition:

The chart is drawn on handmade paper with a watermark which would suggest that the paper was made sometime in the second half of the 18th Century (a variant of the relatively common D&C Blauw watermark).

The chart was acquired in October 2020 at Brunk Auctions, as a part of a collection of printed and hand drawn sea charts and maps from the descendants of James Sever, Captain of the USS Congress, one of the famed first six frigates of the U.S. Navy. Captain Sever was born in 1761, attended Harvard, and upon graduation received an ensign’s commission in the 7th Massachusetts Regiment in February, 1781, during the Revolutionary War. Sever later transferred to the 4th Massachusetts Regiment and remained in the Continental Army until June 1784.

Sever was from a successful Massachusetts merchant family, and that background along with his military experience was enough for him to be named the superintendent of the USS Congress during its construction in 1795. In 1798, he became one of the first six post captains of the U.S. Navy. Sever in fact served in the first foreign action of the U.S. Navy, when the Congress was involved in privateer hunting in the Caribbean and the U.S. intervention in the Haitian War of Knives. Sever had a relatively short career in the Navy and was dismissed during Jefferson’s purge of the officer corps in 1801.

18th Century hand drawn American Sea Charts are very rare on the market. The connection to a famous American Sea Captain is quite intriguing.

While a number of the printed sea charts in the collection referenced above were signed, this chart was unsigned.