1851. Map of Australia, Compiled from the Nautical Surveys, Made by Order of the Admiralty, and other Authentic Documents.

Map of Australia, Compiled from the Nautical Surveys, Made by Order of the Admiralty, and other Authentic Documents. information: 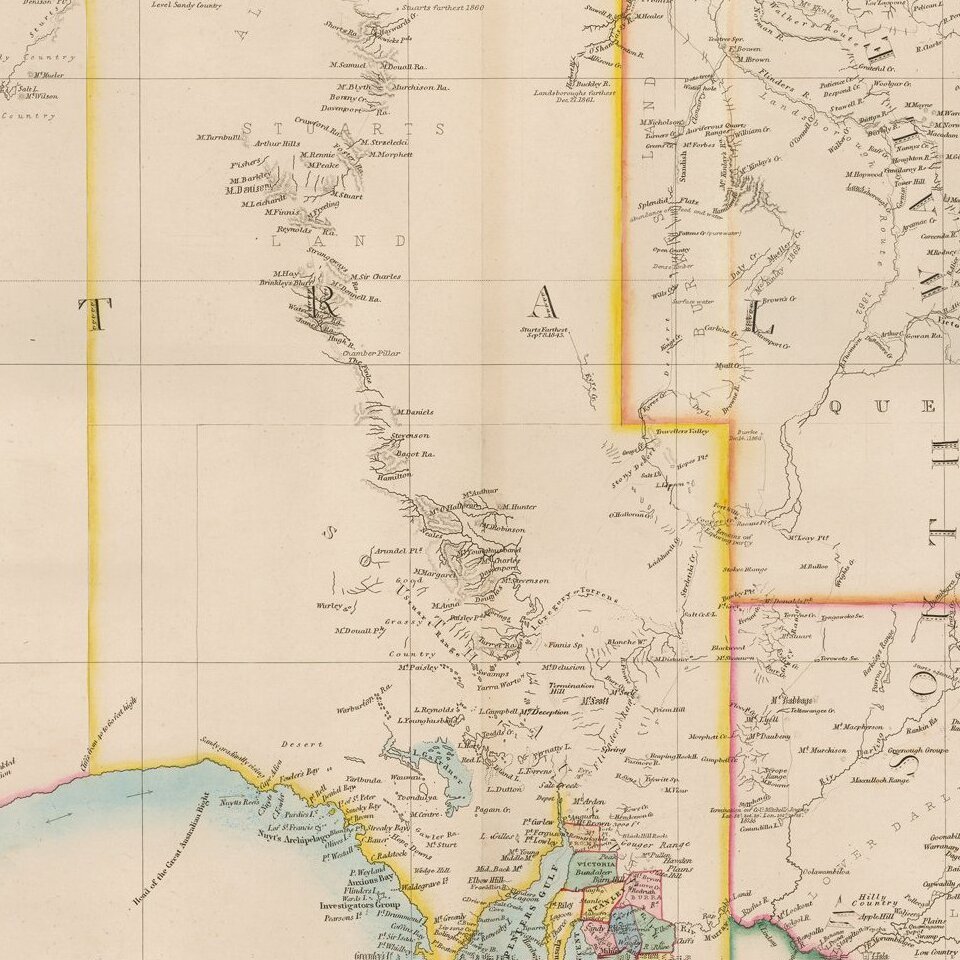 Important Map of Australia, Updated To Include The Gold Discoveries in the Newly Created Colony of Victoria.

Wyld's map captures Australia in 1851, shortly after the creation of Victoria Colony and the discovery of Gold.

The coastlines of the subcontinent are now well defined following the explorations of Matthew Flinders and others, however, a majority of the interior remained a complete enigma. Most of the settlement is centered around the eastern coastline of New South Wales (with a newly created Queensland delineated) centered around Sydney and the twenty-six counties centered around Perth in Western Australia (still referred to as 'New Holland'). Southern Australia includes defined borders, and Victoria is now named, with the name 'Australia Felix' no longer shown and an effort to locate the gold deposits market (see Explanation at the bottom center). Van Diemen's Land or Tasmania, which is detailed in a large inset, shows development in its westerns regions with nine counties having been laid out.

In the center of the map, Stuarts Land and Alexanders Land are shown, reflecting the early explorations in the interior regions.

Importantly the map depicts the recent discoveries of several explorers, especially with respect to the conspicuous detail in the interior of what in now Victoria and the far southern part of New South Wales. On various treks from 1824 to 1828, Hamilton Hume discovered the overland route from Sydney to Port Philipp (the future site of Melbourne), as well as the Darling River, the Murray River's longest tributary. Knowledge of the Murray Basin and surrounding regions was expanded upon by the expeditions of Charles Sturt from 1828 to 1830 and Sir Thomas Mitchell from 1831 to 1836. Mitchell had previously been responsible for the mapping of the settled regions of New South Wales as shown on this map, an achievement for which he received his knighthood.

The present map is one of Wyld's in the sequence of continually updated maps of Australia, the first state of which appeared in 1833. The series is of great historical importance for it played a definitive role in recording the rapid progress of exploration and development during Australia's formative years. James Wyld (1812-87) was then one of the world's leading mapmakers, holding the title of official Geographer to Queen Victoria.

Not in Tooley; National Library of Australia, Bib ID 209675.