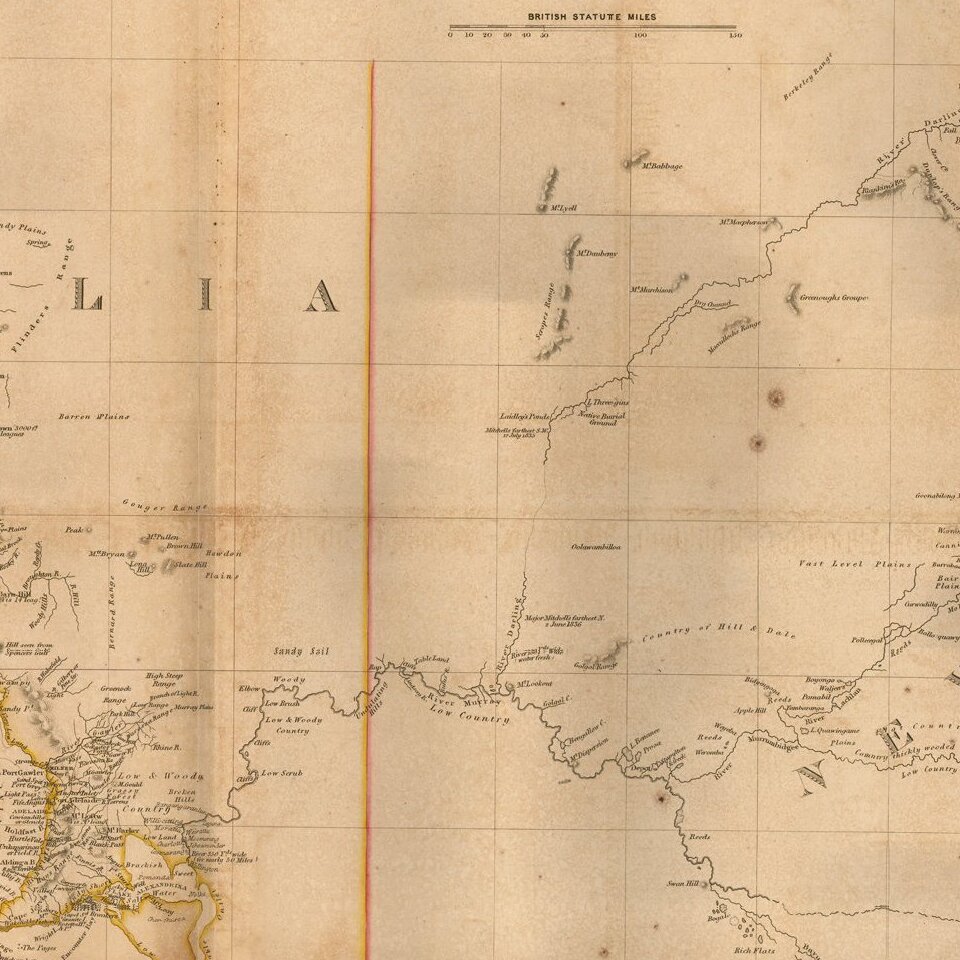 A fascinating early map of the settled parts of Australia, featuring discoveries from recent expeditions into the interior.

Wyld's map depicts all of the settled areas of Australia as they appeared around 1840. The main map embraces the area of the modern states of New South Wales, Victoria (Australia Felix) and South Australia, while detailed insets feature Western Australia and Tasmania (Van Diemen's Land).

Most of the settlement is concentrated in two regions, the counties in New South Wales (which then included all of Queensland) centered on Sydney and the counties centered on Perth in Western Australia. Southern Australia is the only state with a defined border, however, Victoria remains unorganized territory called 'Australia Felix', shown more than a decade before the gold rush. Van Diemen's Land (later Tasmania), which is detailed in a large inset, shows development in its westerns regions with nine counties having been laid out.

Additionally, the map includes insets of Sydney Harbor and the town of Adelaide (founded only in December 1836), with a smaller inset of the Port of Victoria. An early state of the map sold by G. Cruchley (81 Fleet Street, London), in the possession of the National Library of Australia and the British Library, was likely released in 1839; its does not contain the Victoria inset, while all surviving copies sold by Wyld have the inset and seem to be from 1740 or later. Most copies also have each county shaded in a different color; fewer have the simple outlining shown on this version and those that do are earlier states.

By the 1740s, the coastlines of the subcontinent were well defined following the explorations of Matthew Flinders and others. However, a majority of the interior remained a complete enigma. Importantly the map depicts the recent discoveries of several explorers, especially with respect to the conspicuous detail in the interior of what in now Victoria and the far southern part of New South Wales.

On various treks from 1824 to 1828, Hamilton Hume discovered the overland route from Sydney to Port Philipp (the future site of Melbourne), as well as the Darling River, the Murray River's longest tributary. Knowledge of the Murray Basin and surrounding regions was expanded upon by the expeditions of Charles Sturt, from 1828 to 1830 and Thomas Mitchell from 1831 to 1836.

On the map, Mitchell's achievement is marked with a note in the discontinuation of the River Darling, "Mitchell's farthest S. W. 17 July 1835" and "Major Mitchell's farthest N. 2 June 1836." Thomas Livingstone Mitchell learned to survey when serving in the Army in Portugal. In 1827 he was appointed to the position of Surveyor General of New South Wales. In 1834 he was tasked with creating a map of the Nineteen Counties, which he performed admirably and in return received a knighthood. He died in 1855. Fittingly, the present map is dedicated to Mitchell, to whom Wyld was indebted for much of the detail of the eastern portion of his own map.

James Wyld (1812-87) was then one of the world's leading mapmakers, eventually holding the title of Geographer to the Queen and H.R.H. Prince Albert. His father, James Wyld the elder (1790-1836), succeeded William Faden, taking on the former's successful and respectful business. He held the title of Geographer Royal, a recognition of his status and skill, not a guarantee of royal patronage, until 1836, when he died of exhaustion. James the younger joined the business in 1830, after a brief stint in the Army. He was an MP for Bodmin from 1847-52, 1857-68.

The present map is one of Wyld's sequences of continually updated maps of Australia and her regions. They are of great historical importance for they played a definitive role in recording the rapid progress of exploration and development during Australia's formative years. The earliest approximated date for Wyld's map is 1839, based on an advertisement for a similar map in a history of South Australia published in that year and the dating of the surviving Cruchley version. Updated reprints continued to be issued well into the 1850s.

Unfortunately, Wyld seldom dated his maps. However, some of the states of the map are datable using the location of the Wylds' shops over the years and the various titles they assumed based on who ruled Britain at any given time. Victoria ascended to the throne in 1837, which is when James the younger began to use the title, Geographer to the Queen. He used Charing Cross East (only four doors from Trafalgar Square), as an address from 1837-52, although it lingered on in some re-issued maps. From 1846 he also used 2 Royal Exchange and from 1851-61 he included Model of the Earth Leicester Square, to advertise his colossal globes that were an attraction in the busy square.

This map would seem to be from between 1840 and 1851, as it does contain the Victoria inset yet does not list the Model of the Earth as an address. We are able to narrow it more as being pre-1847-8, as that is when Wyld added Port Albert in Victoria, which is not labeled on this version. Also, the Darling River is not completed in this state, while it is connected between the points of Mitchell's expeditions in the states printed from the early 1850s.