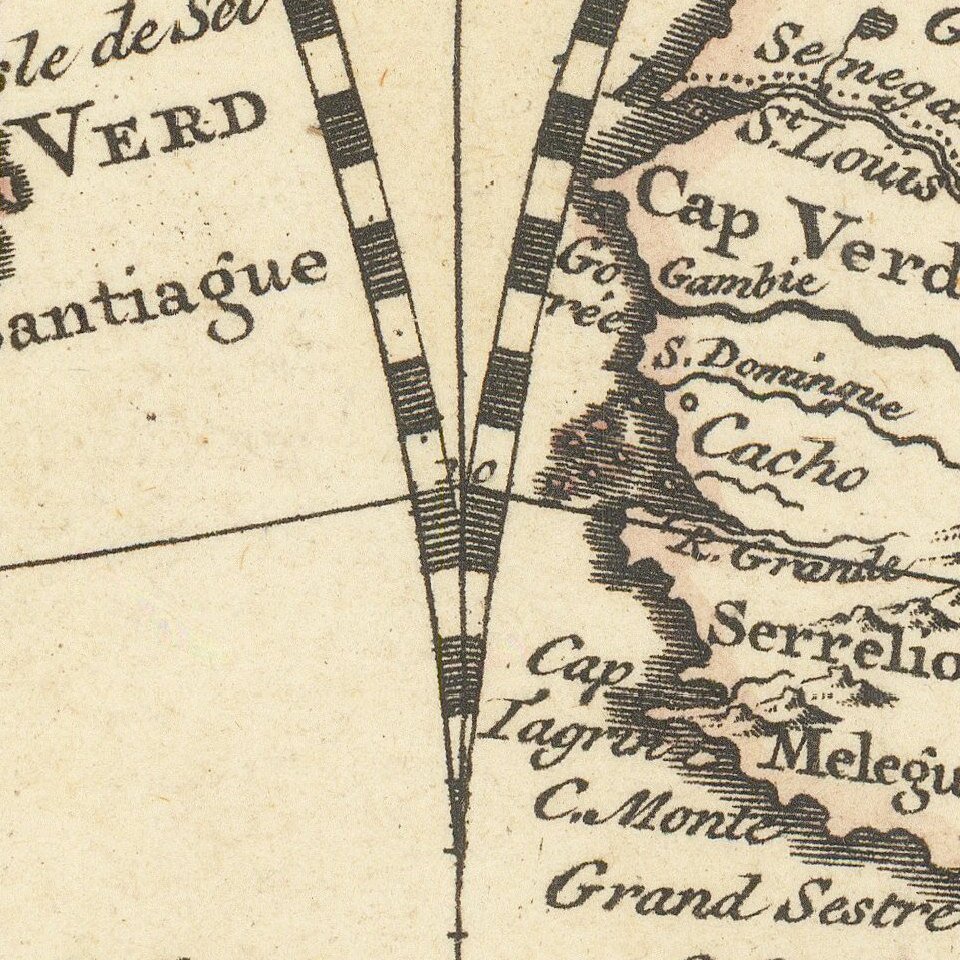 This is an example of a first edition of Covens' and Mortiers' decorative double hemisphere map of the world by De L'Isle. It shows the extent of oceanic exploration by the European overseas empires to the mid-eighteenth century.

The ornate double hemisphere map includes four polar projections around the edge, allowing one to view the earth from varying angles. In the upper left corner is the southern hemisphere, while the northern hemisphere is to the upper right. The lower corners repeat this symmetry, but the projections there are oblique in perspective. They center on Paris and its antipodes. In all four cases, the relatively unknown Polar Regions are highlighted.

Although there is little decoration within the graticule of the hemispheres, the map is quite ornate. The title is enclosed in a cartouche. Arrayed around the sides of the cartouche's frame are four women representing the continents: Europe, America, Africa, and Asia. A ribbon unfurls across the top declaring the dedication: Nova Orbis Tabula ad Usum Serenissimi Burgundiae Ducis, a new world map for the use of the Duke of Burgundy.

Along the bottom edge of the map are the publishers' details. Covens' and Mortier's privilege is proclaimed from inside an aquatic-themed cartouche. A sea monster's mouth makes up the top of the frame, surrounded by marine vegetation. Two mermaids, a female and a male, are at either side. The man, to the left, blows a conch, while the women, to the right, strokes a large fish. The sea stretches in the background, peppered with sailing vessels of all sizes.

The western hemisphere is dominated by the vast Pacific. The northwest coast of North America is unfinished, and California is a particularly curious peninsular shape. Farther west, the east coast of northern Asia stretches across the North Pacific. This portion of the Asian coast is labeled as discovered by Juan de Gama on a voyage from China to New Spain.

Juan, the grandson of Vasco de Gama, was a Portuguese navigator who was accused of illegal trading with the Spanish in the East Indies. Gama fled and sailed from Macau to Japan in the later sixteenth century. He then struck out east, across the Pacific, and supposedly saw lands in the North Pacific. These lands were initially shown as small islands on Portuguese charts, but ballooned into a continent-sized landmass in later representations. Several voyagers sought out de Gama's lands, including Matthijs Hendrickszoon Quast in 1639 and Maarten Gerritszoon Vries in 1643. After this map's publication, Vitus Bering, a Danish explorer in Russian employ, and James Cook would both check the area and find nothing, finally putting to rest the myth of Gamaland.

This is but one of the stories recounted in the names and tracks of voyages on this map. Another highlight in the western hemisphere are the glaciers of Edmund Halley. Halley convinced the British Admiralty to give him a ship, the Paramore, to use as a mobile laboratory for studying magnetic variation. On his second voyage, Halley took the Paramore into the Southern Atlantic. While there, he nearly lost his ship to the soaring icebergs he found there. Halley wrote to Josiah Burchett, Secretary of the Admiralty, on March 30, 1700:

In Lattd: 52 ½ ° and 35 ° west Longitude from London, we fell in with great Islands of Ice, of soe Incredible a hight and Magnitude, that I scarce dare write my thoughts of it, at first we took it for land with chaulky cliffs, and the topp all covered with snow, but we soon found our mistake by standing in with it, and that it was nothing but Ice, though it could not be less then 200 foot high, and one Island at least 5 mile in front, we could not get ground in 140 fadtham. Yet I conceive it was aground, Ice being very little lighter then water and not above an Eight part above the Surface when it swims…

Halley, awed by the size of the icebergs, hypothesized that they must be land, not floating, as ice typically concealed more beneath the surface than above and Halley could not imagine a floating entity so large.

Other notable voyages that were important to the understanding of geography include Magellan's circumnavigation and Francis Drake's. There is also reference to the voyages of Mendaña and Ferdinand de Quiros to the Solomon islands in the late sixteenth and early seventeenth centuries. The voyage of Shouten and Le Maire is marked, a circumnavigation in 1615-6 that found an alternative route to the Pacific than the Straits of the Magellan. The Dutchmen went instead round Cape Horn. Lesser known voyages are also noted, including the voyage of Dutchman Lindeman in 1670 that found an island in the Southern Atlantic, here named Isle de Saxembourg. Another voyage, of the St. Louis in 1708, crosses the South Atlantic. It was a French merchant enterprise and was the first ship to cross from Cape Horn to the Cape of Good Hope.

The eastern hemisphere also shows notable discoveries. The outlines of I de Dyna and Marsevoen are drawn lightly, as they were unconfirmed islands seen in Dutch charts, a source that usually was kept secret by the Dutch East India Company (VOC). In the far north, a latitude is also marked as the highest point the Dutch achieved in 1670. De L'Isle was also well-schooled in the VOC's encounters with New Holland, memorialized with place names including Terre de Wit (1628) and Terre d'Endracht (1616).

The journey of Pelsaert in the Batavia in 1629 is also marked. Batavia departed Texel in the Netherlands in October 1628 and had a troubled journey round the Cape of Good Hope. A VOC official, Jeronimus Cornelisz, and the ship's skipper, Ariaen Jacobsz, hatched a munity against Pelsaert, the merchant in command of the ship. The mutiny failed, but the Batavia ran aground in Western Australia in June 1629. Pelsaert sailed for Batavia, on the island of Java, in the ship's boat to get help. Four months later Pelsaert returned to a grisly scene. Cornelisz had seized control and set up a tyrannical government. He and his supporters killed over 100 people. Pelsaert tried the mutineers and executed some of them on Seal Island. He returned to Batavia, where he was blamed for a lack of authority and stripped of his assets.

A less grim reminder of a historical event is the route of the Chevalier de Chaumont. The Chevalier led the first French embassy to Siam, arriving in 1685. They returned the two Siamese diplomats who had visited the court of Louis XIV in 1684. Chaumont eventually gained fame as a travel writer, but as a diplomat he failed to convert the Siamese King to Catholicism or to secure lucrative trade deals.

Guillaume De L'Isle (1675-1726) is probably the greatest figure in French cartography. Having learned geography from his father Claude, by the age of eight or nine he could draw maps to demonstrate ancient history. He studied mathematics and astronomy under Cassini, from whom he received a superb grounding in scientific cartography-the hallmark of his work. His first atlas was published in ca. 1700. In 1702 he was elected a member of the Academie Royale des Sciences and in 1718 he became Premier Geographe du Roi.

De L'Isle also played a prominent part in the recalculation of latitude and longitude, based on the most recent celestial observations. His major contribution was in collating and incorporating this latitudinal and longitudinal information in his maps, setting a new standard of accuracy, quickly followed by many of his contemporaries. Guillaume De L'Isle's work was widely copied by other mapmakers of the period, including Chatelain, Covens & Mortier, and Albrizzi.

Covens & Mortier was an Amsterdam publishing company that was in business from 1721 to 1866. Pierre Mortier (1661-1711) was an engraver and mapmaker born in Leiden. Mortier was in Paris from 1681 to 1685 and secured the right to publish French maps in Amsterdam. His son, Cornelis (1699-1783), joined forces with Johannes Covens I (1697-1774). The partnership accumulated a huge reserve of maps to sell from Johannes Janssonius, Nicolas Sanson, and, of course, Guillaume De L'Isle, which they reissued frequently.