1858. Mitchell's New National Map, Exhibiting The United States with the North American British Provinces, Sandwich Islands, Mexico and Central America, Together with Cuba and the other West India Islands . . . 1858

Mitchell's New National Map, Exhibiting The United States with the North American British Provinces, Sandwich Islands, Mexico and Central America, Together with Cuba and the other West India Islands . . . 1858 information: 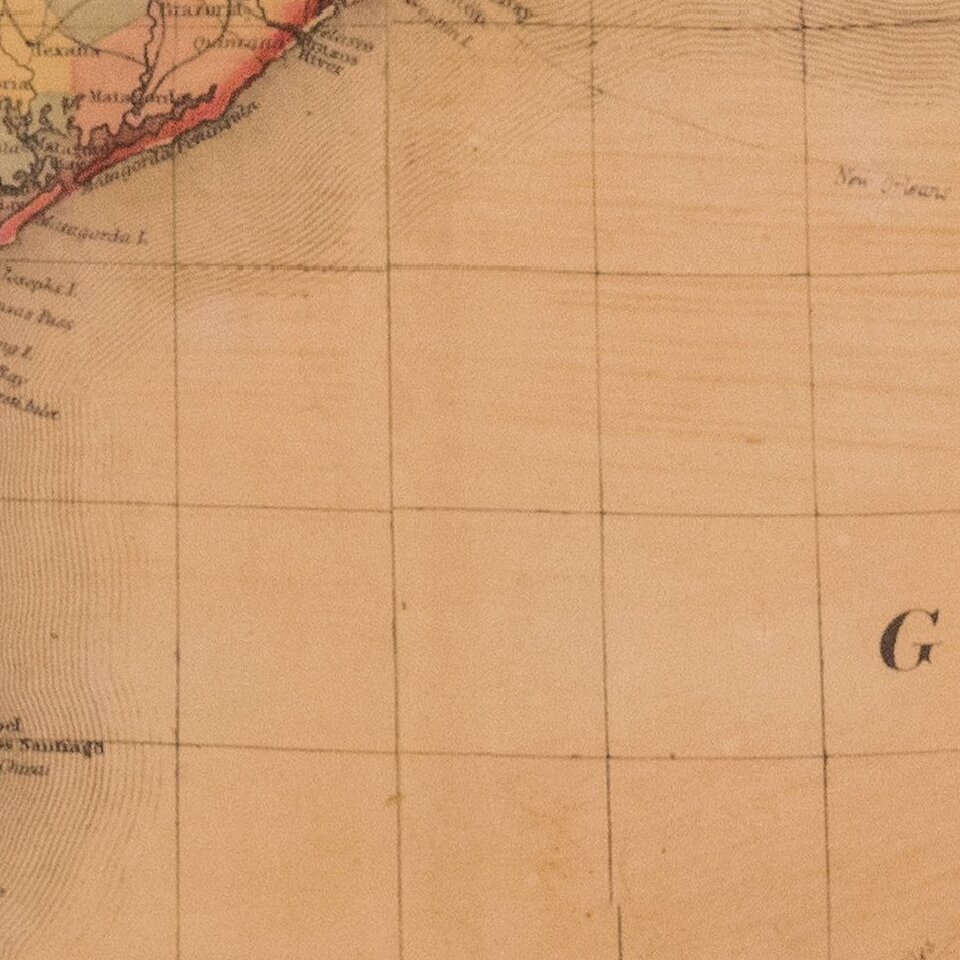 Fine Example of Mitchell's National Map of the United States

Fine wall map of the United States, illustrating the transitional western Territorial and State borders, published by S A Mitchell in 1858.

First published in 1856, Mitchell's remarkable wall map is perhaps the single most recognizable wall map of the United States of the period.

Embellished with inset maps of the Sandwich Islands and 2 maps of the World, and including decorative vignettes and extensive tables, the map was one of the most commercially successful maps of its time, regularly amended to update the changing territorial and state borders of the West.

The map is noteworthy for a number of reasons, including:

In February 1858, the New Mexico territorial legislature adopted a resolution in favor of the creation of the Arizona territory, but with a north–south border along the 109th meridian. In April 1860, impatient for Congress to act, a convention of 31 delegates met in Tucson and adopted a constitution for a provisional territorial government of the area south of 34 degrees north. The delegates elected Dr. Lewis S. Owings as provisional governor.

At the outbreak of the Civil War, sentiment in the territory was in favor of the Confederacy. Territorial secession conventions were called at Mesilla and Tucson in March 1861 that adopted an ordinance of secession, established a provisional Arizona Territory with Owings as its governor, and petitioned the Confederate Congress for admission.

The Confederacy regarded the territory as a valuable route for possible access to the Pacific Ocean, with the specific intention of capturing California. In July 1861, a small Confederate force of Texans under the command of Lieutenant Colonel John R. Baylor assaulted Fort Fillmore at Mesilla in the eastern part of the territory. After the fort was abandoned by the Union garrison, Baylor's force cut off the fleeing Union troops and forced them to surrender. On August 1, Baylor issued a "Proclamation to the People of the Territory of Arizona", taking possession of the territory for the Confederacy, with Mesilla as the capital and himself as the governor. Baylor's subsequent dismantling of the existing Union forts in the territory left the white settlers at the mercy of the Apache, who quickly gained control of the area and forced many of the white settlers to seek refuge in Tucson.

The following month, in March 1862, the U.S. House of Representatives, now devoid of the southern delegates and controlled by Republicans, passed a bill to create the United States Arizona Territory using the north–south border of the 107th meridian. The use of a north–south border rather than an east–west one had the effect of denying a de facto ratification of the Confederate Arizona Territory. The house bill stipulated that Tucson was to be the capital. The final bill passed the Senate in February 1863 without the Tucson-as-capital stipulation, and was signed into law by President Abraham Lincoln on February 24, the date of the official organization of the US Arizona Territory.

While Mitchell's Wall Map is not particularly rare, the map rarely appears in such fine original condition.

For over fifty years, Samuel Augustus Mitchell, his son, and his successors some of the most prominent publishers of maps and atlases in the United States. Samuel Augustus Mitchell Sr. was born in Bristol, Connecticut on March 20, 1792. His father had emigrated from Scotland in 1773. While little is known about his early schooling, it is known that Mitchell found the quality of early geography text books to be lacking, and determined that he would write and publish better works. This decision led him to relocate to Philadelphia in 1829 or 1830, which was then the center of commercial publishing in America.

Mitchell’s first cartographic work was the re-issue of Anthony Finley’s New American Atlas in 1831, a work first issued by Finley in 1826, in response to Henry Schenk Tanner’s monumental work of the same title, issued in serial format from 1818 to 1822 and as a complete work from 1823 onward. While the map content in Mitchell’s edition of the New American Atlas is the same as Finley’s edition, each map has been significantly improved and revised, primarily with the addition of new towns and roads. This is especially true in the south and west. Finley had originally collaborated with D.H. Vance and J.H. Young in the preparation of the maps, although Vance’s name is removed from the Mitchell edition. Mitchell continued to work with Young, an association which would continue for several decades.

Mitchell was neither a cartographer nor an engraver. His primary function was as the editor and business manager of his publishing company, with Young working as the primary maker of maps. Beginning in 1839, Mitchell also began publication of his school atlas. This work and variant editions for older and younger students, was issued by Mitchell and his successors from 1839 to 1886. In 1845, Mitchell acquired the rights to Henry Schenk Tanner’s New Universal Atlas from Carey & Hart, which had previously acquired the copyright from Tanner and had published editions of 1843 and 1844. Mitchell changed many of the maps and issued two editions of the atlas in 1846. He changed the copperplates to lithography, utilizing Peter S. Duval in Philadelphia to produce the stones. Mitchell re-issued the atlas at least annually until 1850, when he sold the rights to the work to Thomas, Cowperthwait & Company.

In 1860, Mitchell’s son, Samuel Augustus Mitchell Jr. began issuing Mitchell’s New General Atlas. While his father had continued to issue wall maps and other works, this appears to be his son’s first entry into the trade. The New General Atlas was issued by SA Mitchell Jr. until 1887. From 1880 to 1887, Bradley & Company also published the atlas. Various other minor publishers, including A.R. Keller, produced editions as late as 1894. The elder Mitchell died in 1868. Samuel Jr. continued the business until the 1890s. At its height, the Mitchell Company employed 250 people and sold 400,000 publications annually.