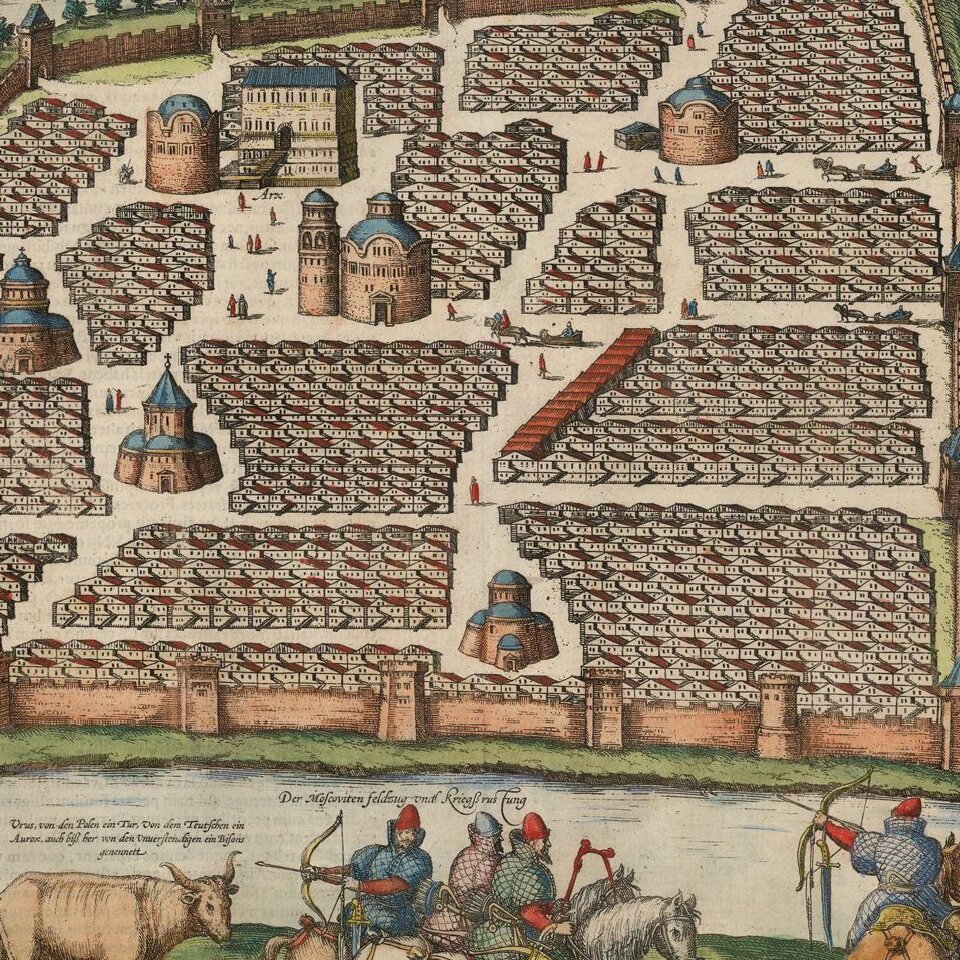 Decorative full color example of Braun & Hogenberg's first view of Moscow, from a slightly elevated viewpoint from across the frozen Moskva River, first published in 1575.

The walled center of the old city is depicted with its many churches. The map shows illustrations of people riding horse-drawn sleighs and a very early depiction of cross country skiers. In the foreground, two cows and a number of armed Russian soldiers are shown on horseback. These graphically reflected the growing military power of Moscow under Grand Duke Ivan IV (Ivan the Terrible), who was the first to assume the title of Tsar of Russia and who established the city as the capital of the Grand Duchy of Russia in 1547, not long before this image was made.

The view appeared in Braun & Hogenberg's Civitatus Orbis Terrarum, the most important town book of the 16th Century. Braun compiled the work while serving as the Canon of Cologne, drafting plans to produce over 500 city views and maps. The work was published in six parts between 1572 and 1617. Most of these engravings were made by Simon Novellanus and Frans Hogenberg, often after drawings by Joris Hoefnagel.

This is the first of the two plans of Moscow done by Braun and Hogenberg. A second appeared in the last volume, published in 1618, necessitated by Ladislas of Poland, who rampaged through the city in 1611.

Cartouche Translation: Moscow, capital of the eponymous region, twice as large as Prague in Bohemia, has wooden buildings, many streets, but scattered, with wide spaces in between them. The Moskva irrigates the city. Braun's text, in English: "But because of its size the city has no proper end and also it has not been sufficiently fortified with walls, moats or ramparts, but the streets are closed with barriers at several places; when night falls, a strong guard is placed there, so that no one can pass through at night after a certain hour. [...] The Moskva River flows around part of the city, and it is joined very close to the city by the Yauza, which, due to its high bank, can only rarely be waded through."