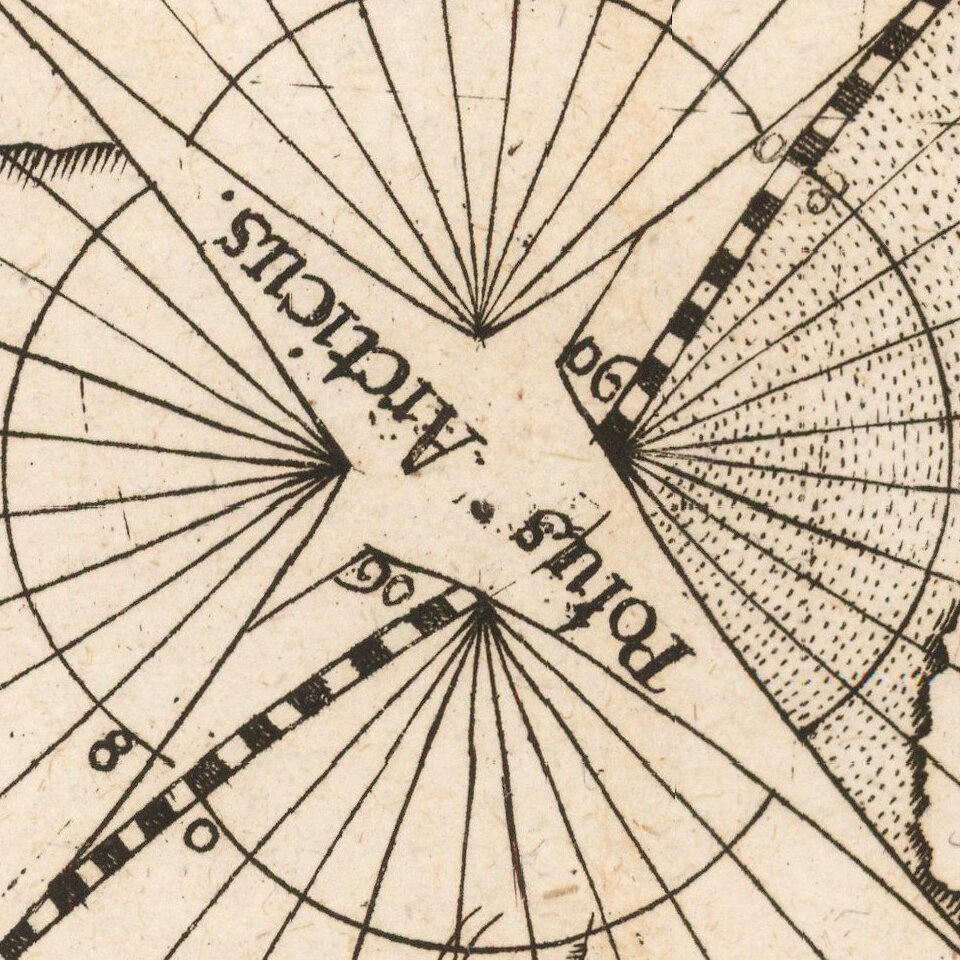 Highly unusual gore map of the Northern Hemisphere by German minister, mapmaker, and surveyor Daniel Angelocrator, employing a projection apparently of his own invention or adaptation. Derived from the work of Dutch cartographer Nicolaes van Geelkercken.

The map shows the Northern Hemisphere divided into four equilateral spherical triangles, with the North Pole at the center. Western Canada and present-day Alaska are in the top quarter; Asia and Northeast Africa in the right quarter; Europe, Northern Africa, the Middle East, and the Black Sea region in the bottom quarter; and North, Central, and part of South America in the left quarter. The top quarter shows the extreme westward extension of North America, causing the North Pacific to become very narrow where the top and right quarters face each other. This is a noted characteristic of Geelkercken’s 1616 world map, whose geography was the model for Angelocrator’s work.

In the present map, land masses are delineated with shading at their edges, while bodies of water stippled with a uniform dotted pattern. Major lakes and rivers snake across land masses.

The present map was issued with a companion sheet of the southern hemisphere, as well as with two other sheets which group the octants into eastern and western hemispheres; together, the four sheets comprise were part of Angelocrator’s 1628 work, Doctrina de Ponderibus, Monetis et Mensuris per Totum Terrarum Orbem Usitatis, printed by Johann Nicolaus Stoltzenberger. The work discusses surveying techniques, solid and liquid substances, ancient and modern weights, precious metals, and money.

World Map Projections in the Renaissance

During the Renaissance, rapidly expanding geographical knowledge of the world necessitated new ways to depict the globe. Mapmakers starting in the late fifteenth century worked to modify Ptolemy’s projections of the oikumene, or known world, to create maps that depicted the whole world. With Portuguese exploration of the Southern Hemisphere and the Americas starting in the fifteenth century, new map projections were needed to accurately depict the effective doubling of the world.

According to Snyder, “The map could be expanded in three main ways: by simply doubling the traditional circular representation of a hemisphere; by geometrically projecting the whole world into a single geometric figure, such as a rectangle or an oval; or by splitting the world into a number of small geometric pieces (gores) that could be used to make globes.” It is this last method that Angelocrator used in the present map, dividing the world into eight equilateral spherical triangles, or octants, four of which are seen in the present map.

The earliest extant globes, from the late fifteenth century, did not actually require projection, as the spherical surfaces were painted on directly. Starting in the sixteenth century, though, globes were made by pasting strips (gores) onto a ball. These gores could be of various thicknesses and could either extend from pole to pole or pole to equator (as in the case of the present map), usually along meridians ten to thirty degrees apart. This method was also projected onto paper maps.

One of the first uses of spherical octants can be seen in a ca. 1514 mappamundi controversially and uncertainly attributed to Leonardo da Vinci, which groups the octants in fours around each pole, as in the present map. While this map did not show intermediate meridians or parallels, a 1551 map by French mathematician and cartographer Oronce Finé added meridians and parallels as circular arcs within each octant. This technique can be seen in the present map. Angelocrator uses this unusual method of gore globe projection to portray the world from a unique perspective.