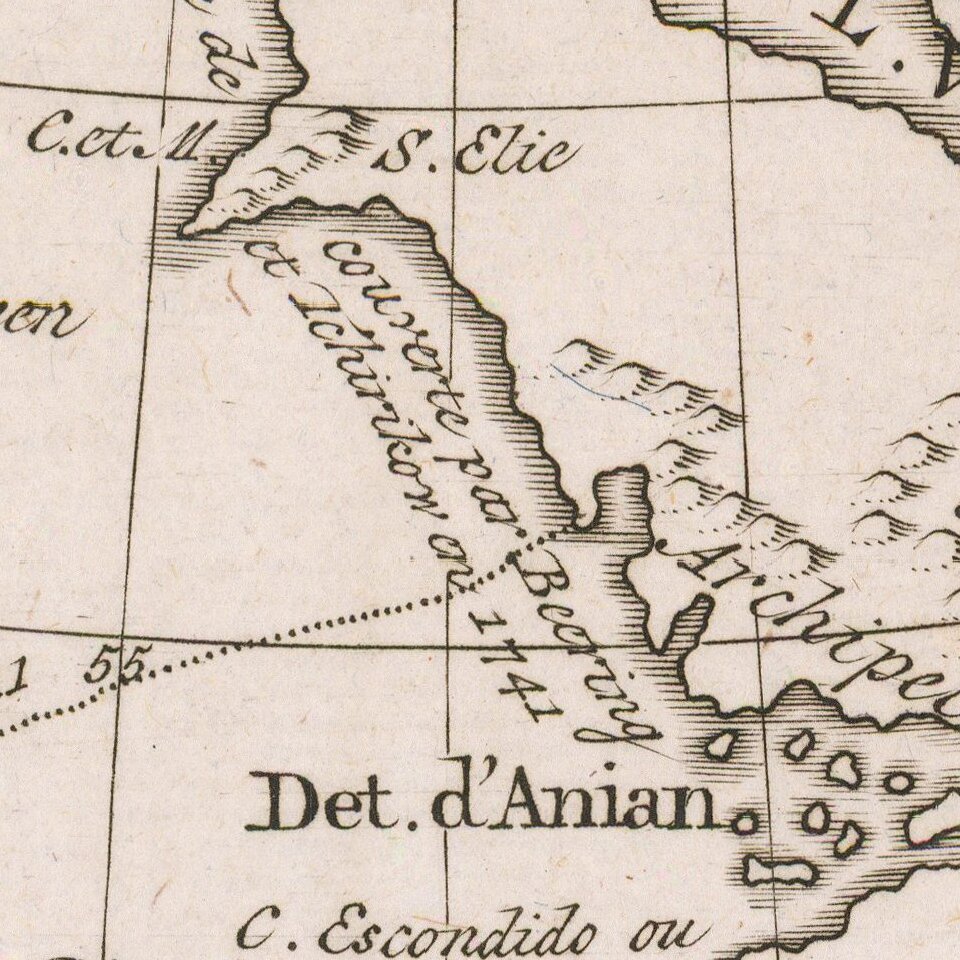 Didier Robert De Vaugondy's Nouveau System Geographique . . . represents the final major cartographic work in perhaps the most important scientific debate in the history of cartography, which occupied the collective energy of the greatest French mapmakers during the third quarter of the 18th Century.

Offered here in an extremely rare Dutch edition dated 1777, the map is a fascinating and highly important artifact of cartographic history, representing the historical highpoint of the French scientific inquiry into the search for the Northwest Passage and the competing cartographic theories underlying this inquiry, as well as the final map proposed by the De Vaugondy family as part of the more than two decade cartographic family feud with the De L'Isle/Buache family of mapmakers.

Beginning with Joseph Nicholas De L'Isle's return from St. Petersburg in 1747 and his publication of the Carte Des Nouvelles Decouvertes Au Nord de la Mer de Sud . . . 1750, the French cartographic community was gripped with an intense period of scientific inquiry into the proper way to depict the Northwestern regions of North America and the contiguous polar regions and Northeast coast of Asia.

Over the next decades, J.N. De L'sle and his professional heirs, Philippe Buache and Nicholas Buache de la Neuville on the one hand, and the Robert de Vaugondy family (Gilles and Didier) on the other, would regularly appear before the French Royal Academy to present their increasing argumentative views on this topic. In the process, they would create more than 20 maps and written presentations advocating their respective theories and pushing forward the cartographic knowledge of the region. The first significant map in this debate is Buache's Carte Generale des Decouvertes De l'Amiral de Fonte Et Autres Navigateurs Espagnoles, Anglois et Russes, pour la recherche du Passage a la Mer du Sud . . . Septembre 1752. In this map, Buache begins the process of trying to add, subtract and reconcile the various fact, conjecture and myth which surrounded the contemporary cartographic depictions of this region.

A side by side comparison of the two maps, produced in 1752 and 1774 respectively, but with a nearly identical body of information to work from, provides a remarkable graphic depiction of how two highly respected mapmakers could reach radically different conclusions on how to depict the region. Perhaps just as fascinating is that neither mapmaker intended for their map to only provide the most accurate information. In both cases, the French tradition of presenting a range of cartographic ideas for the same geographical space is also very much in evidence in these two maps, a well as a third map produced by De Vaugondy, his Carte Systematique (discussed later in this essay).

Ironically, the resolution of the debate would end not with a clear French victor, but instead by an Englishman, Captain James Cook, whose visit to Alaska and the Northwest Coast in 1778, during this third voyage to the Pacific (1776-1779), would terminate this decades old French debate. In a single visit, Cook charted the majority of the North American north-west coastline for the first time, pushing forward the cartographic knowledge of the coastlines from just south of the mouth of the Columbia River to the Aleutian Islands and thereby mooting what can, in retrospect, be called the greatest cartographic debate of the 18th Century.

The present map follows Didier's Robert de Vaugondy's presentation in 1773 of his most up to date presentation of his theories on prospective navigation in the high latitudes of the North America and the presentation of a polar map presenting De Vaugondy's conclusions on what he believed was a viable route from the Atlantic to the Pacific, which was also published in 1774 and which was approved by the Academy for publication.

De Vaugondy followed the Carte Polaire with one final work, the Memoire sur les Pays de l'Asie et de l'Amerique situes au Nord de la Mer du Sud (Paris: Boudet, 1774), which included the present map. De Vaugondy intended the map as a graphic depiction of the comparative cartographic debate over how to synthesize competing conjectural theories and generally incomplete and disparate information onto a single sheet of paper. In the tradition of his predecessors, dating back to Guillaume De L'Isle, De Vaugondy embraced a willingness to depict questionable information, so long as the information wasn't completely contradicted by more reliable cartographic source information.

This attempt to reduce multiple and inconsistent details onto a single sheet of paper has, in modern times, been misconstrued by a number of commentators as Robert De Vaugondy's attempt to perpetuate the alleged accuracy of outdated and erroneous information. In fact, exactly the opposite was true. As note by De Vaugondy in his final Memoire,

"It may seem astonishing that after the publication of the works of MM. Delisle and Buache on the relative positions of Asia and America, someone could find something more to say on the subject. My aim is merely to reconcile the works of these two authors with some prior information and perhaps to introduce some possibilities and probabilities in so doing. Thus will we have the means of arriving at the truth, which should be the object of all research". (Translation drawn from Bill Warren's A Most Curious Map: http://www.artwis.com/articles/a-most-curious-map/ )

As noted by Mary Pedley:

[In 1774], Vaugondy continued his "northern" presentations to the Academy with the Memoire . . .. As a supplement to his previous work, this paper discussed current knowledge of northeast Asia and north west America and was illustrated by a "Nouveau System Geographique par lequel on concilie les anciennes connoissances sur les Pays nord-ouest de l'Amerique avec les nouvelles decouvertes des Russes au nord de la Mer du Sud" [A New Geographical System in which older informaiton on the northwest of America is reconciled with the new discoveries by the Russians in the north Pacific] [Cat. 456] Vaugondy called it a "Nouveau Systeme" to differentiate it from his Carte Systematique of 1768. in fact, the two maps are quite different, especially regarding the Aleutian islands and the land of Yeço.

Like in the "Essai d'une carte polaire," this map did not pretend to show a geographical reality but attempted to reconcile different geographical hypotheses . . . De Vaugondy stressed that his map was a "system" by which discoveries, whether real or not, might be illustrated; it was not a depiction of the true nature of the land or sea. To emphasize this caveat, he opened his treatise with Cicero: " . . . (We follow things which are probable; we can not proceed beyond that which is likely to be true; and we are ready to refute without stubborness and be refuted without anger.) . . . Didier Robert de Vaugondy's willingness to present the de la Fuente discoveries in this new system was an extension of the positive geography . . . comparing and reconciling differences. When faced with regions about which no information is certain, the geographer can only try to co-ordinate equally uncertain accounts. The de la Fuente story, though in itself improbable, did in fact coincide with earlier explorers' accounts. Indeed, this was the basis on which Philippe Buache had accepted the de la Fuente narrative twenty years earlier. Thus, reasoned Buache then and Vaugondy now, any truth in de la Fuente's explorations would be confirmed by the more secure authenticity of others who described similar geography. On the other hand, Vaugondy continued to reject the Sea of the West because it did not coincide with earlier accounts or with the more recent reports from the Indian Moncacht-Ape . . . The Indian reported not a sea in the west but a great river, La Belle Riviere, that flowed from the center of the continent to the Pacific. In addition, the Indian described a salt lake, 300 leagues long and 30 leagues wide, similar to that reported by Baron de La Hontan at the end of the seventeenth century, shown by Guillaume De L'Isle on his map of Canada in 1703. Thus not only the location but existence depended on reconciliation of sources. * * * By such operations, Didier Robert de Vaugondy worked towards a system which would illustrate a current state of "probable" knowledge by reconciling all sources. Unfortunately, Didier's adjudicators at the Academy were not persuaded by his results: "He [Vaugondy] opposes conjectures with conjectures, arguments with arguments, relations which are hardly decisive with relations only a little more conclusive. An unbiased mind would leave this discussion a little more uncertain than it was before." Robert de Vaugondy's intent, however, was to stress that a northwest passage was highly conjectural and fraught with problems, and that the polar route he advocated offered a greater chance of success. The arguments in the Memoire sur les pays septentrionaux very much reflect the sentiments of Engel found in the Encyclopedie. Vaugondy quotes his correspondence with Engel throughout the Memoire, and it is probably safe to attribute the logic supporting the northeast passage to Engel rather than to Vaugondy, whose concern was to illustrate the idea.

The De Vaugondy map is very rare on the market, as is this 1777 Dutch Edition, which is the only example we have ever seen.

A fine example of this exceptional rarity.

Gilles Robert de Vaugondy (1688-1766) was the head of a leading family of geographers in eighteenth century France. Gilles got his start when he jointly inherited the shop of Pierre-Moullart Sanson, grandson of the famous geographer Nicholas Sanson. The inheritance included the business, its stock of plates, and a roller press. In 1760 Gilles became geographer to King Louis XV. His son, Didier Robert de Vaugondy (ca. 1723-1786), was also a geographer and the two worked together. They were known for their exactitude and depth of research. In 1757, they produced the Atlas Universel, considered an authority for many years.