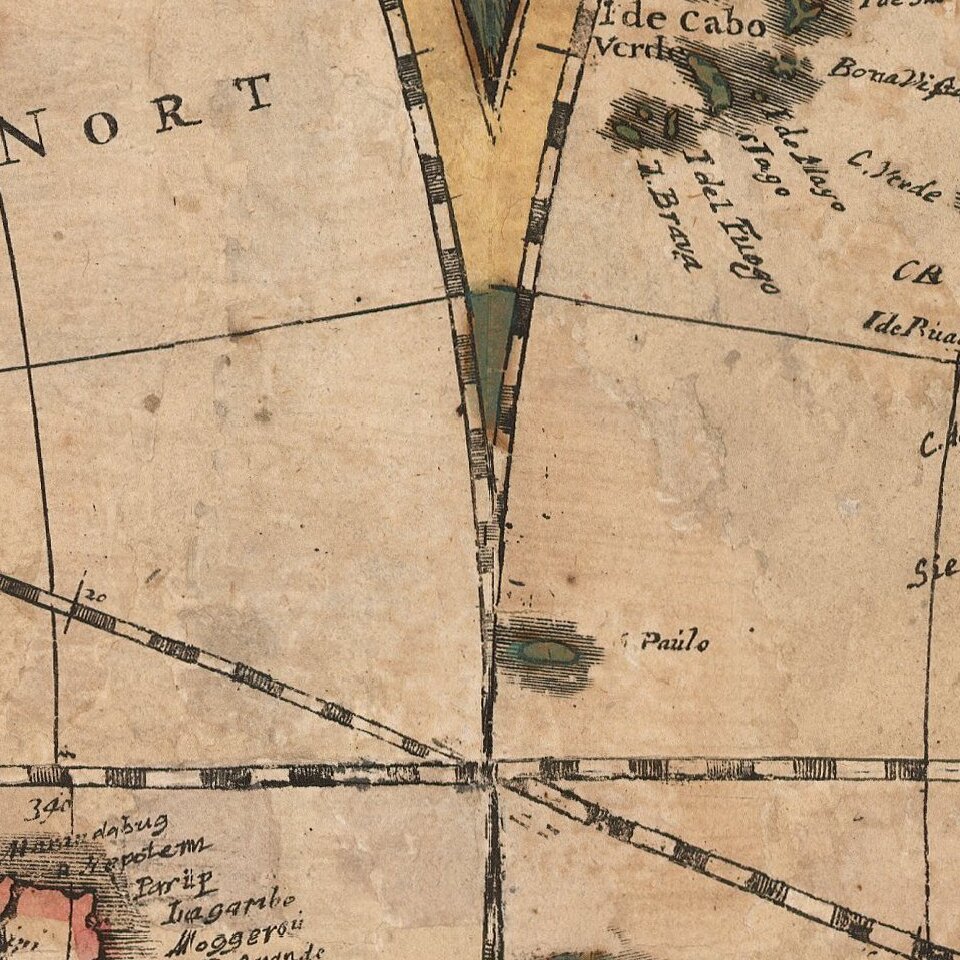 Old color example of this unrecorded 4-sheet wall map of the World, published in Amsterdam by Cornelis Danckets.

The present example is an extraordinary survival, being the earliest surviving state of a wall map previously believed to have only survived in a single late state by Johannes Van Keulen, but posited by Rodney Shirley to have existed in earlier states. The survival is made all the more remarkable by the extraordinary bold original color in which the map survived, as most 17th century wall maps typically have severally faded or broken color remnants.

The map includes a dedication portrait to Prince Wilhelm III, which would seem to be an erroneous spelling for Prince Wilhem Hendrik of Orange, better known as William of Orange (the family coming from Dillenburg in Nassau, Germany). The Prince of Orange from birth, Wilhem Hendrik would become King of England, Ireland and Scotland from 1689 until his death in 1702. In 1672, he became Stadtholder (National Leader) of Holland, Zeeland, Utrecht, Gelderland and Overijssel in the Dutch Republic, the title he likely held at or about the time the map was created. As such, while Shirley concludes below that the map was printed as early as 1668, we think it more likely that the map's creation more likely occurred around the time of William of Orange becoming Stadtholder of 5 of the states of the Dutch Republic.

In his Mapping of the World, Rodney Shirley notes:

So far, the author of this outstanding four-sheet world map has not been identified. The only copy known, in the University of Leiden, carries the imprint of J. Van Keulen, almost certainly over an earlier impression which has been erased. Van Keulen's issue is unlikely to date before the 1680s.

The exterior details of the map is a graphic enlargement, down to the smallest detail, of the vivid surround of De Wit's maritime world map of 1668 [engraved] by Romeyn de Hooghe . . .The artistry of this large four-sheet map is no less distinguished and it is either a masterly copy or perhaps even a predecessor original by De Hooghe on which no trace of his signature can be found.

Considerably more geographical detail is shown on the two large hemispheres: in addition there are certain features pointing away from De Wit as the sole source. The flattened shape of the top of California (as an island), the retention of the large undefined lake in the centre of North America, and the prominent marking of Xamo Desertuim are all features found on Visscher's prototype world maps (from 1658 onwards) and not on later updated maps such as those by Sanson and De Wit. Australia is however more precisely defined with both the west coat and the northern coastline (as it joins on to New Guinea) being drawn without any break. . . . . On the left hand lower hemisphere is two water nymphs carrying an oval portrait of Wilhelm [sic] III, the date of his death [actually the date of his being crowned king of England] in 1672 providing a terminal date for the original map [a conclusion we question).

It is possible that this map was prepared several years earlier, in the mid-1660s by De Wit and De Hooghe. In 1668, the map was then redrawn in a single sheet form . . . Further evidence of De Wit's earlier collaboration with De Hooghe would be needed to support this reasoning, and a copy of the map, in its first state, if it could be found, might provide this.

The De Wit / Danckerts credit on this state of the map confirms Shirley's conclusions that the map was engraved by Romeyn De Hooghe for Frederick De Wit and a comparison of the present example with the Van Keulen strongly suggests that this example pre-dates the Van Keulen state. Most notably, the absence of De Wit's name on the Van Keulen state is strong evidence that Van Keulen acquired the copper plates after Danckerts.

This is the only known example of this state of the map. A single example of a later state exists in the University of Leiden, as noted above.

De Wit (1629 ca.-1706) was a mapmaker and mapseller who was born in Gouda but who worked and died in Amsterdam. He moved to the city in 1648, where he opened a printing operation under the name of The Three Crabs; later, he changed the name of his shop to The White Chart. From the 1660s onward, he published atlases with a variety of maps; he is best known for these atlases and his Dutch town maps. After Frederik’s death in 1706, his wife Maria ran the shop for four years before selling it. Their son, Franciscus, was a stockfish merchant and had no interest in the map shop. At the auction to liquidate the de Wit stock, most of the plates went to Pieter Mortier, whose firm eventually became Covens & Mortier, one of the biggest cartography houses of the eighteenth century.