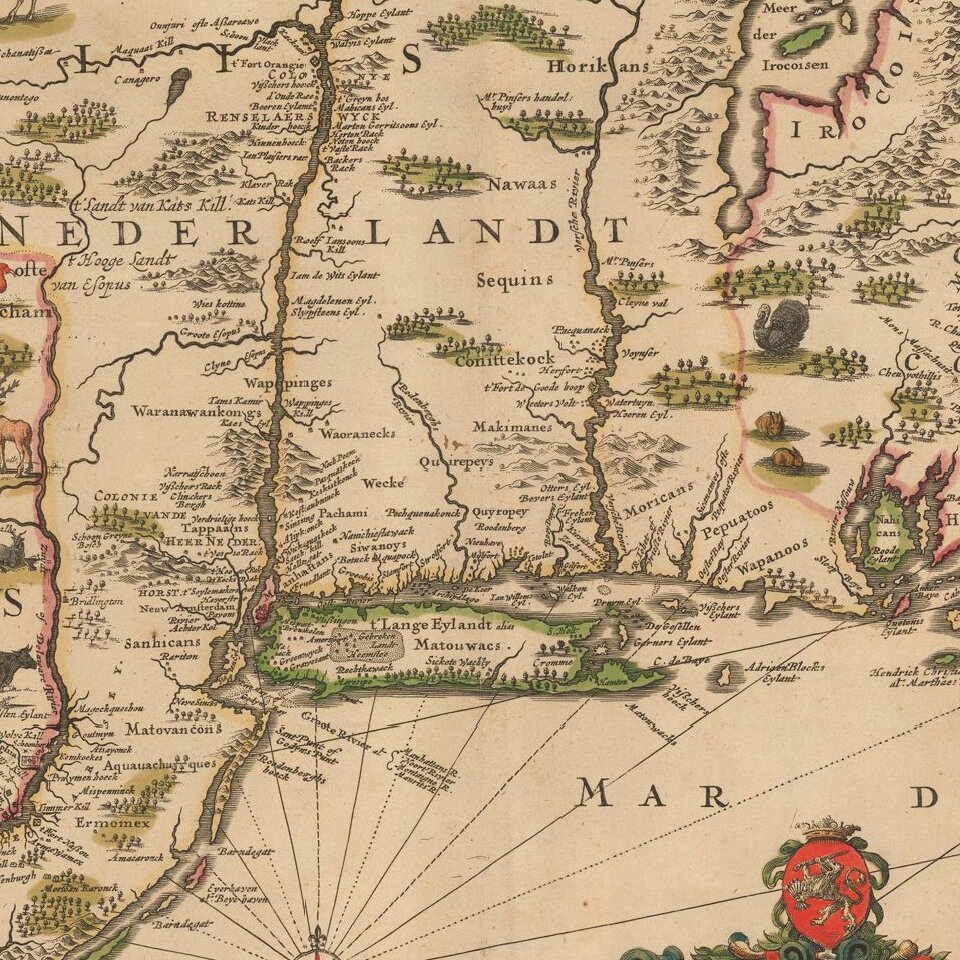 A very attractive example from this famous and much sought after map, with an inset view of the Dutch colony on Manhattan Island, the second published view of New York, after Hartgers view of 1651. The cartographic information is based upon Jansson's map of 1650. In 1655, Danckerts copied Nicholas Visscher, who in turn utilized Jansson's map, with its vignettes of animals and Indian life, and added this now famous view of New Amsterdam, showing the Battery and Dutch buildings on the waterfront.

An extensive study of the map by Stokes suggests that the view was drawn sometime between 1653 and 1655, prior to the construction of New York's wall. The first state of the map, copied from Visscher's map, also omits Philadelphia. This second state was issued in about 1684 and shows Philadelphia for the first time, as well as adding farm animals. As noted by Burden:

Following the founding of Philadelphia a revised state was produced. However, unlike the competing maps which largely confined themselves to the city's addition, Danckerts updated the map in a significant manner. The Delaware River is completely revised so that it no longer connects with the Hudson River. Richard Daniel's A Map of ye English Empire . . . c. 1679, had depicted a similar river system. Pennsylvania is named, its boundary is marked, and many largely domesticated animals are engraved within the region. Recognition of the English hold over New Amsterdam is seen in the addition to the title to the view of Nieuw Yorck, eertys Genaemt above. . .

The addition of domesticated farm animals in the New Netherlands colony is of historical note. The Dutch colonists were, by the 1680s, increasingly disillusioned with the support they were receiving from Holland. A delegation was sent to Den Haag to appeal for more support, money, settlers, etc. One of the by-products of the colonist's meeting / plea was the revision of this map as a propaganda tool, displaying farm animals in New England in order to entice prospective new colonists to emigrate, on the theory that life in the New World was similar to life in Holland.

The present map is state 2 of the map, which can be identified as follows:

Striking example of this important map.