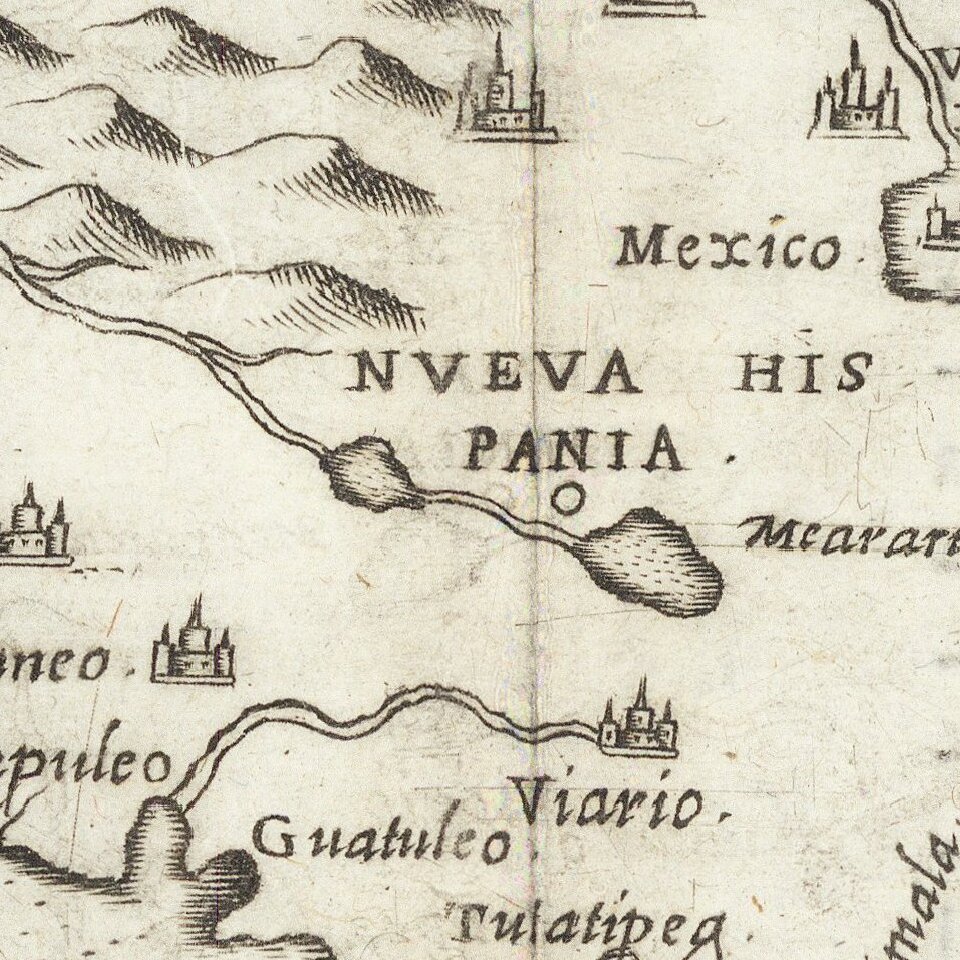 Rare and influential regional map of the American South and Mexico, featured in Ruscelli’s edition of Ptolemy’s Geographia. This is an example of the scarce third state, which contains many additional place names.

Girolamo Ruscelli’s map of New Spain is based on Giacomo Gastaldi’s 1548 map; the Ruscelli is an enlarged version. The only major revision is that the Yucatan Peninsula is not portrayed as an island as it was on the Gastaldi. The map remained the best and most influential representation of the region until Wylief’s maps of 1597 and it is the second earliest obtainable map of the area.

First published in 1561, the map illustrates the territory and natural features of New Spain, today the Gulf Coast region, the American Southwest, and Mexico. It also shows Florida, then a Spanish holding, and the west of Cuba.

Several prominent rivers are featured, including the Mississippi River (R. Spiritu Santo) and the R. Tontonteanc, which is either the Gila or the Colorado River. Mountain ranges such as the Peninsular Range on the west coast and the Sierra Madre Occidental Range of northeastern Mexico are also included.

While the map does illustrate some major cities in Mexico—including one labeled “Mexico”, which was formerly the Aztec city of Tenochtitlan—it does not acknowledge the presence of indigenous peoples who predated Spanish settlement.

The third state of the map (1598 and after) can be quickly distinguished from earlier states by the addition of the sailing ship in the Pacific.

This map holds historical significance as it is an early cartographic representation of Spanish holdings in North America. The mid- to late-sixteenth century was a time of rapid expansion and urbanization across the territory, with Spanish colonizers and explorers seeking to establish outposts for the purpose of conquering land and evangelizing indigenous peoples. Many of the place names are reflections of the Spanish presence in the region, pioneered by explorers such as Cabeza de Vaca, Moscoso, and Pineda.

Alonso Álvarez de Piñeda was the first European to create a map of the Texas Gulf Coast. Indeed, his maps are some of the only documents historians have to study his life. He is credited with encountering and naming Corpus Christi, Texas, and explored the area that is now Brownsville, Texas. His voyage, which resulted in his death at the age of 25, proved that the Gulf of Mexico did not house a viable route to the Pacific Ocean.

Álvar Nuñez Cabeza de Vaca was known for being among the first Europeans to explore the interior of what is now Texas after he and his crew shipwrecked on the Texas coast in 1528. While Cabeza de Vaca did not acquire any new territory for Spain, he and his companions spread rumors of unfound riches in North America which prompted a wave of Spanish exploration of the continent in the following years.

Luis de Moscoso de Alvarado was one of the most prominent explorers sent in search of these fabled riches by the Spanish government. While the initial goal of Moscoso and his companions was to find riches, Moscoso decided to focus on finding an overland route from the Mississippi River to Mexico after Hernando de Soto, the expedition leader, died. In the process of finding a route to Mexico, Moscoso became one of the first Europeans to explore East Texas before sailing to Mexico along the Mississippi River and Gulf of Mexico.

This map has three states and featured in editions of the Geographia from 1561 to 1599. This is a third state, which is scarce on the market, much more so than the earlier editions..

1st State, 1561: The plate mark goes off the top of the page and is not visible.

2nd State, 1574: The plate mark is corrected, with the plate visible running across the top of the page. The graduation marks are now cross hatched.

3rd State, 1598: Many embellishments and additions are made. A ship is added in the MARE PACIFICVM. New labels are added including CALMIFOR (California), SIERRA NEVAD (Sierra Nevada), and GOLFO MEXICANO (Gulf of Mexico).

This is perhaps the most influential map of the Southwest during the sixteenth century. It is also one of the earliest maps of the region and is an important contribution to knowledge of the geography of New Spain.