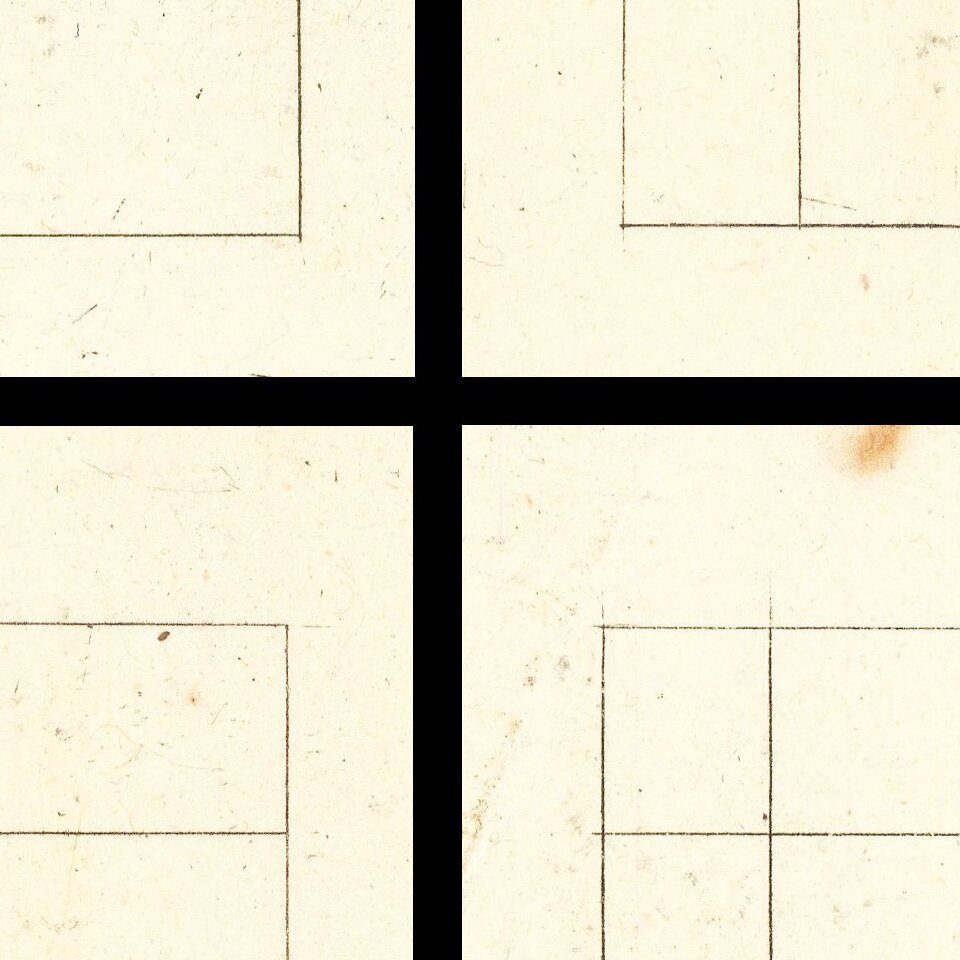 Stunning, Large-Format Map of the Pacific, the Origin of the Toponym Oceania

Fine example of A.H. Brué's four-sheet map of the Pacific Ocean, first published in Paris in 1814 and here updated to 1817.

The title in the upper left corner indicates that this map shows the fifth part of the world, Océanie. This name for the islands of the Pacific was first used by Brué in his Pacific maps, including this one. By the 1830s, the term was in wide use around the world.

This example is an updated edition of Brué’s original, multi-sheet map of the Pacific, an impressive and intricately-engraved tour-de-force showing the world’s biggest geographic feature. It was included in Brué’s Atlas Universal, his most famous publication.

The Americas, Asia, and Australia ring the Pacific, which is shown from the mid-50 degrees of latitude, north and south. The Aleutian Islands stretch nearly to Kamchatka, while the “Grand Ocean Austral” is open, with New Zealand as the only landmass so far south. It is accompanied by a small inset showing the most southerly islands of the archipelago. Filling the bottom left corner is a dedication to a “Monsieur,” although which specific mister is unknown.

The Grand Océan is split into three huge regions, linking islands and archipelagos together. Farther west is Grand Archipel, or Maritime Southeast Asia, containing Malaysia, Indonesia, the Philippines, and New Guinea. Taking up the central area of the ocean is Polynesia, stretching from the Carolines and Marianas to the Marquesas and Easter Island, the most remote inhabited island in the world. The final region is Australase.

These regional divisions predate the popularity of the still-used regional monikers of Polynesia, Melanesia, and Micronesia. These were coined by French explorer Jules Dumont D’Urville, who commanded the Astrolabe on a Pacific voyage from 1826 to 1829, and were based on arbitrary racial classifications.

Regional names flank the coasts, which often point to the imperial power which claimed that area. For example, in the Pacific Northwest of North America, the ongoing colonization of the area is evident. To the north is Amerique Russe, a nod to the Russian settlements and fur trading outposts. Further south is Nouvelle Hanovre and Nouvelle Georgie, indicating British claims, largely those made by George Vancouver on his Pacific voyage of 1791-95.

The only other information shown inland on the land masses are rivers. These are abundant in the Americas and the part of Asia not covered with the title cartouche. In Australia, however, they are practically non-existent, revealing how little was known about the interior of the continent. The only places with topographic information are near Port Jackson, Sydney Cove, and Botany Bay—the site of the British penal colony—and a few high points that could be seen from a ship on the south coast.

Brué is explicit about his sources in the text block below the title cartouche. This analysis explains that his projection is based on the charts of Louis Freycinet, whose work is described below. He also used the recent maps and charts of Arrowsmith, la Pérouse, Krusenstern, Flinders, Dalrymple, D’Entrecasteaux, Marsden, Fleurieu, as well as older maps by de D’Anville. He also had access to maps from Humboldt and those published to illustrate the Lewis and Clark expedition, as well as the overland journeys of Mackenzie and Pike.

While the interior is empty, the shores of Australia are thickly labeled and finely drawn. This is thanks to a series of voyages that charted Australia. The most prominent of these were those of Nicolas Baudin and Matthew Flinders around the turn of the nineteenth century. Indeed, Brué served on the Baudin expedition as a teenager and was very familiar with the hydrography and cartography of the voyage.

When Nicolas Baudin left Le Havre in the Geographe in October 1800, he was embarking on a voyage meant to survey the shores of Australia. He was accompanied by the Naturaliste, commanded by Captain Jacques Felix Emmanuel Hamelin, whose crew included the young naval officer Louis Freycinet. At this time, the British had established their presence in eastern Australia, but the western and southern portions of the continent remained unexplored and not necessarily claimed by the British. In other words, although ostensibly a scientific expedition, the French were also open to possible overseas expansion if the opportunity arose.

Initially the ships, sometimes separated, made their way north up the western coast of Australia from Cape Leeuwin to Timor. They then went south again, but were separated a second time. Baudin and the Geographe made for Van Diemen’s Land and then returned toward the west.

En route, they encountered British naval officer Matthew Flinders in the Investigator. Flinders had initially begun his charting of Australia in the southeast in the mid-1790s, where he surveyed and named the Bass Strait. By the time he met Baudin, Flinders was on his third Australian surveying mission. He was heading to Sydney, from where he would begin a clockwise circumnavigation of the Australian continent, the first such voyage to ever do so.

Baudin and Hamelin were reunited in Sydney, where both ships had come to recuperate in late 1801. During the course of 1802, the Geographe and the Casuarina, a survey vessel purchased by Baudin and commanded by Freycinet, surveyed the southern coast of Australia (the Naturaliste had been sent back to France). They then sailed round the west coast to Timor, then back to Mauritius, where Baudin died. It was also where the Casuarina’s career ended, as the ship was abandoned in favor of consolidating the crews on the Geographe. The ship returned home on March 25, 1804.

Flinders was not so lucky. On his homeward voyage to Britain in late 1803, Flinders was forced to stop in French-controlled Mauritius due to the poor condition of his ship. As Britain and France were then at war, the governor of the island arrested Flinders, detaining him (in relative comfort) for seven years (1803-1810).

Flinders worked on his charts of Australia while in Mauritius, but he was unable to publish them in full. Instead, the first map of the continent, which would have been a source consulted by Brué, was by Freycinet. It appeared in an atlas of the Baudin expedition, released in 1811.

Charting Australia in the seventeenth century

However, Brué’s map also includes older Australian toponyms. These, which are used to describe coastal regions demarcated by dashed lines, are Dutch in origin. The Dutch were the first Europeans to encounter western Australia, in large part due to being blown off course by the roaring winds of the higher latitudes.

In the north of Australia is Terre D’Carpentarie, so named in 1623 by Jan Cartensz after Peiter de Carpentier, the VOC governor of the East Indies at that time. Carstensz was not the first Dutchman in this area, however, as Willem Janszoon visited what is today Queensland on his voyage of 1605-6, the first European to encounter Australia. Terre D’Arnhem, just to the west, refers to the Arnhem, a Dutch East India ship and one of the two ships that sailed with Carstensz, which sighted the area in 1623.

Farther west is Terre de Witt, which recalls Gerrit Frederikszoon de Witt, captain of the Vianen, which sailed in 1628. Next is Terre D’Endracth. The Endracht was the second recorded European ship to contact Australia (1616), and the first in western Australia. The Eendracht was blown off course en route to the East Indies in that year. It was commanded by Dirk Hartog, whose name is on an island here. The crew commemorated their discovery by erecting a post with a pewter dish inscribed with their ship’s information—the earliest physical record that historians have of any European landing in Australia.

Terre D’Edels is named for Jacob d’Edel. In the Amsterdam, along with Frederik de Houtman in the Dordrecht, d’Edel came within sight of the western coast and called the stretch of land d’Edelsland. Terre de Leuwin is named for the Leeuwin, whose crew charted some of the southwest coastline in 1622; Flinders would later name Cape Leeuwin (here C. Leuwin), the southwestern-most point on the Australian mainland, after the ship. The final Dutch name for a stretch of coast is Terre de Nuyts; Pieter Nuyts, a Dutch navigator, commanded the Gulden Zeepaert along the southern coast in 1627.