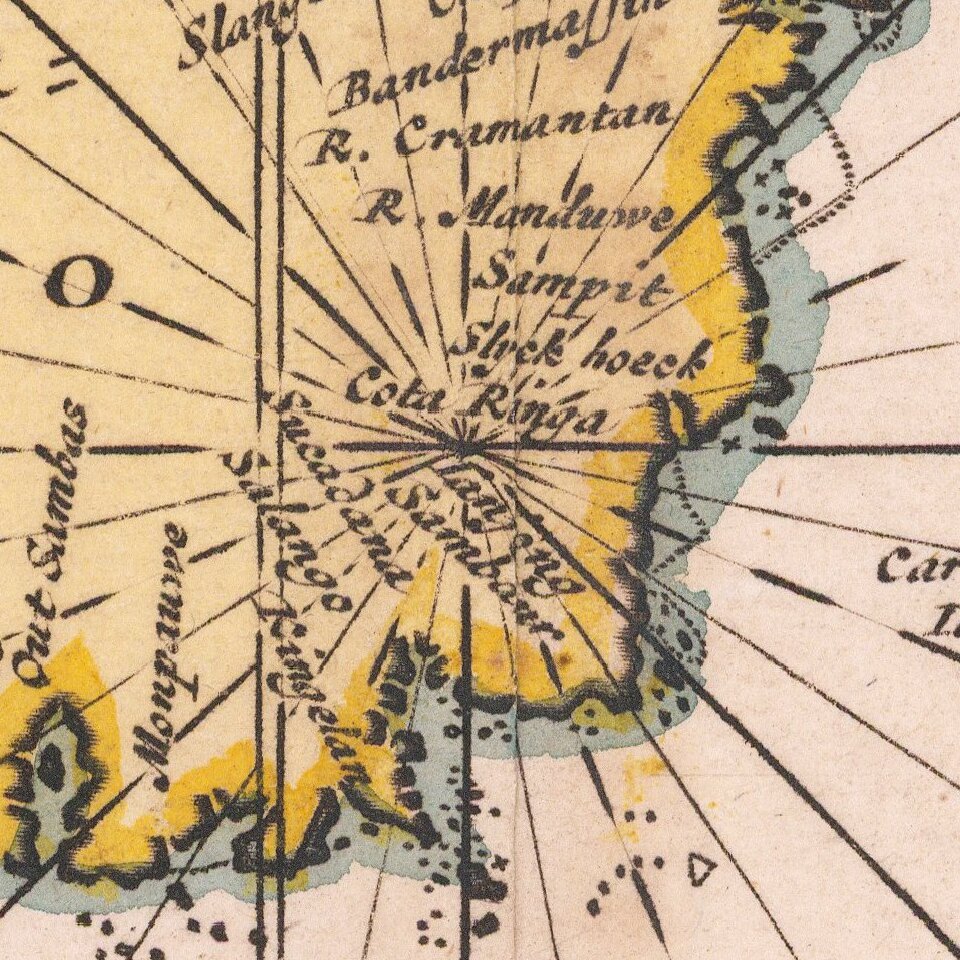 An Important Early Dutch Sea-Chart of Australia, the East Indies and Eastern Part of the Indian Ocean.

The chart is east-oriented and covers the region from the Indian subcontinent to Japan in the east, and to Hollandia Nova, or Australia, in the south. Several ships-three European sailing sloops and one Chinese junk-are braving the waters, which are criss-crossed by rhumb lines.

In the lower left is a spectacularly decorative cartouche embodying the exoticized way that Europeans viewed the Far East. An Asian princess looks out from the window of a pagoda-like structure, a monkey at her side. She gazes out at a man in formal robes who is shaded by an umbrella held by a dark-skinned boy. Behind them a turbaned man smokes a pipe. At his feet are the spoils of the East Indies trade: baskets full of goods, textiles, another pipe (held by a parrot) and tea.

The chart is based in part on Pieter Goos' chart of 1666. Japan is shown on the Blaeu-Martini model. Martini Martino (1614-1661) was the author of the influential Novus Atlas Sinensis, published by Johannes Blaeu in 1655. Martino was a Jesuit missionary who served in China from 1642-1651, and again from 1658 until his death. There were a spate of new maps of China by Europeans in the mid-seventeenth century thanks to missionary activities. They followed the example set by the world map prepared in China by Matteo Ricci in 1602.

The chart includes much of the coastline of what would come to be Australia. The coastlines of Western Australia are based on early Dutch discoveries, mostly from shipwrecks, and the surveys of Abel Tasman during his two milestone voyages of the early 1640's. A note is on the southwest coast of Australia that explains that this was the area charted by the Leeuwin in 1622. The southernmost discoveries are shown with reference to the voyage of the Gulden Zeepaert, commanded by Frans Thijsz, in 1627. The Gulden Zeepaert was aiming for Batavia but ventured too far south. After finding his bearings, Thijsz explored farther east and named the land he saw Nuytsland in honor of Pieter Nuyts, the highest ranking East India Company (VOC) official on board.

Other noteworthy Dutch discoveries recorded here include the Eendracht, which was blown off course in 1616. It was commanded by Dirk Hartog; both his name and a note about the ship are included on this chart. Finally, G. F. de Wits Landt refers to land explored by the ill-fated Vianen, which was commanded by Gerrit Frederikszoon de Witt. On her first voyage , Vianen was supposed to sail with the VOC fleet for Europe, but an unbalanced load delayed her. When she again set out, the monsoon had set in and drove her so far south that she ran aground in northwest Australia. The crew managed to refloat the vessel and charted as they ran up the coast; they saw aboriginal peoples near present-day Roebourne, possibly the first sighting of indigenous Australians by Europeans in Western Australia. On her second voyage, from Texel for Batavia, Vianen sank in the Sunda Strait.

This is the first state of the map and it appeared in Frederik De Wit's Atlas de la Navigation (1675), one of the most striking products of Dutch maritime cartography. It was "thoroughly corrected" (Koeman) by Renard in the early eighteenth century and amended again by Ottens in 1745 for their editions of the atlas. Koeman explains, "this continuous revision proves that the atlas was intended for use at sea and not only for the consultation on shore."

It would have been used by ships trading in the lucrative East Indies. The Dutch entered a Golden Age in the seventeenth century thanks in no small part to their dominance of trade with the region; part of this cultural and economic renaissance was the ascendance in prestige and volume of the Dutch map trade. Frederik de Wit was part of this ascendance.

De Wit (1629 ca.-1706) was a mapmaker and mapseller who was born in Gouda but who worked and died in Amsterdam. He moved to the city in 1648, where he opened a printing operation under the name of The Three Crabs; later, he changed the name of his shop to The White Chart. From the 1660s onward, he published atlases with a variety of maps; he is best known for these atlases and his Dutch town maps. After Frederik's death in 1706, his wife Maria ran the shop for four years before selling it. Their son, Franciscus, was a stockfish merchant and had no interest in the map shop. At the auction to liquidate the de Wit stock, most of the plates went to Pieter Mortier, whose firm eventually became Covens & Mortier, one of the biggest cartography houses of the eighteenth century.