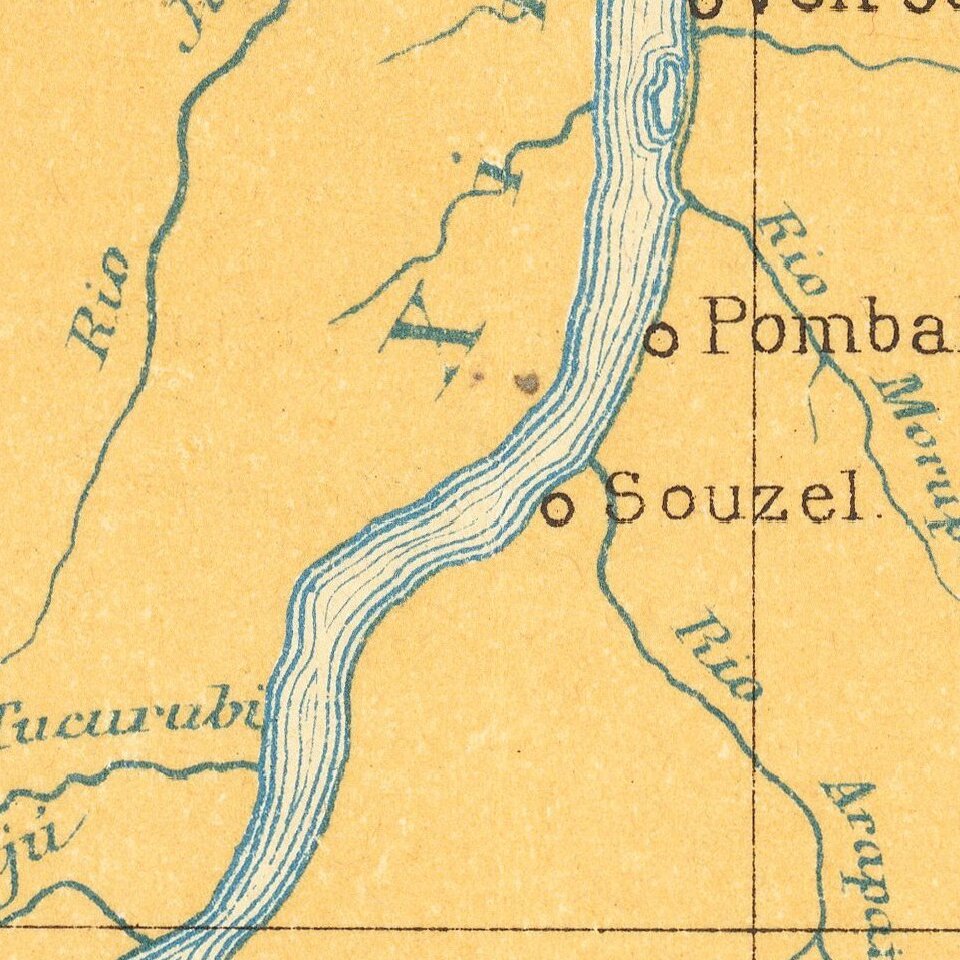 Rare Map of the Brazilian State of Pará, Including the Mouth of the Amazon River

Rare, separately-published map of what are today the Brazilian states of Pará and Amapá in northern Brazil. The map, which is the only example we could locate, offers a glimpse of a region that had recently undergone significant political and social change.

Oriented northward, this map gives a fine overview of the Brazilian state of Pará, including the edges of neighboring states such as Maranhão (Estado do Maranhão) and Mato Grosso (Estado de Matto Grosso) and colonies like the Guianas. In 1943, the north-central section of Pará shown here separated and became its own territory, Amapá. However, at the time this map was published in 1908, Amapá was part of Pará.

The map shows mostly natural features and has very few roads. One small road can be seen connecting the town of Ferreira Gomes with the city of Macapá. The Belem-Baranca Railway is also shown, including several small spurs which had only been completed in December of 1901. A few bridges and water-crossings can be found along the rivers, while towns are represented by circles and larger cities by black dots. The capital city, Belem, can be found near the coast, where the Amazon meets the Atlantic.

The river system displayed on this map is extensive and detailed, flowing from the far reaches of the state to the Atlantic Ocean in the top right corner. The most prominent river is certainly the Amazon, but many smaller tributaries are sketched carefully and labeled. In the larger rivers as well as the Atlantic coast, contour lines give a sense of depth to the water bodies. Similarly, topographical features such as mountain ranges and river valleys are indicated with hachures.

In the southern half of the state, the map is dominated by various indigenous groups and includes virtually no signs of European settlement. Only rivers and a few topographical features are shown, and the empty region farthest to the southwest is described as little-explored lands (Terrenos Pouco Explorados).

In the northeast corner, the cartographer has included a simple title block with the scale. The title explains that it was made at the behest of Senhor Augusto Montenegro, the governor of the State of Pará from 1901 to 1909. This map would have been created near the end of his time as governor. During his eight years in office, Montenegro was able to improve the water service and finances of the state, as well as complete the previously stalled Belem-Baranca Railway shown here and resolve disputes with the French over the territory that would one day become the state of Amapá, also shown here.

Though there are no visible political boundaries, the map shows the future state of Amapá only eight years after it became a part of Brazil and 35 years prior to becoming its own territory. Amapá is located in the northern-most part of Pará, and just south of French Guiana (Guyana Franceza).

During the nineteenth century, one of the major exports of this region was rubber. This valuable product, combined with the discovery of gold in the region in the late 1800s, led to an influx of outsiders into the area. The longstanding territorial dispute between Brazil and France over Amapá suddenly became very significant; French settlers had moved in and established the short-lived State of Counani (1886-1891), but Brazil had deep interests in the area’s resources as well. A remnant of this French-backed state may be found in the city of Conani near Mte. Mayé.

The dispute was finally settled in 1900 and the land awarded to Brazil by the Arbitration Commission of Geneva. It was at this point that Amapá was incorporated into the state of Pará. The region also bore the name Araguari after the Araguari River (Rio Araguary), which can be found on this map just north of the mouth of the Amazon River. This region existed as part of Pará until 1943, when it became the separate federal territory of Amapá; it gained statehood in 1990.

Pará and its ongoing struggle for power

Following Brazilian independence in 1822, the region underwent decades of turmoil. Not all the Brazilian states agreed with the declaration of independence, and Pará was one of those that initially refused to acknowledge the new Brazilian state. However, a year later, in 1823, Pará yielded to Brazilian forces and joined independent Brazil.

Despite joining the new country, political infighting continued. A large majority of the population was made up of indigenous people and other people of color, many of whom lived in poverty, while the reins of power were held by a rich, white minority. The popular revolt of Cabanagem in 1835 expressed the working class (cabanos) discontent and hostility towards this white elite. The cabanos rebelled against the Regent Government in the capital city of Belem. They initially overthrew the government there and executed the governor, but eventually their efforts were repressed and defeated.

Later in the nineteenth century and into the twentieth century, Pará’s economy grew through the production of rubber. At the time of this map’s printing, Pará was at the height of its rubber production, all of which was shipped through Belem. Other products included hardwoods, gold and jewels, and various plants used for dyes and fibers. In addition, other products from northern Brazil, Bolivia, Peru, and Venezuela were often shipped down the Amazon River and through Belem, making it a prominent trade city at this time.

This map is very rare, and another example of it could not be located in any reference work or otherwise. It was printed when political boundaries were in flux, when the state contained both a modern capital trade city and swathes of completely unexplored territory, a dichotomy that gives the reader a fascinating window into northern Brazil at this specific historical moment.