1854. Parade of the Scots Fusileer Guards at Buckingham Palace, (before her Majesty the Queen, & His Royal Highness, The Prince) on the Morning of their departure for the Seat of War, March 2nd, 1854

Parade of the Scots Fusileer Guards at Buckingham Palace, (before her Majesty the Queen, & His Royal Highness, The Prince) on the Morning of their departure for the Seat of War, March 2nd, 1854 information: 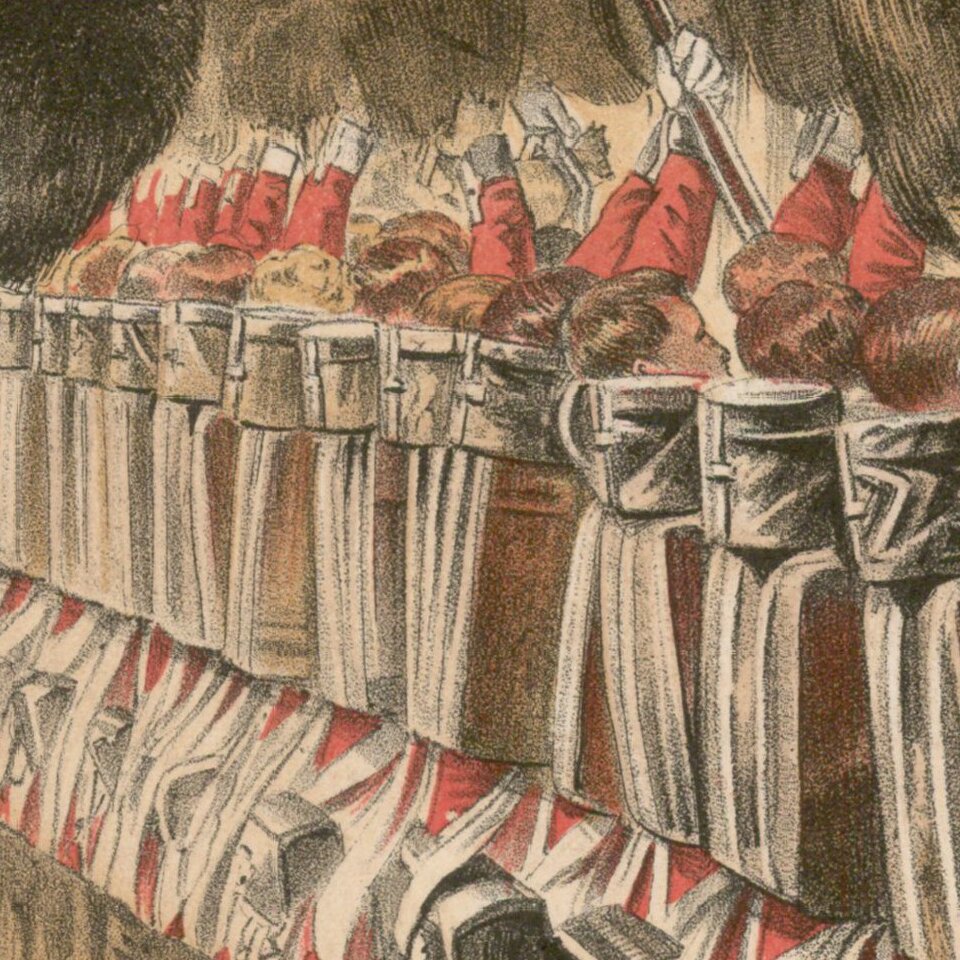 Decorative view of the parade of the Scots Fusileer Guards, prior to their departure for the Crimean War.

First established in 1805, the Scots Fusileer Guards were deployed in the Napoleonic Wars and later in the Crimean War.

In 1854, the Crimean War began, which pitted the United Kingdom, France and the Ottoman Empire against the Russian Empire. The 1st Battalion of the Scots Guards Fusiliers were dispatched as part of the Guards Brigade to the East, being deployed to Malta, Bulgaria and Turkey, before, in September, the British finally landed in the Crimea, at a place called Calamity Bay. The British and their French allies then began the advance on Sevastopol, a Russian naval base, but was blocked at the River Alma by Russian forces. And here came the Battalion's first engagement at the Battle of Alma, an action that saw chaotic and heavy hand-to-hand combat between the British and Russians. The road to Sevastopol runs through a gap between two hills, one to the east, known as Kourgane Hill and the other to the west, known as Telegraph Hill. On Kourgane Hill there consisted two earthworks, one known as the 'Great Redoubt' on the western side of the hill, while the other was on the eastern side, known as the 'Lesser Redoubt'.

A British unit, known as the Light Division, made their advance, making steady progress on the Great Redoubt, and took it with very heavy casualties, however chaos soon set in, after, during a Russian counter-attack, a confusing order from an unknown officer was soon contradicted by other officers, and the British duly fell back. The Scots Fusilier Guards, in the center of the Guards Brigade, part of the 1st Division, were supporting the Light Division, though had only just crossed the River Alma by the time the Great Redoubt was taken. One brave group of Royal Welch Fusiliers had held their ground and were firing into the Russians until confronted by a mass of Russian soldiers, forcing them to retreat rapidly, and in the process, smashed straight into the formation of the advancing Scots Fusiliers Guards, causing immense chaos. The Russians seized their opportunity to strike, launching a large-scale bayonet charge on the regiment, resulting in brutal carnage, eventually forcing the regiment to reluctantly withdraw, and suffering over 150 casualties. During this chaos, the Colour party of the regiment, whose Colours had been shot through, held their ground against the overwhelming Russian force, and safeguarded the Colours from the Russians, as well as helping to rally the regiment. The Russians attempted to exploit the chaos when a large Russian force advanced on the Brigade of Guards, but the Guards poured a withering and accurate fire into the Russians, causing very heavy casualties. The British, including men of the battered Scots Fusilier Guards, subsequently advancing, causing the Russians to flee which allowed the British to re-take the Great Redoubt. Further heroics occurred on the right, with the Highland Brigade, just two lines deep, firing, while advancing, on the Russians who soon fled from the spirited Highland Brigade. The Battle had been bloody, with the British losing over 2,000 casualties while the Russians suffered 6,000. For their actions at Alma, the Scots Fusilier Guards won a battle honour and four men of the regiment would later win the Victoria Cross, an award created in 1856 to become the highest award for valour in the face of the enemy. These men were Captain Robert James Lindsay, Sergeants John Knox and James McKechnie, as well as Private William Reynolds.

In 1855, the regiment took part in another bloody engagement, at the Battle of Inkerman, at a place known to the British as Mount Inkerman. The British, and their French allies, were attacked by numerically superior Russian troops, hoping to break the Siege of Sevastopol. The attack happened in very thick mist and despite having weak defences and being outnumbered severely, the British defended stoutly against the Russians. The first Russian attacks was completely devastated by the accurate fire of the badly outnumbered British defenders. The Guards helped defend the right of the British defenders, and at Sandbag Battery, performed valiantly in the face of overwhelming Russian numbers, and despite the difficulties the Guards faced, they overcame them and devastated the Russian forces assaulting the Sandbag Battery. The Battle of Inkerman was a victory that had been filled with dreadfully brutal hand-to-hand combat, that, at times, resembled the battles of a far more primitive age, and saw over 2,000 British soldiers killed or wounded out of over 8,000 that took part in the battle, with the Russians suffering over 11,000 casualties. The regiment won its thirteenth battle honour for their part at Inkerman.