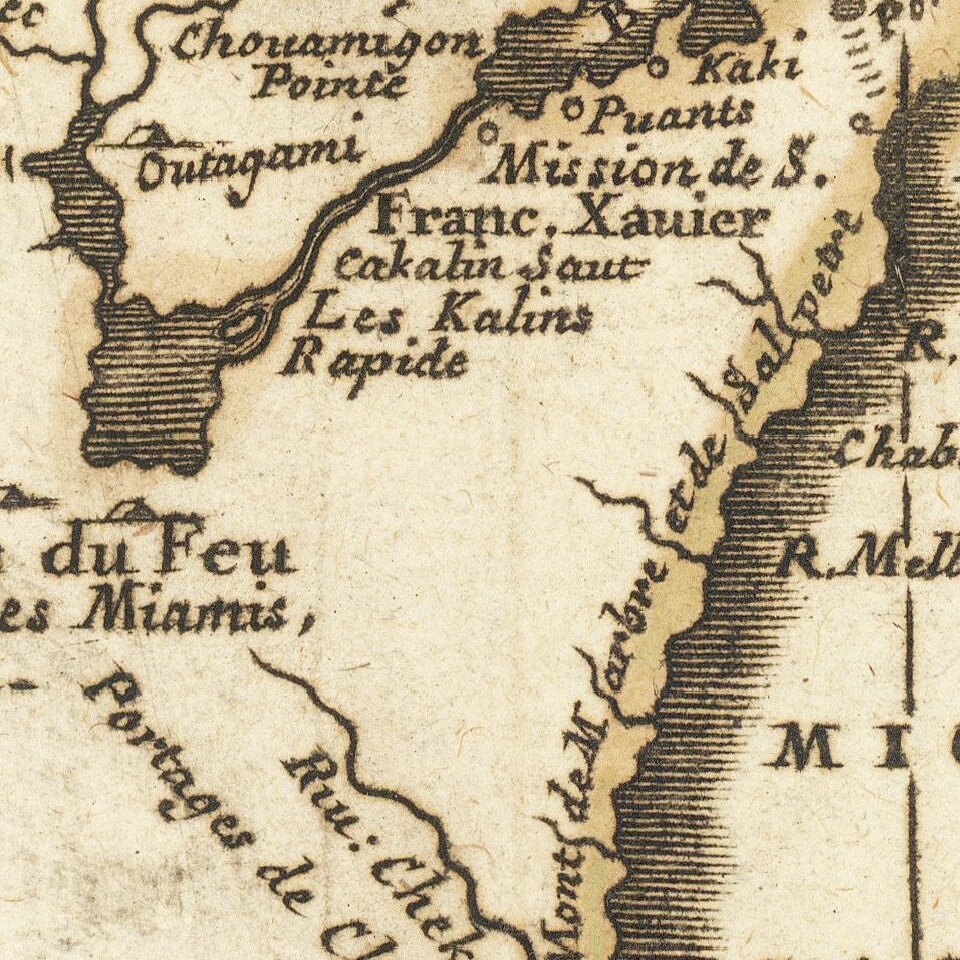 Nice example of Jean-Baptiste Nolin's landmark map of the Midwest, presenting for the first time on a printed map the evidence of the robust and multi-faceted exploration of the region by the French in the second half of the 18th Century.

Published in collaboration with Venetian mapmaker Vincenzo Coronelli, this highly important regional map of the Great Lakes and Upper Mississippi incorporates the reports of Marquette, Jolliet, Hennepin, La Salle and Allouez for the first time on a printed map. Nolin's map is the first printed map to focus on the Great Lakes and Upper Mississippi Region and almost certainly pre-dates Coronelli's 2-sheet map of North America. The map is derived from reports by Jean Baptiste-Louis Franquelin, who was responsible for collecting and transmitting information from other French Missionaries "exploring" North America for the French Government, and is filled with historical notes reflecting the meticulous process employed by its maker, testimony to its "remaining faithful to the observations of explorers . . . [its coverage of] the Great Lakes and the Mississippi River . . . would not be surpassed for more than a decade. (Coolie Verner).

Quebec native Louis Jolliet was sent in 1673 to explore the region west of the Great Lakes and extend the reach of French fur trading interests. Accompanied by Jesuit Father Jacques Marquette, he travelled to Fort Michilimackinac and then to the Green Bay, Wisconsin area. Proceeding west, they reached the Upper Mississippi River on Jun 17, 1673, then proceeded south to the Arkansas River, locating the confluence of the Mississippi with the Ohio River, Missouri River and Illinois River, where Marquette would attempt to set up a mission.

The map also draws on the experience of Louis Hennepin, who accompanied La Salle to the Great Lakes in 1678 and Fort Crevecouer on the Illinois River in 1679. In 1680, Hennepin led an expedition down the Illinois River to the Mississippi River, then up the Mississippi, until his capture by Sioux Indians. Returning to France in 1681, Hennepin published one of the most important travel narratives of the period describing his experiences with flair and exaggeration, which led Nolin and Coronelli to incorporate some of Hennepin's more fanciful observations, such as Niagara Falls being 500 feet high.

The whole bears a myriad of legends referring to points of interest and events. Lake Frontenac (Ontario) is named after the contemporaneous Governor of New France. Identified near Niagara Falls is Fort Conty, built by La Salle in 1679. The north shore of Lake Erie indicates the three peninsulas for the first time in print. LAGO ILINOIS, o MICHIGAMI is the first appearance of the Melchisedech Thevenot map of 1681.

At its southern point is Chekagou o Portage, the first mention of this name [Chicago] on a printed map. Lake Superior is clearly derived from the account of Father Claude Dablon. Lac Nadovessans to its north-west derives from the account written by Louis Hennepin and published in 1683 of his travels with La Salle up the Mississippi in 1679-80. Two further forts built by La Salle are identified. Fort des Miamis at the southern tip of Lake Michigan, which would later become Fort Saint-Joseph.

Fort Crevecoeur was constructed on the shores of Lake Peoria on the Illinois River. The river is given its alternative name of Seignelay after Jean-Baptiste Colbert, the Marquis of Seignelay, and the most formidable minister in France. Travelling north we pass the Misconsin River identified as the point at which in 1673 Marquette and Jolliet were the first Europeans to enter the Mississippi River. Further downriver the Missouri is labelled Riu. Des Ozages, and the Riviere Ouabache refers to the Ohio. Virtually the only error of judgement that can be labelled is the placing of a large mountain range along the western shore of the Mississippi, presumably a reference to the Rocky Mountains, about which the explorers had already heard.

The first edition of the map survives in only 1 known example (British Library -- undated). While other map experts have placed the date of the first edition of this map at ca. 1685, Burden opined that the first state was issued in about 1687, based upon its geographical content. Coronelli had completed his monumental 490 centimeter globes for King Louis XIV in 1683 and returned to Venice in 1685. He returned to Paris in 1686, at the time the engraving of the globe gores for the printed version of his globe was being commenced. The contract for publication of the gores between Nolin and Coronelli was signed in 1686. Nolin engraved 3 additional maps of North America between 1687 and 1689. Coronelli received the privilege for publication of the map on January 4, 1687, which he immediately transferred to Nolin.

The map is offered here in the third state. The first state is known in a single copy. The various states can be identified as follows:

A remarkable amalgam of French discovery in the New World, bringing together for the first time in graphic form the explorations and writings of these remarkable men whose missions among the Indians of North America and resultant discoveries opened up the midwest to European exploration and conquest over the next 100 years.

An essential map for collectors.