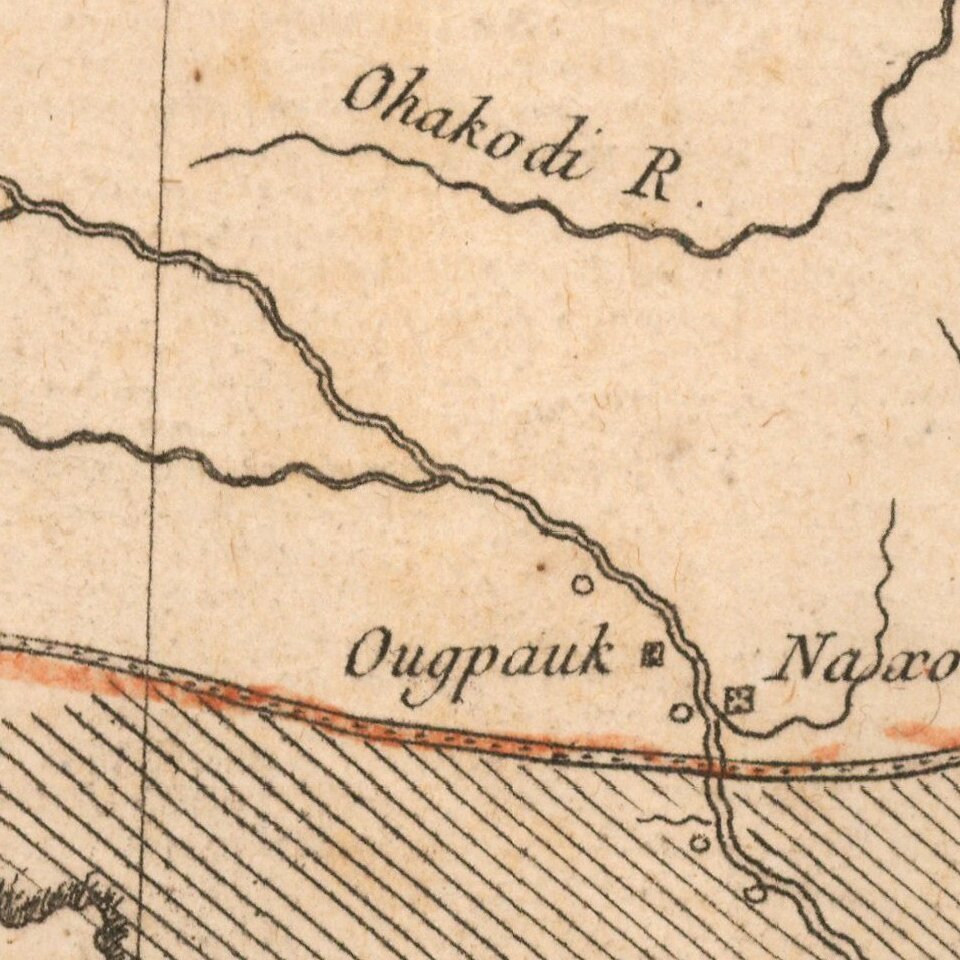 The French and British Historical Claims to Territory in the Canadian Maritimes and Maine, published in Paris on the eve of the Seven Years' War (1756-63).

This truly fascinating and historically important map details the Acadia Boundary Dispute between France and Britain, a major cause of the Seven Years' War. The bilingual map (in both French and German) focuses on the Canadian Maritimes, but extends eastwards to include Boston, Lake Champlain and Montreal.

The various dueling British and French current and historical claims to parts of the Canadian Maritimes (Acadia), Quebec and Maine, are shown to divide up the territory in various ways, employing lines and shading, as explained by keys. The basic geography of the map is taken from Thomas Jefferys's A New Map of Nova Scotia, and Cape Breton Island… (London, 1755), and a table toward the right of the composition compares various latitudinal and longitudinal readings on the present maps to 8 other well-known maps of the region. The composition is adorned with a beautiful allegorical scene of Neptune riding a sea chariot being led by hippocampus'.

In 1749, the Britain and France formed a Joint Commission to resolve their boundary dispute in Acadia. Tensions between the two powers remained high following the signing of the Treaty of Aix-la-Chapelle (1748), which ended the War of Austrian Succession (1740-8) on the terms of the status quo ante bellum. However, France and Britain disagreed about what the "status quo ante bellum" meant, as the boundaries of the French and British claims in the region from before this last war were prescribed by the Treaty of Utrecht (1713). The problem was that the relevant wording of that treaty was extremely vague. While both sides agreed that France had ceded at least a part of Acadia to Britain in 1713, they could not agree on the size and extent of the ceded territory. The original wording the Treaty of Utrecht read:

The most Christian king [Louis XIV of France] will entrust to [Anne] the Queen of Great Britain… Nova Scotia also, otherwise Acadia, in its entirety, conformable to its ancient limits; as also the town of Port Royal, now called Annapolis Royal, and generally all the dependencies of the said lands…

The British interpreted this to mean that France had ceded to them all of the Canadian Maritimes, Quebec's Gaspé Peninsula and a piece of the south shore of the St. Lawrence River. The French interpreted the same agreement to mean that they had only ceded the south coast of the Peninsula of Nova Scotia and the vicinity of the town of Port Royal (renamed Annapolis Royal by the British in 1713). Objective legal analysts have since interpreted the cession to actually consist of the entirely of Peninsular Nova Scotia but nothing else. As shown on the present map, both sides were very far apart.

As discussed by Mary Pedley in her fine article 'Map War', both sides on the Joint Commission employed a great assortment of historical maps and written records to prove the primacy of their respective claims. Both sides had strong historical precedents on their side. The British claimed that the region was discovered by John Cabot, an explorer sailing under the English flag in 1497 and that King James had formally chartered the territory to British subjects in 1621. The French countered that they had built the first permanent settlement in the region in 1603 (Port Royal), which was followed up by numerous French royal charters, settlements and fortifications, most notably the great bastion of Louisbourg on Cape Breton Island (built in 1720). The English then counterclaimed that this was all trumped by the Utrecht cessions and that British claims were now anchored by the large Royal Navy base at Halifax (founded in 1749).

The present map was issued by Georges-Louis La Rouge in a clever effort to graft the French claims onto Jefferys's geographical template, so adapting the British map to French ends.

The various historical claims are described on the map in both French and German and referring to the French key or "Explication" (in the upper left margin), as translated:

The boundaries proposed by the Memoranda of the English Commissioners dated September 21, 1750 and January 11, 1751"…Conveyed by a Red Dotted Line (This line defines Britain's brazenly ambitious claim as presented to the Joint Commission, which hold that all of the territory east and south of a line running along the south shore of the St. Lawrence River near Quebec and then running down directly southwards to the Gulf of Maine to a point just west of the Kennebec River, belongs to Britain).

The boundaries of Acadia and the adjacent sea banks as specified by the Treaty of Utrecht"…Conveyed by a Fine Dotted Line (This line defines the minimalistic and frankly inaccurate French interpretation of their cession to Britain during the treaty of Utrecht of 1713. In reality, France ceded all of Peninsular Nova Scotia to Britain, although here this cession shows that the French only ceded to the south coast of the peninsula).

The Limits of Nova Scotia following the Concession of James I to William [Alexander] in September 1621"…Conveyed by a Green Dotted Line (This line defines the limits of the massive grant that James I charted to the Scottish courtier William Alexander in 1621. Alexander named the grant 'Nova Scotia', so giving that name to the region for the first time. This grant included all of the Canadian Maritimes, being east of a line running from the St. Lawrence Estuary near Baie de Bic down to Passamaquoddy Bay).

The details defined in the 'Explication" (upper right margin), as translated:

The lands conceded by [Oliver] Cromwell to Messrs. La Tour, Crown and Temple on August 9, 1656…Conveyed by a Double Fine Dotted Line (The region in question is an ovoid area embracing the shores of the Bay of Fundy and a part of eastern Maine, as defined by a double fine line.

(This land claim relates to an extremely bizarre sequence of events. Charles de Saint-Étienne de la Tour (1593-1666), who served as the Governor of French Acadia (1631-42 and 1653-57), was deposed by the rival colonial leader, the Sieur de Charnizay, in 1645. He then switched sides to the English, whereupon he received, in conjunction with two English subjects, this grant from Oliver Cromwell, the Lord Protector of England. He subsequently returned to French allegiance, supposedly invalidating Cromwell's award).

The Government of Sieur Denis in 1654…Represented by Shading of Horizontal Line.

(The area includes the region granted to Charles de Menou d'Aulnay, the Sieur de Charnizay (1604-1650), in 1638 by Louis XIII. Aulnay acted as the de facto Governor of French Acadia after deposing La Tour).

(This area encompasses the original grant given to the abovementioned Governor Charles de la Tour by Louis XIII in 1638).

Not surprisingly, in spite of the detailed deliberations and unprecedented investigation of historical cartography, the Joint Commission was deadlocked and was disbanded in 1754. While the Ohio Valley Dispute is better known as a cause of the French & Indian or Seven Years' War, the Acadia Boundary Dispute was in some ways more important, as the region represented both the gateway to New France and guarded the sea routes from the British Thirteen colonies to Europe. Also, the banks off of Nova Scotia yielded a great wealth in fisheries, revenues infinitely more sizable than those received from the Ohio Country. The issue would have been top of mind in both London and Paris as the two empires headed for war in 1755, the year that this map was printed.

Georges-Louis La Rouge (1707-90) was one of the most important French cartographers of Seven Years' war and American Revolutionary War periods. He was born in Hanover, Germany, but moved to France in 1738. The present map was issued in bilingual form (both French and German), in an effort by La Rouge to access not only the French market, but clientele in his native region.

First published in French only, the present map was issued separately in German and French, although left over stock copies were included in La Rouge's Atlas Ameriquain Septentrional (1778). The map is an important artifact relating to both American and Canadian diplomatic history and is a key item for any serious collection of the mapping of the Canadian Maritimes and Maine.

The map is scarce and seldom appears on the market, this being the first example we have ever offered for sale. The last recorded example for sale listed on Americana Exchange appeared in a Francis Edwards catalogue in 1972. We previously offered an example of the map in 2013.