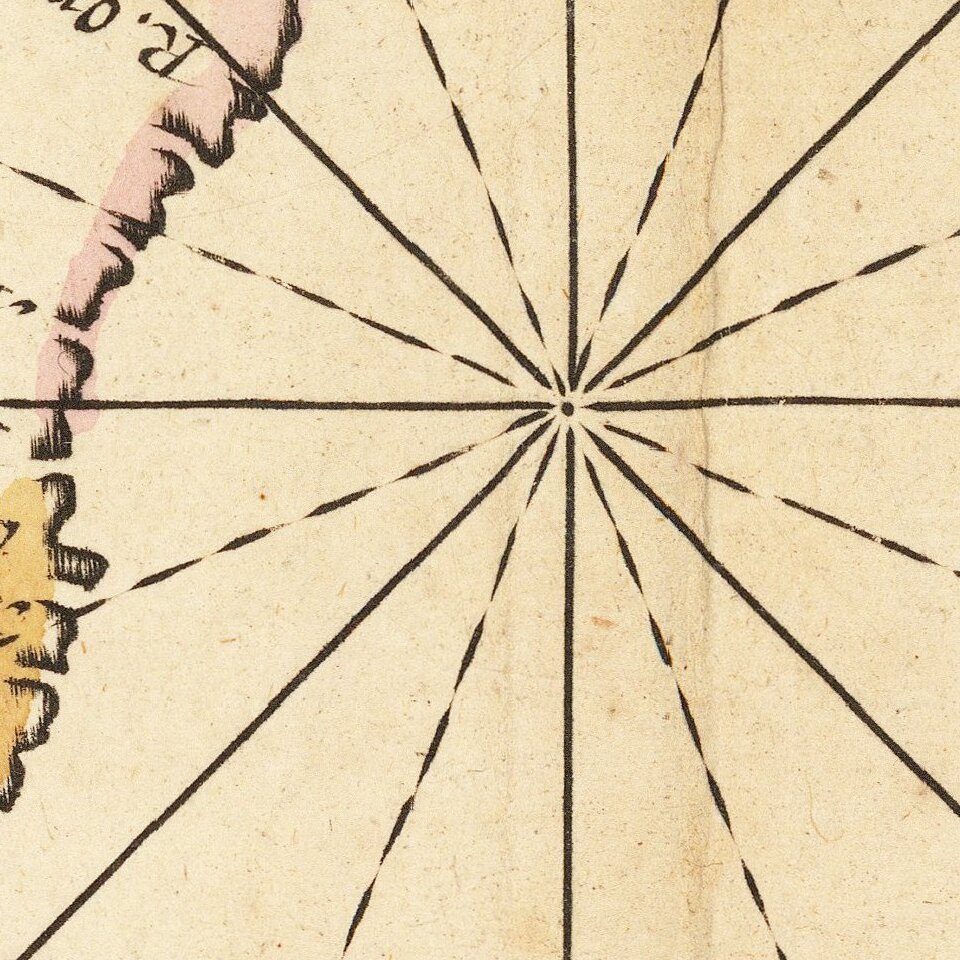 Scarce early sea chart by Doncker, showing the West Coast of the Pacific Ocean, which extends from the island of California to Chile, with noteworthy insets of New Zealand, the Ladrones, and part of Japan and Yedso.

The east-oriented chart follows the coastline closely, stopping south of La Serena in Chile. It is one of the earliest regional charts of the Pacific Coast of the Americas. This the second state of the map, which includes the Gulf Coast of Central America, unlike the first state. There are three insets nestled into inland North America and what would be the Caribbean, along with the title cartouche. These insets, outlined by delicate floral edges, show islands of interest to Europeans, although they were still seldom frequented by them when this chart was published.

The largest insert, in the center of the other two, shows a variety of tiny islands in the West Pacific, including the Ladrones (Marianas). These would be the first islands a navigator would meet when crossing the world’s largest ocean, making them a welcome and necessary stopover place en route to Asia. The Ladrones, or Thieves’ Islands, were so named by Magellan’s crew, who had a boat taken from them by the native Chamorros people. The crew attacked the Chamorros in return, exacting a higher price than that which had been taken.

The other inset shows the tip of Japan, along with three other islands, Yedso, Staten landt, and Compa[n]es Land. Also known as Yesso, is a feature included on many seventeenth and eighteenth-century maps. Historically, Ieso (Eso, Yeco, Jesso, Jeso, Yedso, Yesso) refers to the island of Hokkaido in northern Japan. It varies on maps from a small island to a near-continent sized mass that stretched from Asia to Alaska.

Nearby are two other hypothetical islands, Staten landt, and Compa[n]es Land. In the sixteenth century, Juan, the grandson of Vasco de Gama, was a Portuguese navigator who was accused of illegal trading with the Spanish in the East Indies. Gama fled and sailed from Macau to Japan in the later sixteenth century. He then struck out east, across the Pacific, and supposedly saw lands in the North Pacific.

Several voyagers sought out de Gama’s lands, including the Dutchmen Matthijs Hendrickszoon Quast in 1639 and Maarten Gerritszoon Vries in 1643. Compagnies Land, along with Staten Land, were islands sighted by Vries on his voyage. He named the island for the Dutch States General (Staten Land) and for the Dutch East India Company (VOC) (Compagnies, or Company’s Land). In reality, he had re-discovered two of the Kuril Islands. Here, Doncker has included both Staten Landt and Compag[n]es Land, separated from each other by the Straat de Vries, named for the navigator.

One of the most striking details of this chart is the island of California. From its first portrayal on a printed map by Diego Gutiérrez, in 1562, California was shown as part of North America by mapmakers, including Gerardus Mercator and Ortelius. In the 1620s, however, it began to appear as an island in several sources.

By the 1620s, many mapmakers chose to depict the peninsula as an island. These included Henricus Hondius, who published the first atlas map to focus solely on North America with the island prominently featured in 1636. Hondius borrowed his outline of California from another widely-distributed map, that of Henry Briggs and printed in Samuel Purchas’ Hakluytus Posthumus or Purchas his Pilgrimes (1625).

Other prominent practitioners like John Speed and Nicolas Sanson also adopted the new island and the practice became commonplace. Indeed, this map’s California is based on a Sanson map of 1656.

Father Eusebio Kino initially followed along with this theory, but after extensive travels in what is now California, Arizona, and northern Mexico, he concluded that the island was actually a peninsula. Even after Kino published a map based on his travels refuting the claim (Paris, 1705), California as an island remained a fixture until the mid-eighteenth century, as this map illustrates.

This fine chart illustrates a seldom seen world, as the Pacific was still seldom traversed by Europeans at this time. It is not often seen on the market.

Edward Brooke-Hitching, The Phantom Atlas: The Greatest Myths, Lies and Blunders on Maps (London: Simon and Schuster, 2016); Thomas Suarez, Early Mapping of the Pacific (Hong Kong: Periplus, 2004); Lawrence C. Wroth, “The Early Cartography of the Pacific,” The Papers of the Bibliographical Society of America 38, no. 2 (1944): 87-268; McLaughlin with Mayo, The Mapping of California as an Island: An Illustrated Checklist, map 21; Leighly California as an Island: An Illustrated Essay; Polk, The Island of California: A History of the Myth (Spokane: Arthur H. Clark Company, 1991); Wagner, 382; Leighly, 36; Lowery, 150; Sanderson, 61; Putman, 134-35; Goss, 35. KAP