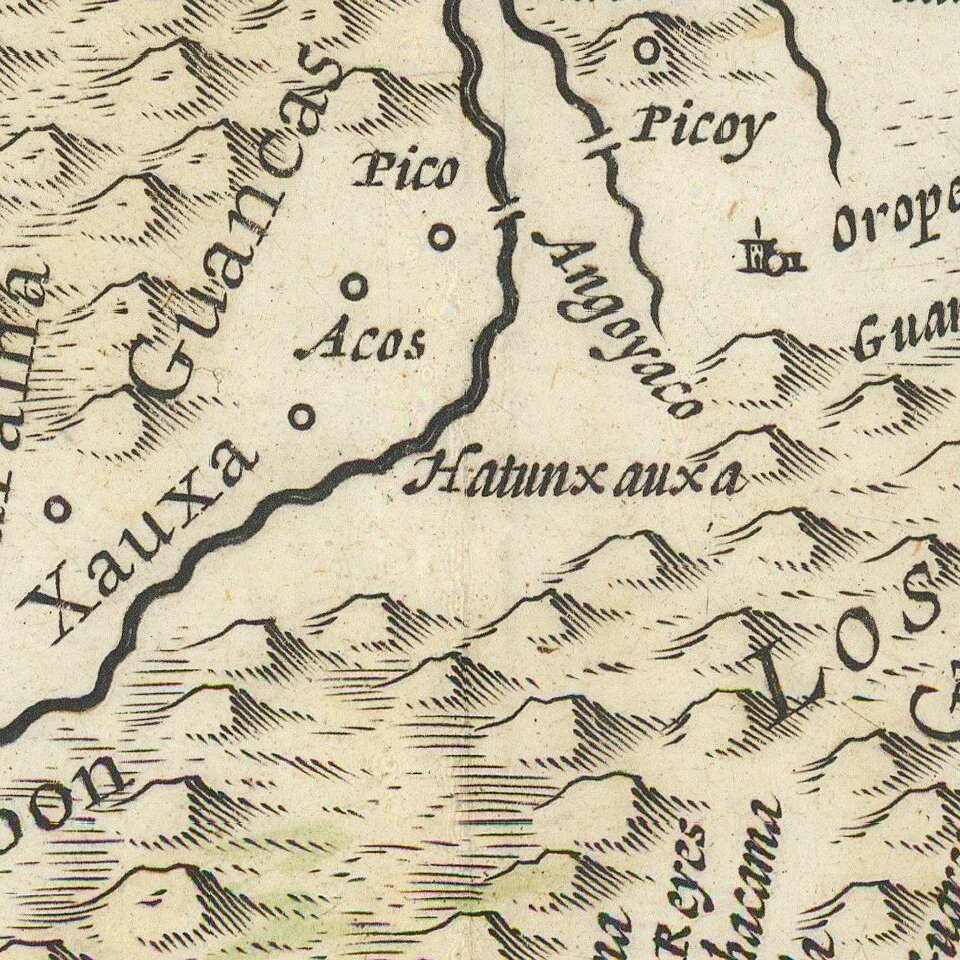 Striking, Early Map of Peru from the Dutch Golden Age

Fine old-color example of Blaeu's map of Peru, one of the best early decorative maps of the region. This is one of the two earliest atlas maps to focus on Peru, along with the map by Henricus Hondius.

Oriented with east at the top, the map includes nearly 100 place names. It is extensively detailed, including lakes, rivers, political boundaries, and, of course, the area’s famous mountainous terrain. The viceroyalty of Peru was then a much larger entity than the country of Peru today; the map shows portions of Ecuador and Chile, in addition to what is now Peru.

The map features several decorative elements, including a large cartouche in the upper left. The cartouche houses the simple title, as well as a double scale bar below. It is adorned with strapwork and garlands. A sizeable compass rose radiates rhumb lines out to sea, which is also patrolled by three sea monsters. Four ships in full sail also cruise the waters, a reference to the thriving trade that centered on Lima’s sea port, Callao.

This map featured in Willem Blaeu’s Atlas novus, one of two series of expanding atlases developed by the Blaeu publishing family. Blaeu first released his Theatrum Orbis Terrarum, sive, Atlas novus in 1635, achieving a career-long ambition of releasing a competitor to the Mercator-Hondius-Jansson atlas. After Willem’s death in 1638, his son Joan continued to add to the Atlas novus, until this was eclipsed by his monumental Atlas maior (1662-1672).

The Viceroyalty of Peru and the silver trade

Peru was initially settled by several indigenous civilizations before the Inca rose to prominence in the fifteenth century. A powerful empire, their capital was at Cusco, which is at the center of this map. In 1532, however, the Spanish overcame the Inca Emperor Atahualpa in the Battle of Cajamarca. Eventually, the Spanish conquered a large territory and consolidated it into the Viceroyalty of Peru, which included parts of present-day Ecuador, Bolivia, Venezuela, and Chile. The Spanish declared their capital at Lima, “The City of Kings”, which is why it is written as Lima Los Reyes on this map.

Peru was the most lucrative Spanish holding, and the richest of any imperial holding in the world, in the seventeenth-century because of one resource: silver. Lima was the center of a global trade that enriched many, but at the expense of hundreds of thousands of lives. The mining town at Potosi, to the south, or right, on this map, at 4,000 meters above sea level, was founded in 1546. Over the next two centuries, 40,000 tons of silver were shipped down the mountain and over the seas. The mining was done by indigenous people and imported slaves who suffered terrible diseases, accidents, and abuse; many perished. In 1672, Potosi became the site of the first mint in the Americas. With a population of at least 160,000, the city was the fourth largest in the world in the mid-seventeenth century, outstripping London, Milan, and Seville. At its peak, the city supported 22 dams which powered 140 mills for grinding the silver ore.

The Spanish invaded and conquered Cusco in 1533 and it became a regional center for trade, agriculture, mining, and ranching. Lima had been conquered a year earlier, in 1532, and named as the capital; it was also named the site of a Real Audiencia in 1543. The city became the major port of the Spanish Empire on the western South American coast and it was at its height when this map was made. La Paz, near Lake Titicaca and now the capital of Bolivia, was founded by Alonso de Mendoza in 1548 with the intention of serving as a principal town in the route from Potosi and another mining center, Oruro, to Lima near the Pacific.

From Lima, the silver would depart by ship for Portobello, Panama, where it would be packed overland and then shipped to Spain via the Caribbean and the Atlantic. Perhaps even more significant, yet less well known, was the huge proportion of the silver that instead was shipped to Acapulco and then across the Pacific to Manila, which was founded in 1571. From Manila, the silver would underwrite Spanish, and European, trading with China. The flow of silver sowed the seeds of a global capitalist system and marked the definitive beginning of the global economy we are still a part of today.

Dutch Golden Age and the Americas

The Dutch experienced what is referred to by historians as a Golden Age in the seventeenth century. The term can apply to the extraordinary volume and quality of Dutch art in this period, but also to the prominence of Dutch traders in international commerce and finance, as well as to the dominance of Dutch geographers and publishers, who led the European map and atlas trade throughout the century.

The Dutch participated in the European silver trade and profited from it. Although they were not allowed to trade with Peru directly—the Spanish kept a closed trading policy with their empire—they did engage in the global commerce links that were increasingly common by the mid-seventeenth century.

Although better known for their East India Company (VOC), which began trading in the East Indies at the turn of the seventeenth century, the Dutch were also involved in the Americas under the auspices of the Dutch West India Company and other companies. Their most famous settlement was at New Amsterdam, now New York.

However, the West India Company also had holdings in South America and the Caribbean, such as Curacao, St Martin, Dutch Brazil, and Dutch Guyana. When this map was first featured in the Blaeu atlas, in the 1630s, the Dutch were starting to challenge the Portuguese for holdings in South America. However, they lost their foothold in Brazil in 1654. This map was made at the height of Dutch interest in South America, including Peru, which sat in the middle of a global trade network in which the Dutch were powerful players. 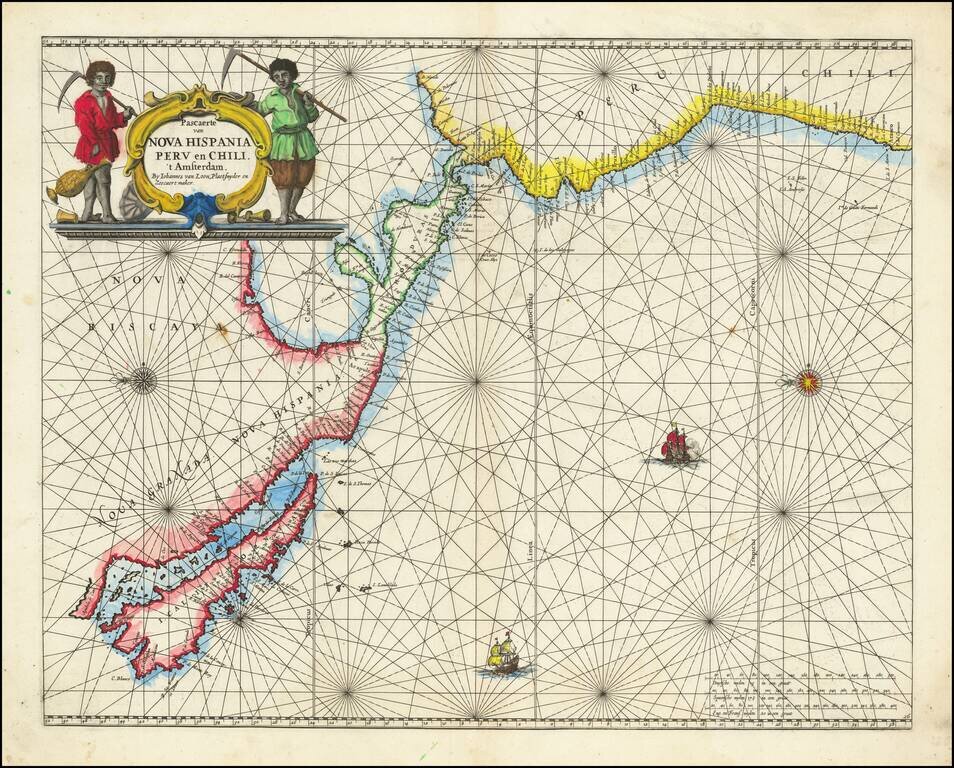 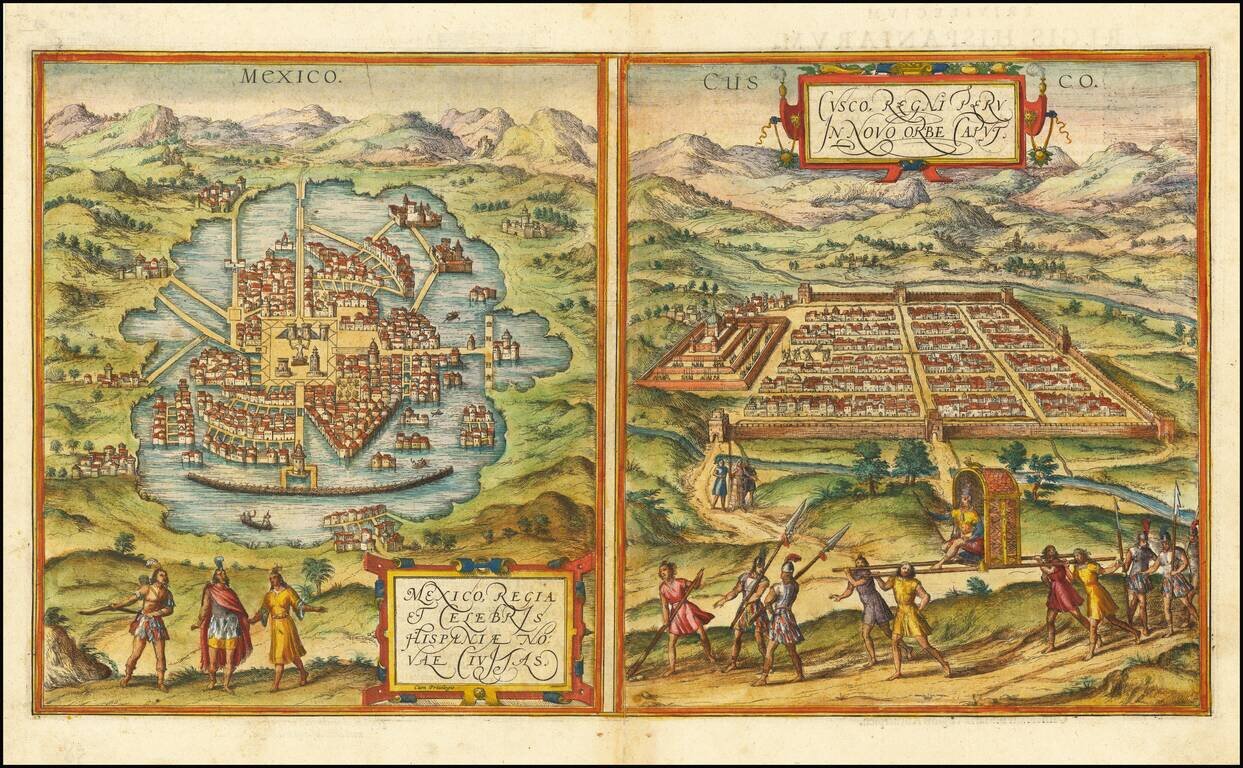