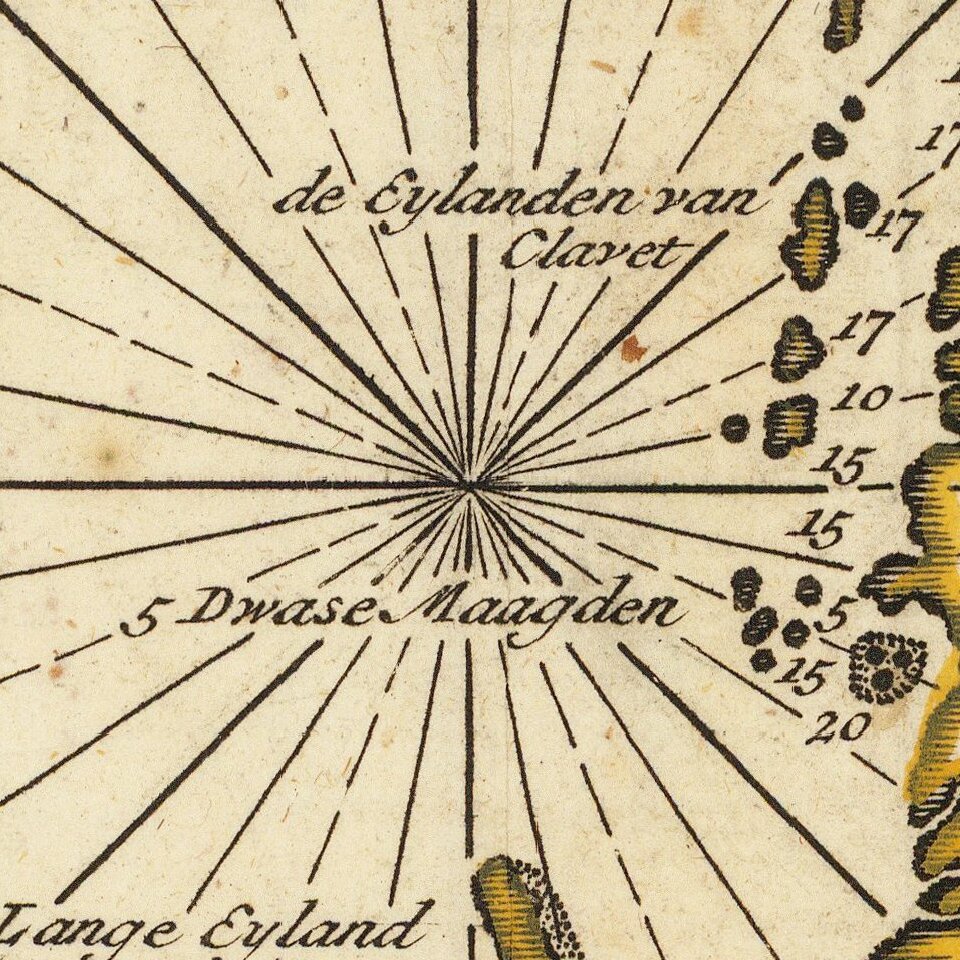 The Earliest Obtainable Large-Format Chart of the Philippines.

Rare chart of the Philippine Islands from Valentijn's important Oud en Nieuw Oost-Indien. A striking, large-format map, it is the earliest obtainable map of this size and detail to focus exclusively on the islands of the Philippines.

Oriented with east at the top, Valentijn's map encompasses Luzon and its associated islands to the immediate south. The chart is criss-crossed with rhumb lines, with one decorative compass rose in the waters north of the islands. Sounding depths are included near shore, as are sand banks, shoals, and obstructions. A scale is in the upper left corner. Port cities are also included.

Luzon is the main focus of this chart, an appropriate emphasis as it is the largest island in the Philippines archipelago and the most populous. It also contains one of the most important ports in the entire Pacific, Manila, which was part of a cross-oceanic trade route linking Acapulco in New Spain to Manila and the markets of Asia.

Luzon has always maintained strong trading and exchange ties with neighboring islands groups and mainland Asia. Magellan arrived in 1521 and nominally claimed the islands for Spain. However, the Spanish exercised no real control until 1565, when Miguel López de Legazpi began the first Spanish settlements near Cebu, here the island called “Celo.” The Spanish declared Manila the capital in 1571. When this chart was made, the islands were still under Spanish control, as they would be until 1898.

After spending sixteen years in the East Indies over the course of several voyages, Valentijn returned to his native Dordrecht. There, he finished his history of the East Indies, Oud en Nieuw Oost-Indien. The book was divided in five parts spread over eight volumes. It had over a thousand illustrations, including some of the most accurate maps of the region published to that date.

For the text, Valentijn borrowed heavily from contemporary works. To create such detailed maps and descriptions, Valentijn most likely also had access to the VOC’s archives. These archives were closely watched and very few scholars or officials gained entry, particularly if they were likely to publish the contents of the repository. Indeed, Valentijn was lucky to see his work published at all.

Today, Valentijn’s work is regarded as a veritable encyclopedia on maritime Asia. It is considered a useful collection of sources, from the eighteenth century and earlier, drawn from the VOC and personal papers. Some of his maps, particularly those of Australia, are drawn from manuscript sources now lost, making his history the lone surviving record of endangered knowledge.

This is a stirring chart showcasing Luzon, the cradle of trans-Pacific trade in the period this map was made. It would make a strong addition to any collection of Philippines maps.