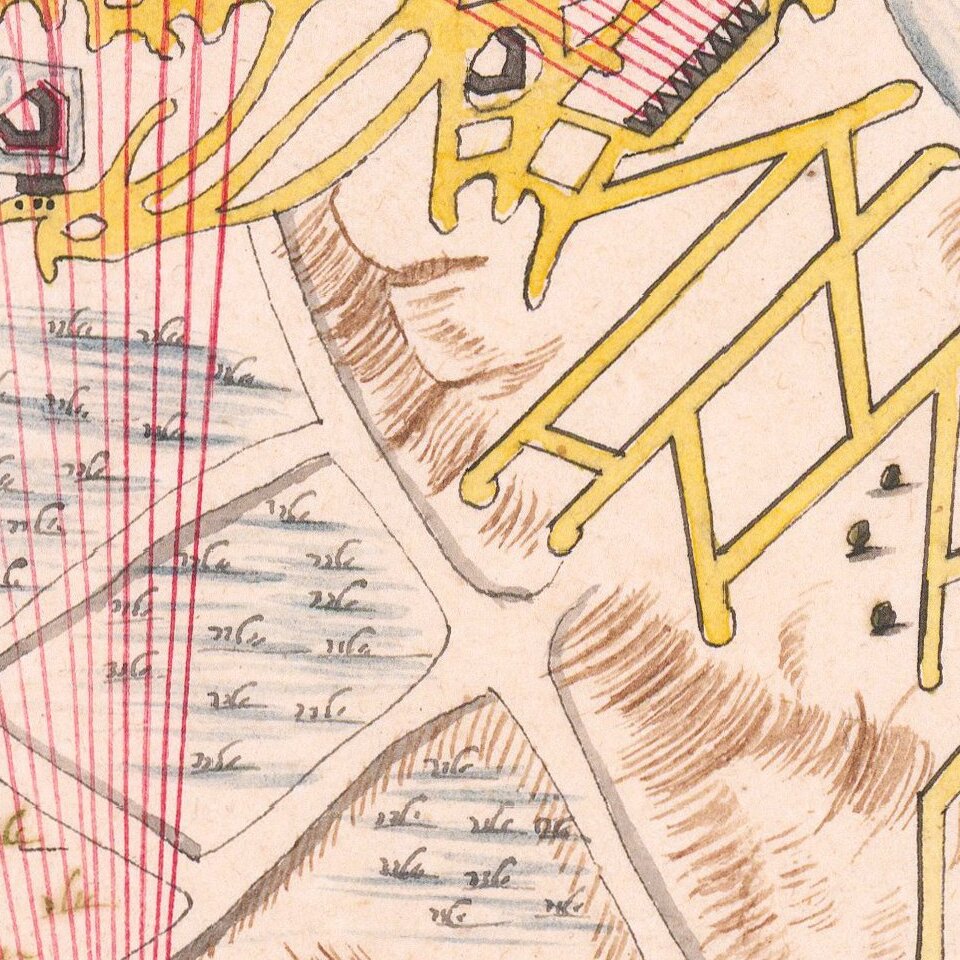 Finely executed battle plan, illustrating the Siege of Philippsburg in 1734.

The map and description at the right provide an excellent retrospective explanation of the Siege, inlcuding troop positions, firing lines, fortifications, etc.

The Siege of Philippsburg was conducted by French forces against forces in the fortress of Philippsburg in the Rhine River valley during the War of the Polish Succession. The Duke of Berwick led 100,000 men up the Rhine Valley in opposition to Austrian forces, of which 60,000 were detached to invest the fortress at Philippsburg. A relief column of 35,000 under the Prince Eugene of Savoy (accompanied by Crown Prince Frederick of Prussia) was unsuccessful in actually relieving the siege.

In late May 1734, the French began surrounding the fortress at Philippsburg. A total of 46 battalions were deployed, with 14 on the left bank of the Rhine, and the balance on the right bank, cutting the land approaches to the fortress. Of the troops on the right bank, half were dedicated to the siege, while the rest were detailed to defend the siege camp against any attempts to relieve the siege. On May 26 they began digging the outer trench surrounding the fortress.

The siege works progressed under Berwick until June 12, when he was felled by a lucky shot while examining siege works at a forward position. Command of the besieging army then came to d'Asfeld. On June 19, Eugene, under orders from the Kaiser, began moving his army, which had since grown to over 70,000 men, toward Philippsburg with the goal of relieving the siege. On June 27, the army reached Bruchsal. D'Asfeld responded by building additional boat-bridges over the Rhine to speed the movement of cavalry across the river, and redirected some of the siege personnel to face Eugene's threat. The French position was further deterred when heavy rains on July 5 caused portions of their position to be flooded. Despite these difficulties, Eugene failed to act decisively to capitalize on the situation, and withdrew his army.

By July 17, the French had penetrated the fortress' defenses to its inner moat, and were threatening the heart of the fortress. After failing to establish contact with Eugene, Wuttgenau and d'Asfeld agreed to terms of capitulation early on July 18.