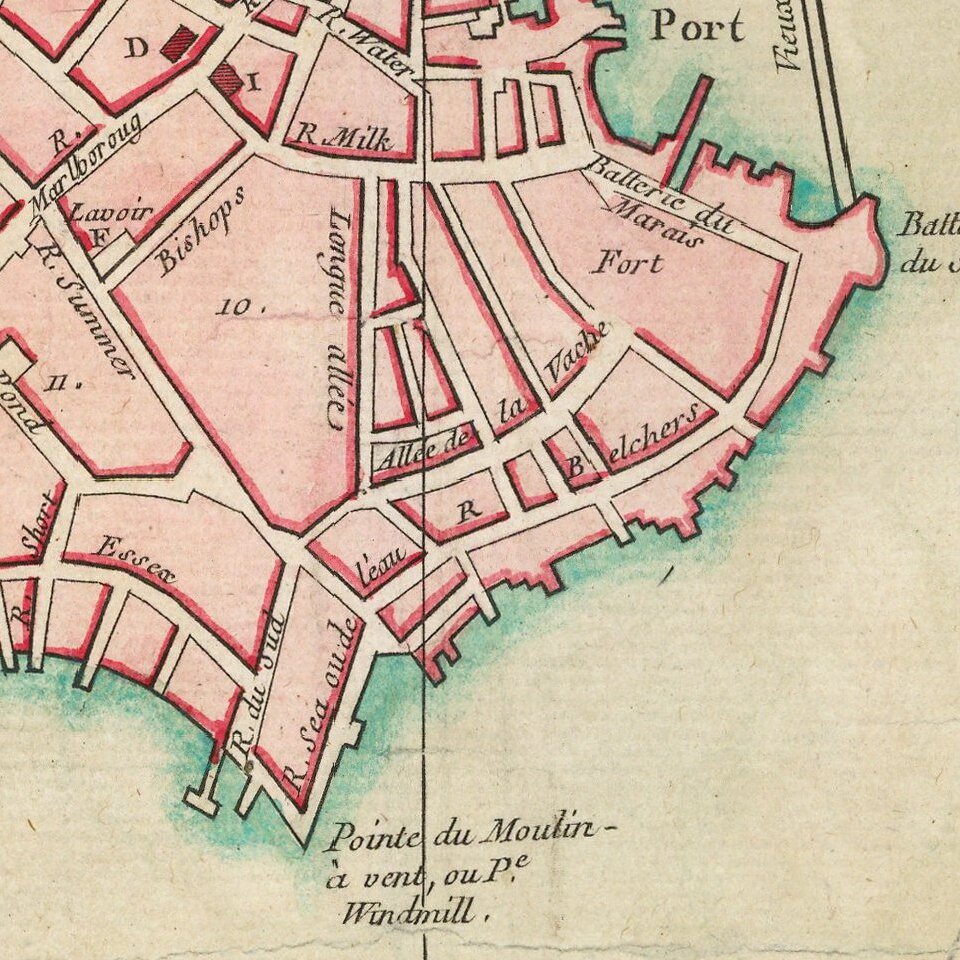 "This is the earliest detailed plan of the city of Boston published in France." (BPL) Featured on the Cover of Krieger and Cobb's Mapping Boston.

Rare French plan of Boston, showing Charlestown to the north, and Dorchester and Roxbury to the south. The map was probably published around the time of the Quartering Act of 1764, which is referenced in the title text. It is one of the best illustrations of the city before Revolution and shows many of the places associated with the lead up to that war. The map locates Faneuil Hall and many other colonial Boston landmarks. It illustrates the Boston Common and Beacon Hill.

This is the earliest detailed plan of the city of Boston published in France. Beautifully engraved and colored in the best style of French manuscript and printed maps, it shows streets, houses, public buildings, wharves, Beacon Hill, the Common, and other points of interest. Bellin, hydrographer to the King of France, published many fine maps of America under the auspices of the French Marine Office. This plan of Boston Harbor was probably copied from an English survey for use during the French and Indian War. The talent and skill of Jean Lattré, a French publisher and engraver, are displayed in this attractive map of the immediate environs of Boston. The city and harbor command a sparse but forceful appearance in which the clarity of the engraving is complemented by the richness of the full wash color. The city itself is carefully rendered, with each existing street shown, including King Street extending inward from the Long Wharf toward the State House and site of the Boston Massacre. It is particularly useful in illustrating the circumstances of the Massacre and the days that followed, for it includes within the Harbor an inset of the fortified island upon which Castle William stood - the location to which the British regiments retreated according to Hutchinson's report.

This is the first state of the map, without the engraved text box in the upper right, and not depicting the road into and fortifications around the Boston Neck and elsewhere.

The Quartering Act is a name given to a minimum of two Acts of British Parliament in the local governments of the American colonies to provide the British soldiers with any needed accommodations and housing. It also required colonists to provide food for any British soldiers in the area. Each of the Quartering Acts was an amendment to the Mutiny Act and required annual renewal by Parliament. They were originally intended as a response to issues that arose during the French and Indian War and soon became a source of tension between the inhabitants of the Thirteen Colonies and the government in London, England. These tensions would later fuel the fire that led to the American Revolution.

The Quartering Act of 1774 was known as one of the Coercive Acts in Great Britain, and as part of the Intolerable Acts in the colonies. This act applied to all colonies and stated that the British troops could live and eat in colonial homes without the owners' permission.

The map is particularly concerned with the military importance of Boston and the defenses of the city. The upper left corner of the map includes a list of the 12 neighborhoods of the city, each of which is said to maintain one company of infantry:

Rarity We can find only one other example having been on the market at Skinner Auctions in 2005, where it made $22,350.

Jacques-Nicolas Bellin (1703-1772) was among the most important mapmakers of the eighteenth century. In 1721, at age 18, he was appointed hydrographer (chief cartographer) to the French Navy. In August 1741, he became the first Ingénieur de la Marine of the Depot des cartes et plans de la Marine (the French Hydrographic Office) and was named Official Hydrographer of the French King.

During his term as Official Hydrographer, the Depot was the single most active center for the production of sea charts and maps, including a large folio format sea-chart of France, the Neptune Francois. He also produced a number of sea-atlases of the world, e.g., the Atlas Maritime and the Hydrographie Francaise. These gained fame, distinction, and respect all over Europe and were republished throughout the 18th and even in the succeeding century.

Bellin also came out with smaller format maps such as the 1764 Petit Atlas Maritime, containing 580 finely detailed charts. He also contributed many of the maps for Bellin and contributed a number of maps to the 15-volume Histoire Generale des Voyages of Antoine François Prévost or simply known l'Abbe Prevost.

Bellin set a very high standard of workmanship and accuracy, thus gaining for France a leading role in European cartography and geography. Many of his maps were copied by other mapmakers of Europe.