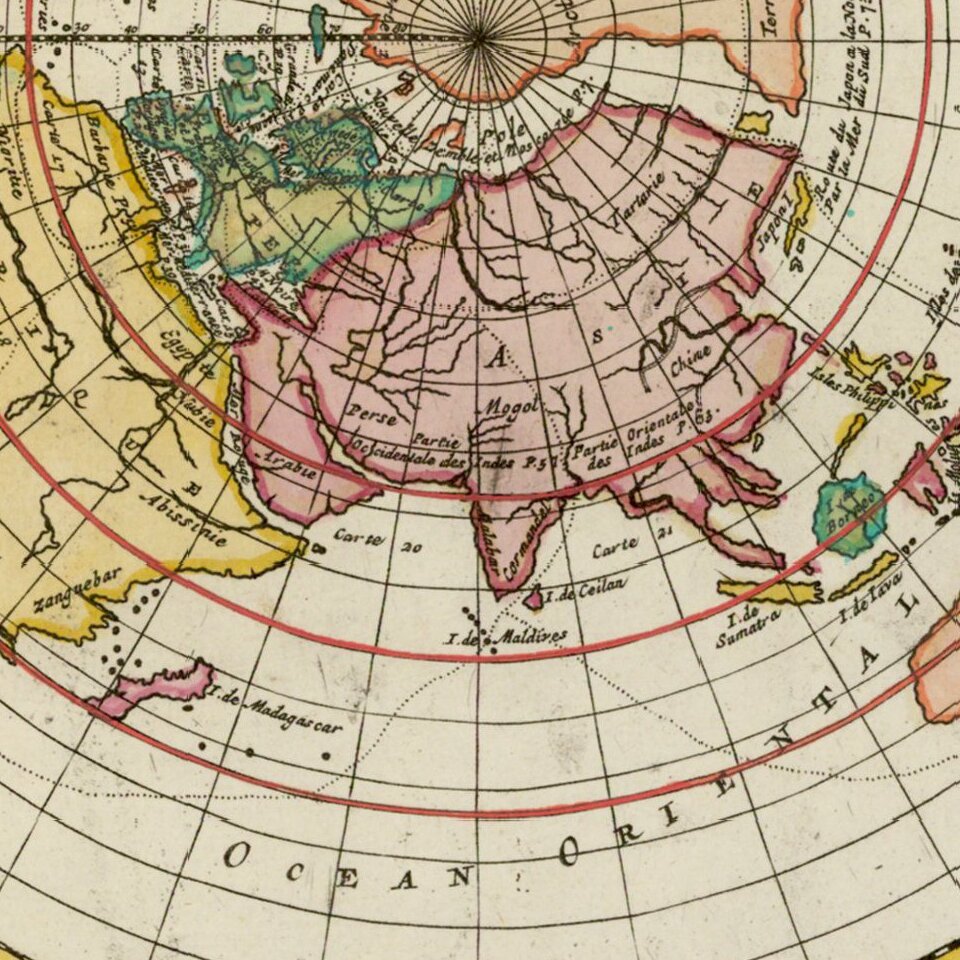 Fine example of this decorative map of the World on a Cassini projection, published by Jan Elwe.

Giovanni Domenico Cassini's monumental 24 foot diameter hand-drawn map of the world was originally drawn by Cassini on the floor of the Paris Observatory between 1679 and circa 1690. Cassini's work was the final chapter of the centuries old quest to map the world based upon astronomical observations, dating back to the ancient geographers of Greece and perhaps before. As noted by Alexander Vietor:

This rather self-evident observation [that the world could be measured and mapped based upon astronomical observations] was completely understood by the ancients who struggled with their limited technology to try to form from terrestrial and celestial data an accurate picture of the globe they inhabited. The closest to a modern calculation of the earth's size was achieved by the Greek philosopher Eratosthenes, who came within 14 percent of the correct circumference of the earth by measurements made in the Nile Valley and the relative angles of the sun's shadow at widely separated points along what was roughly the arc of a meridian. Knowledge of the size of the earth was likewise bound up with the voyages of exploration in the 15th Century and earlier. It was in part due to rejection by Columbus of Eratosthenes' figures for those of Poseidonius . . . which postulated a globe roughly one-quarter too small, that the discoverer tried to reach the Indies by sailing west. In this, Columbus was only following a belief that was held by Claudius Ptolemy . . .

Cassini's map is one of the landmark accomplishments in modern cartographic history and represents a milestone in the transformation of the mapmakers art into the modern era. In his fine article on the Cassini map, Alexander Vietor states:

The Cassini planisphere is assuredly one of the greatest cartographic landmarks connected with the furtherance of accurate map-making, and it is one of the first successful attempts to plot the shape of the earth from exact astronomical observations--and numerous observations, judging from the map. Thus the ultimate desire of the ancient classical geographers for astonomical accuracy for place locations was at last achieved, at least in part, through Cassini's efforts.

Cassini's map was constructed based upon observations of the eclipses of Jupiter and other celestial data compiled in 43 locations around the world by various correspondents of the French Academie Royale (including a young Edmund Halley), taken in places ranging from Quebec, Santiago, the Cape of Good Hope, Goa and Beijing. The map was constructed on the equidistant azimuthal projection developed by Mayerne-Turquet in 1648, as noted in Jewels in Her Crown: Treasures of Columbia University Libraries Special Collections:

This is the first map constructed using scientific data. Under Giovanni Domenico Cassini's direction, coordinates of latitude and longitude for points throughout the world were collected by the Académie Royale des Sciences for over thirty years. These were placed on the floor of the Paris Observatory, creating a planisphere that was 24 feet in diameter, with the North Pole at the center. Cassini's son Giovanni drew the much reduced version that was then engraved by Nolin.

Giovanni Domenico (also known as Jean-Dominique) Cassini, was born in Perinaldo, in the Comte of Nice, in 1625. He quickly rose in his studies to be awarded the Chair of Astronomy at the University of Bologna in 1650. Pope Alexander VII commissioned Cassini to study the navigation of the Po and Reno Rivers. One of Cassini's earliest astronomical masterworks was his calculation of the orbits of the moons of Jupiter, which resulted in the publication of his table of the eclipses of Jupiter's moons in 1668.

In 1669, Jean Baptiste Colbert recruited Cassini to come to Paris and join the French Royal Academy. Cassini became a naturalized citizen in 1673. While Cassini's main investigations were astronomical in nature, in 1679, King Louis XIV commissioned Cassini to construct a scientific map of France based upon astronomical observations, one of Cassini's other masterworks. In the same year, Cassini began laying out a World Map on a North Polar Projection based upon astronomical observations gathered from around the globe. A 24 foot diameter hemispheric projection was drawn in ink on the third floor of the Observatory of the Royal Academy outside of Paris. The map shows 43 places, from Quebec to Santiago, from Goa to Beijing, each marked with a star, with latitudes accurately measured using a method that relied upon observation of the moons of Jupiter.

By 1690, the ink drawing on the floor of the Observatory was fading, so at some time during the 1680s, it was transferred to paper and ultimately printed in a single sheet format for the first time by J.B. Nolin in 1696, placing a star in each or the 43 locations where astronomical observations were taken. A number of the most important mapmakers would copy this work, in the 18th Century.