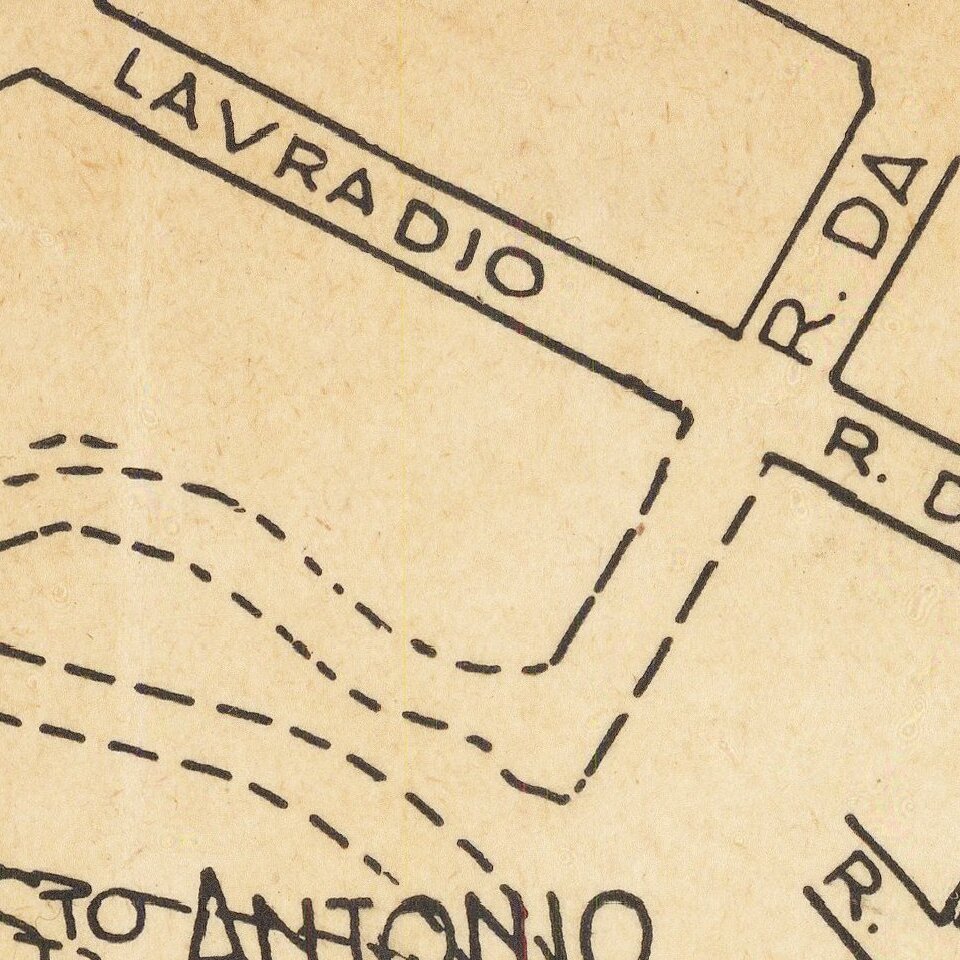 Rare, thorough and accessible plan of the city center of Rio de Janeiro, made to feature alongside the well-known Guia Briguiet travel guides.

From a golden age in Rio’s history, the map shows the central part of the metropolis in the early 1930s. The focus of the map is on the waterfront of the Guanabara Bay, including the location of the initial settlement of the Portuguese. The Morro do Castelo, or Castle Hill, was the elevated ground on which the Portuguese built their nascent town; the hill was demolished in 1920 to make way for the urban development seen here with dotted lines (on and just behind the peninsula).

This map, therefore, includes what is now known as the Castelo and Centro Districts, marked by orderly street blocks, as well as the industrial sector to the northwest and the residential area to the south. At this time the largest city in South America, Rio de Janeiro’s hilly terrain is clearly shown on this map. Red contour lines show the large hills rising from the coastal plain throughout the city. These include the Morro da Providência, site of the first favela.

The Europeanization of the city is evident with its grand boulevards, large squares, and many gardens and parks. This process developed from the time of the Portuguese monarchy’s rule from Rio, starting in 1808, and later under the Brazilian monarchy from 1822 and in Rio’s role as capital of a republican Brazil from 1889.

In Guanabara Bay is the Ihla das Cobras. This had been a fortress, prison, and an arsenal, but in 1932, a now, it was the major naval base of the Brazilian Navy. To the northwest is the railway line, serving both passenger stations and freight lines from the docks. Moving southeast are warehouses, followed by government buildings, the central banks and businesses, and the large market.

The map employs a stylistic north arrow and has a simple title cartouche in the lower right corner. The cartouche includes a note promising that this city plan was derived from the best-known sources, published and in manuscript, all the better to guide a tourist around this thriving city.

The plan was executed by Professor Arthur Duarte Ribeiro, who also served as the Minister of Traffic and Public Works in Rio and designed the Central Railway of Brazil. He made several other maps, including another map of Rio de Janeiro (1929) for the Briguiet Guides and a map of Brazil as part of the centennial celebrations of 1922.

This map was included as an accompaniment to a Briguiet Guide, a series of tourist guidebooks sponsored by F. Briguiet & Co. The company, an international bookseller specializing in foreign language books and specialty items, also published a few of their own works, mainly the travel guides like the one in which this map featured. They were in business from the nineteenth century to 1951 and their works are ephemeral, yet sought-after, collectors’ items today.

Although this map shows only the city’s center, it nevertheless also reveals the rich history of the settlement. The Portuguese landed on January 1, 1502, hence the name, possibly bestowed by Amerigo Vespucci, of “River or Bay of January.” The indigenous Guarani and Tupinambá peoples were already in the area at this time, but many of them were killed by European diseases, enslaved, or driven off by the colonizers.

In addition to the Portuguese, the French quickly took an interest in the bay as well. They created a settlement at the Ilha de Villegaignon, which is visible on this map. However, the Portuguese drove them off, named the city São Sebastião do Rio de Janeiro in 1565, and established their fortress on Castle Hill in 1567.

The town became known as a commercial hub, including as the major port for landing enslaved people from the Trans-Atlantic slave trade. As many of two million enslaved Africans—two-thirds of the total brought to Brazil, which had the most slave imports in the Americas—entered via Rio. They worked as domestic labor, dock workers, on sugar and coffee plantations, or in the mines of Minas Gerais. Slavery continued in Brazil longer than anywhere else; it was only abolished in 1888, on the steps of the palace at the Praça Quinze de Novembro, which can be seen on this map.

The colonial administration had called Rio its capital since 1763. In 1808, it became the imperial capital, as the Portuguese monarchy was driven from Europe by the Napoleonic Wars. The Royal Family stayed until 1822, developing many of the sites seen here, including the Bank of Brazil. In 1822, the Prince Regent, Dom Pedro, declared Brazil’s independence from the Campo de Santana Dom. It was later known as the Campo d’Acclamaçao and here is the Praça da Republica. The same site was where Brazil was declared a republic in 1889, hence the change of name.

As a young republic, Rio entered into a boom period that was still in full swing when this map was made. Financed by coffee, the city’s infrastructure swelled. For example, the ferry service to Niterói (here Nitheroy) began in 1862. In the early twentieth century, under Mayor Pereira Passos, the city continued to be developed, with the addition of large boulevards like the Mem de Sá and Av Central (later Rio Branco), both of which are prominently shown here.

Rio was not a golden city for everyone. As it grew, it also became a hub for the dispossessed and poor. One group of soldiers, promised land for their participation in a government campaign against a messianic movement, returned to Rio in the 1890s to find that the promise had not been kept. They began to occupy the Morro da Providência, which was covered in a plant called favela. The families living their dubbed the hillside the Morro da Favela and the name spread, becoming a commonplace for impoverished, improvised neighborhoods.

By the 1920s, and despite its inequality, Rio was becoming a major destination for tourists from abroad. It gained a near mythical status as a European-style city set in a tropical paradise. Visitors would need a guide, of course, which is where this helpful and informative map comes in.

The map appears to be extremely rare. We locate an example at the Biblioteca Nacional of Brazil, but there are no listed examples in OCLC.