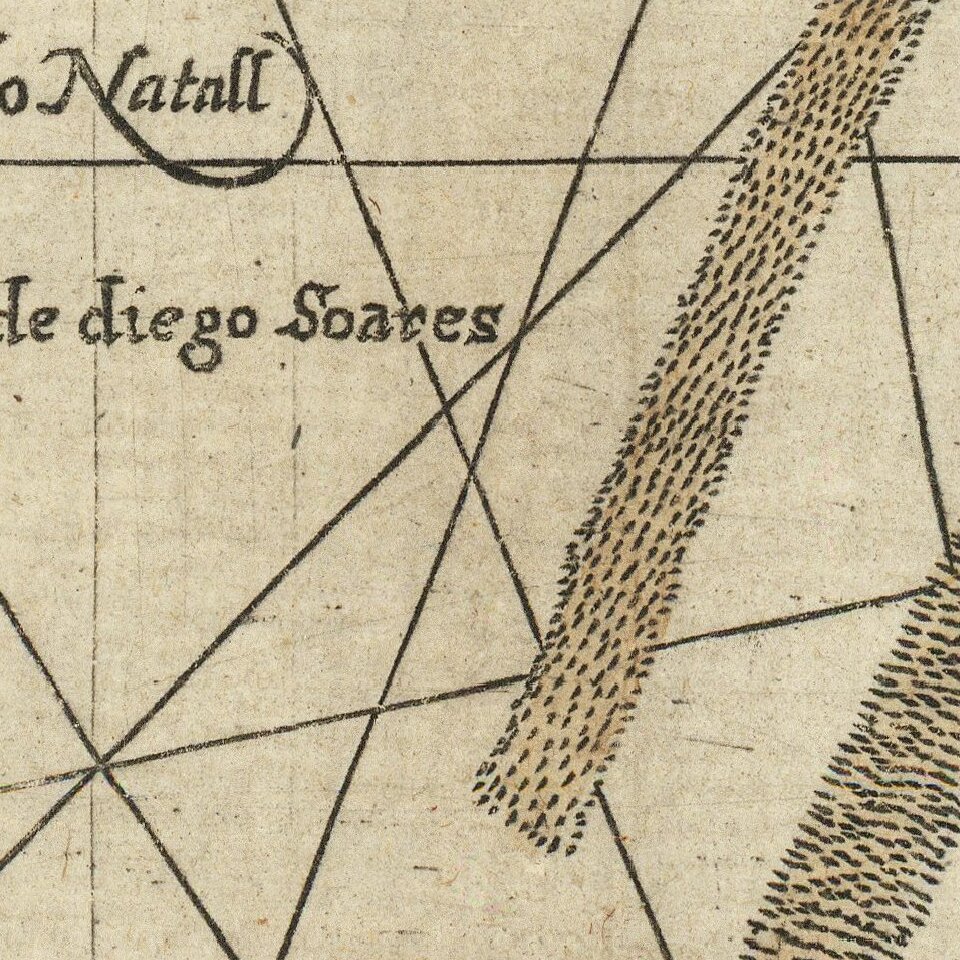 The map is filled with cartographic an iconographic details, including sailing ships and sea battles, sea monsters, animals within Africa, numerous compass roses and strap-work cartouche. The map shows the eastern side of Africa and part of the Indian Ocean (the bottom parts of present-day India and Ceylon appear in the upper right corner). The western Nile source lake of Zaflan is shown. Above this lake is a visual representation of the Kingdom of Prester John in Ethiopia. The cartouche on the right side contains the titles in Latin and in Dutch with a description of the territories which translates to English as follows: "Illustration of the coasts of the land called Terra do Natal, and likewise of all the coasts of Safala, Mozambique, Melinde, and the island of S. Lorenzo [Madagascar] ... likewise of the islands from Maldiva to the Island of Ceylon shown to the promontory of Cormorin, situated on the coast of India ... all very accurate, revised, and improved in accordance with the very best Indian maps."

The extensive details of coastal and other navigational points are likely based on portolan charts of the Portuguese, especially those by Bartolomeu Lasso. Linschoten was "one of the pathfinders for the first Dutch voyages to the East" (Schilder, p. 195). He was in the service of the Portuguese as Secretary to the Portuguese Archbishop of Goa in India from 1583 to 1589. Here, he had access to many Portuguese portolans as well as other valuable commercial information, especially as Goa at this time was the commercial and political center for the Portugal Empire in the East. Van Linschoten left Goa for home in January 1589. On the way to Portugal, his ship was pursued by an English fleet and lost its cargo in a storm while anchored off the Azores. After the loss of the cargo, Van Linschoten was persuaded to stay and help recover it; he spent two years on Tercera, working and preparing his notes from Goa.

Van Linschoten eventually arrived in Lisbon early in 1592, and then sailed home to The Netherlands. His account of his experiences is one of the most important travel works of the period.