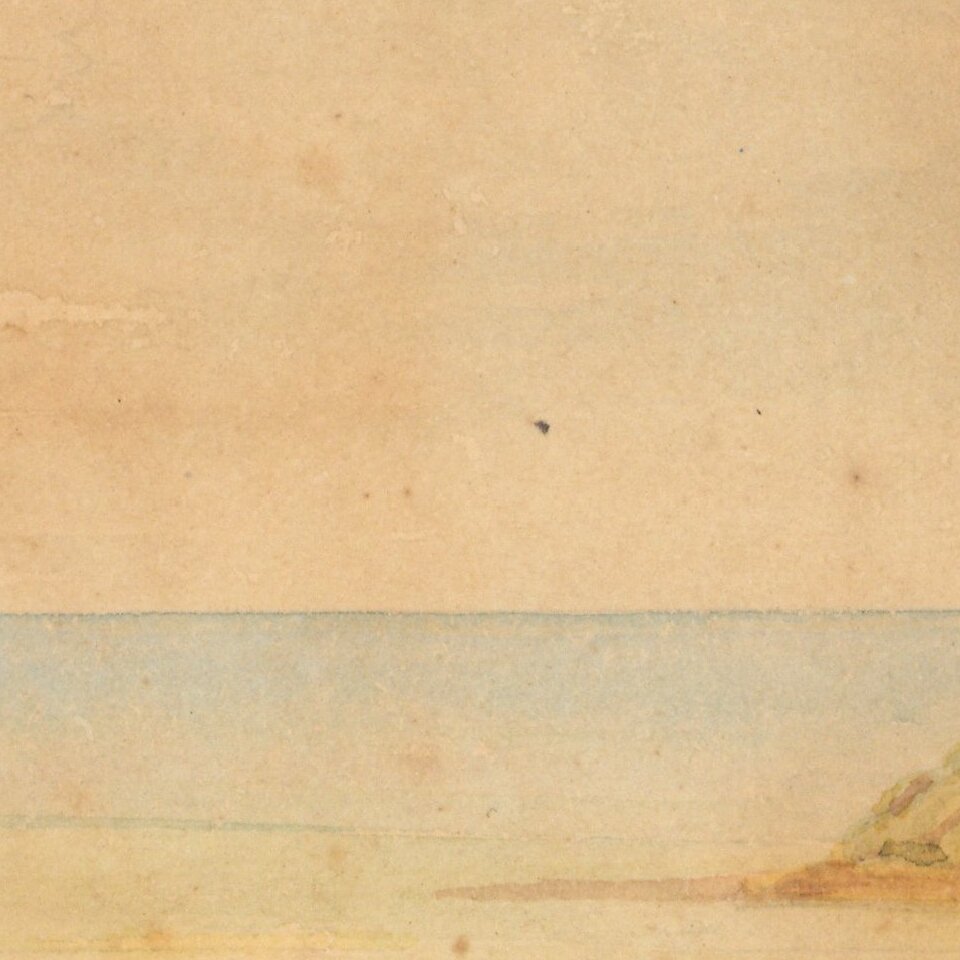 Fine view of Rio De Janeiro, painting attributed to William Smyth during one of his visits to Rio as an officer in the British Royal Navy.

Fine view of Rio from a high vista, looking southward towards Botafogo in the Guanabara Bay. On the right side of the image, the Morro Pan de Azúcar is prominently illustrated.

The view highlights the old and traditional neighborhoods of Rio de Janeiro, then home to the mansions of Rio's most important residents.

The painting is the work of the English artist Admiral William Smyth (1800-1877), who arrived in Rio de Janeiro for the second time in his life in July 1831, on the ship "Samarang". Smyth resided in Brazil for just under four years. His paintings survive in various private and public collections in Brazil, such as the "Coleção Geyer", which was donated to the Brazilian state a short time ago. Several of his watercolors were included by Gilberto Ferrez in Iconografía do Rio de Janeiro, 1530-1890.

Born in England, William Smyth joined the Royal Navy on April 9th, 1813. In 1825, he participated in the exploration expedition for the Behring Strait, under the command of Captain Frederick Beechey, on board the HMS Blossom. Upon the occasion, he was in Rio de Janeiro for the first time. On its way back, the ship spent the winter of 1826/1827 in São Francisco and Monterrey. In California, Smyth made drawings and watercolors of flowers and fauna at Carmel Mission, Monterrey Presidio. Also during the trip, Smyth was promoted to the rank of lieutenant, on May 8th,1827.

From June 1831, to the beginning of 1835, Smyth served under the command of Captain Charles Henry Paget on the HMS Samarang, residing in Brazil for almost four years, with various interruptions. The ship left the port of Spithead on July 26th, 1831, and arrived in Rio de Janeiro on September 22, 1831. They patrolled the Brazilian coast in search of slave ships, in addition to performing other missions for the British Crown.

Smyth did at least four crossings from Pernambuco to Montevideo, passing by Salvador and Rio de Janeiro, and then proceeding to the Pacific coast, sailing through Cape Horn and, from there, heading for Chile and Peru. In one of their trips, Smyth went as far as Panama, Acapulco and the Gulf of California. The details of this expedition, including the liaison with Charles Darwin, who was on board the Beagle, are found in the diary of Captain William McClintock Bunbury, HMS Saramang's executive officer, Smyth's friend and mate in adventures.

Upon returning, in June 1834, Smyth stopped in Callao, Peru, where Smyth went ashore and, together with an officer named Frederick Lowe, undertook a trip by land and boat, from Lima to Belém, described in the book Narrative of a Journey from Lima to Para, across the Andes and down the Amazon: undertaken with a view of ascertaining the practicability of a navigable communication with the Atlantic, by the rivers Pachitea, Ucayali, and Amazon, published in London by John Murray, in 1836. From Belém, Smyth returned to England on board the ship Creole on June 14th, 1835, disembarking in Falmouth on August 5. According to a report by Smyth himself, the trip from Lima to Belém took eight months and ten days. William captured several species of animals but almost all of them died on the way back.

In May, 1836, already in a new mission, Lieutenant William Smyth boarded HMS Terror, under the command of Captain George Back, for an expedition to the north of Hudson Bay (Canada), with plans to cross Melville's Peninsula overland and explore the other margin. The vessel remained icebound for ten months. As a pastime to compensate for the long inactivity, Smyth directed a night school for the seamen and organized the Royal Arctic Theater, an amateur theatrical activity. On its way to England, the vessel collided with an iceberg and was seriously damaged; it was barely able to reach the coast, as it was about to sink. Smyth made some lithographs, which illustrated the final report of this Arctic mission.

Smyth was promoted to Commander on November 14, 1837. Admitted as a member of the Royal Geographic Society, he attended its meetings until the end of his life. Smyth commanded the HMS Grecian from 1838 to 1843, stationed in Latin America and later at the Cape of Good Hope, being promoted to Captain on December 25, 1843.