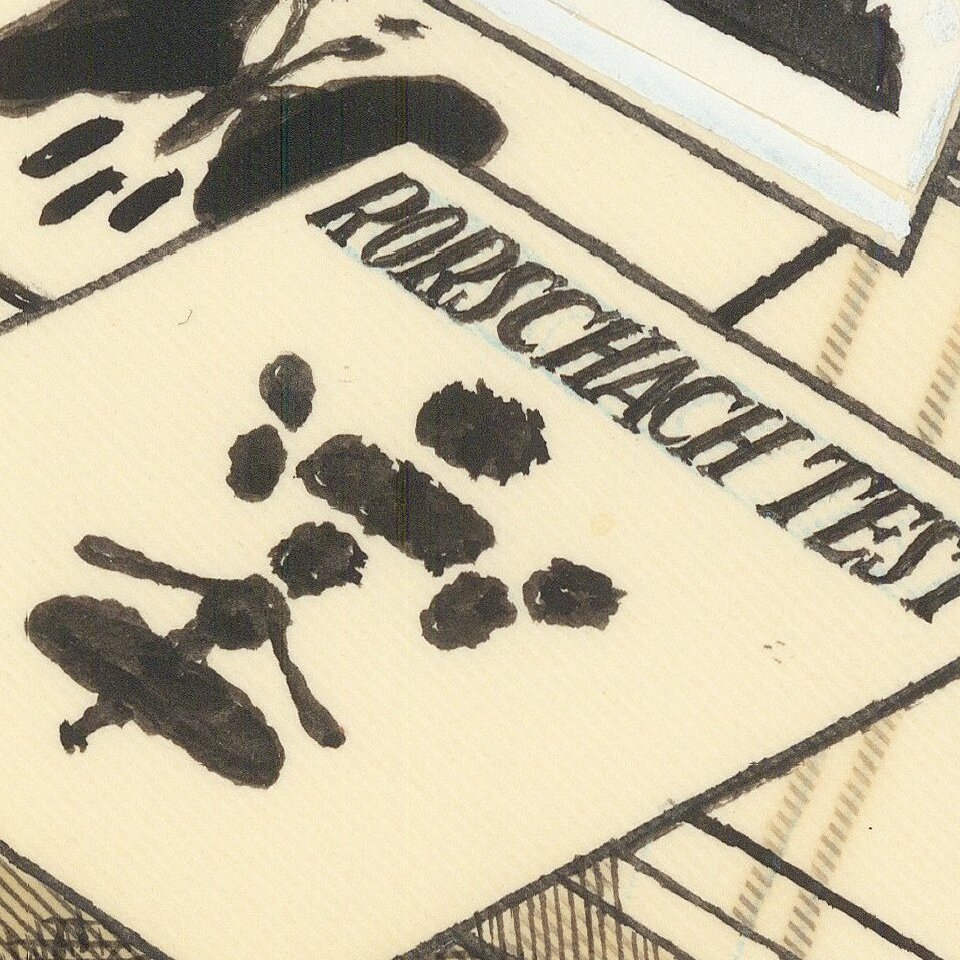 Original cartoon was drawn for the Richmond News Leader in 1983, showing Uncle Sam being shown various Rorchach ink pictures and identifying each image as Vietnam. Ink pictures shown and strewn along the floor include North America, the Middle East, Mexico & Central America, the United States, South America, Europe, a Hammer & Sickle, an various other shapes.

The artwork is inscribed to Todd Culbertson, who was the political Editor for the Richmond News Leader when Bob Gorrell worked there, and includes a note "For Todd With Best Wishes Always from Bob."

Bob Gorrell is one of the most important and well regarding political cartoonists of the past half century. For a more complete bio, see below.

The following is excerpted from the GorrellArt biography for Bob Gorrell

Born and raised in Greensboro, North Carolina, Bob Gorrell attended the University of Virginia as an Echols Scholar and graduated Phi Beta Kappa in 1977.

After two years as staff artist at the Ft. Myers News-Press in Florida, and three years in North Carolina at the Charlotte News, he went to work with the Richmond News Leader in Virginia during 1983. Gorrell moved to the Richmond Times-Dispatch in 1992 and served there as editorial cartoonist until resigning in January 1998 to concentrate on syndicated editorial and comics page features.

From November 2000 until August 2001, Gorrell served as Editor at iPipe, Inc., where he managed the distribution of feature content to major Internet portals and where he developed the editorial cartoon site Edivu, which was named a Best of the Web winner by U.S. News & World Report. From 2001 to 2003,

Gorrell was Editorial Cartoonist for America Online News, giving him one of the nation’s largest daily audiences through that portal’s 33 million subscribers. He continues to produce three to four editorial cartoons each week for distribution by Creators Syndicate, and he contributes uncredited writing to several popular comics page features.

Gorrell’s work has appeared through syndication in hundreds of daily and weekly newspapers, including The Atlanta Journal, The Portland Oregonian, The Providence Journal, USA Today, The New York Post, The Washington Times, The Wall Street Journal and The New York Times. His commentary has been featured in Time, Newsweek, National Review, and other prominent periodicals, and college papers have received his drawings through the U.S.I.C. Educational Foundation.

Gorrell cartoons have been used on CBS television’s Face the Nation and on C-Span, and he himself has guested on CNN’s Crossfire as well as other television and radio broadcasts.

His work has been included in numerous cartoon anthologies and is available along with cartoons by Gary Brookins in their jointly published Pen Pals.  During 1995, Gorrell compiled a solo collection of his cartoons for national distribution titled Affairs of State. Gorrell and Brookins collaborated on the comic strip Cobwebs from 1985 to 1986, and they co-produced the op-ed cartoon feature Muddle America from 1996 to 1998

Examples of his work are on deposit with museums of cartoon art at Ohio State University, and the majority of his archives are housed at Alderman Library at The University of Virginia.