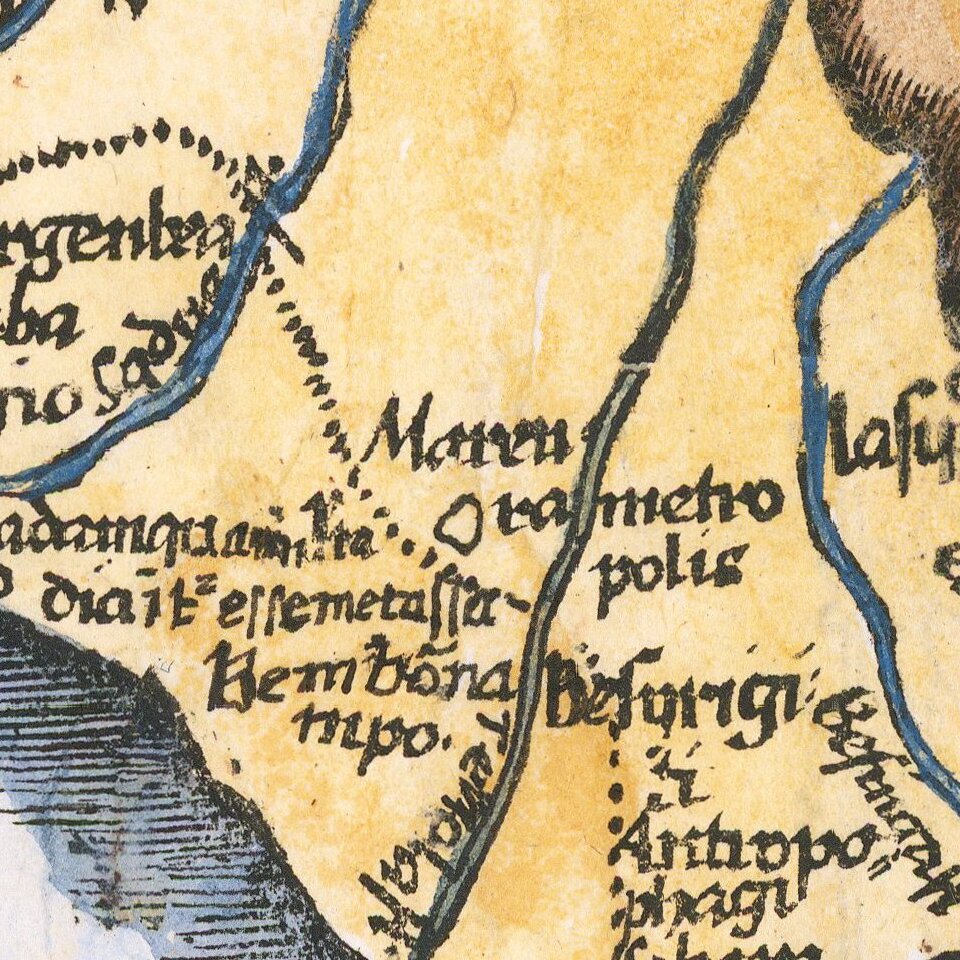 One of Ptolemy's Greatest Errors

An important early map of the Indian Ocean and Southeast Asia, drawn from Ptolemy's Geography.

The map illustrates one of the greatest of the Ptolemy errors, the belief that a southern continent existed, which counter-balanced the weight of the land-masses in the northern hemisphere, to keep the earth stable on its axis. The present map illustrates a portion of the landlocked Indian Ocean, including much of the Indian Ocean (Indicum Mare), as it had been mapped by Ptolemy. As noted by Suarez:

. . .After crossing east of the Ganges (whose Delta is on the left), we enter Aurea region, a kingdom of gold, which is roughly located where Burma begins today. Above it lies Cirradia, from where, Ptolemy tells us, comes the finest cinnamon. Further down the coast one comes to Argentea Regio, a kingdom of silver, "in which there is said to be much well-guarded metal." Besyngiti, which is also said to have much gold, is situated close by. The region's inhabitants are reported to be "white, short, with flat noses." Here the Temala River, because of its position and because it empties through a southerly elbow of land, appears to be the Irrawaddy. If so, the Sinus Sabaricus would be the Gulf of Martaban, whose eastern shores begin the Malay Peninsula, and the Sinus Permimulicus would be the Gulf of Siam.

That active commerce was conducted between Malaya and points west during the period in which the Geographia was compiled is suggested by the Geographia's reference to the Indian port of Alosygni (probably in the Dodvari Delta) as a "place of embarkation for those who sail for the Golden Chersonense." The Golden Chersonese is generally accepted to be Malaya, which Ptolemy considered and important place . . .

[The Golden Cheronesus] may in fact be Sumatra, portrayed here without the strait that separates it from Malaya. If this is so, it would explain both the shape of the Malay Peninsula and also its extension into the Southern Hemisphere. During the Renaissance, this observation led some scholars (including Abraham Ortelius) to argue that Malaya and Sumatra were once joined in some earlier geological age, rather than conclude that Ptolemy was simply unaware of the Malacca Strait. . . .

Many of the coastal cities in Ptolemy's Southeast Asia are marked as "emporiums." These include the ports of Baracura, Barabonna, and Bsyga, in the region of what would now be Burma. Further along the Malay Peninsula one comes to the Emporium of Tacola, with Sabana at the southernmost tip, in the position of modern day Singapore. Scholars have tried to identify these places, but there is no convincing consensus. The Sinus Perimulicus is probably the Gulf of Siam (if not the Sinus Magnus), with Regio Lestoru being lower Siam and Cambodia. A spine of mountains running north from there, in what is now northern Thailand and Burma, is according to Ptolemy, a "habitat of tigers and elephants," as well as "lions and robbers and wild men who live in caves, having skins like the Hippopotamus, who are able to hurl darts with ease."

In the waters west of the peninsula, in the relative position of the Nicobar Islands, we find Bazacata Insula, where there "are many shellfish, and the inhabitants of the island," who are called Agmatae, "are said at all times to go without clothing." In 673 A.D. the Chinese pilgrim I-Ching . . . reached what he called the "Kingdom of the Naked People," which has been identified as the Nicobars . . .

In the mid-sixteenth century, Gerard Mercator wrongly determined that Bazacatga was actually the Philippine island of Palawan. This was a logical conclusion for Mercator, because he mistakenly believed Taprobana to be Sumatra (rather than Ceylon). . . .

Lorenz (Laurent) Fries (ca. 1485-1532) was born in Mulhouse, Alsace. He studied medicine, apparently spending time at the universities of Pavia, Piacenza, Montpellier and Vienna. After completing his education, Fries worked as a physician in several places before settling in Strasbourg in about 1519. While in Strasbourg, Fries met the Strasbourg printer and publisher Johann Grüninger, an associate of the St. Dié group of scholars formed by, among others, Walter Lud, Matthias Ringmann and Martin Waldseemüller.

From 1520 to 1525, Fries worked with Grüninger as a cartographic editor, exploiting the corpus of material that Waldseemüller had created. Fries' first venture into mapmaking was in 1520, when he executed a reduction of Martin Waldseemüller's wall map of the world, first published in 1507. While it would appear that Fries was the editor of the map, credit is actually given in the title to Peter Apian. The map, Tipus Orbis Universalis Iuxta Ptolomei Cosmographi Traditionem Et Americ Vespucii Aliorque Lustrationes A Petro Apiano Leysnico Elucubrat. An.o Dni MDXX, was issued in Caius Julius Solinus' Enarrationes, edited by Camers, and published in Vienna in 1520.

The 1522 edition of Fries' work is very rare, suggesting that the work was not commercially successful. In 1525, an improved edition was issued, with a re-edit of the text by Willibald Pirkheimer, from the notes of Regiomontanus (Johannes Müller von Königsberg).

After Grüninger's death in ca. 1531, the business was continued by his son Christoph, who seems to have sold the materials for the Ptolemy to two Lyon publishers, the brothers Melchior and Gaspar Trechsel, who published a joint edition in 1535, before Gaspar Trechsel published an edition in his own right in 1541.