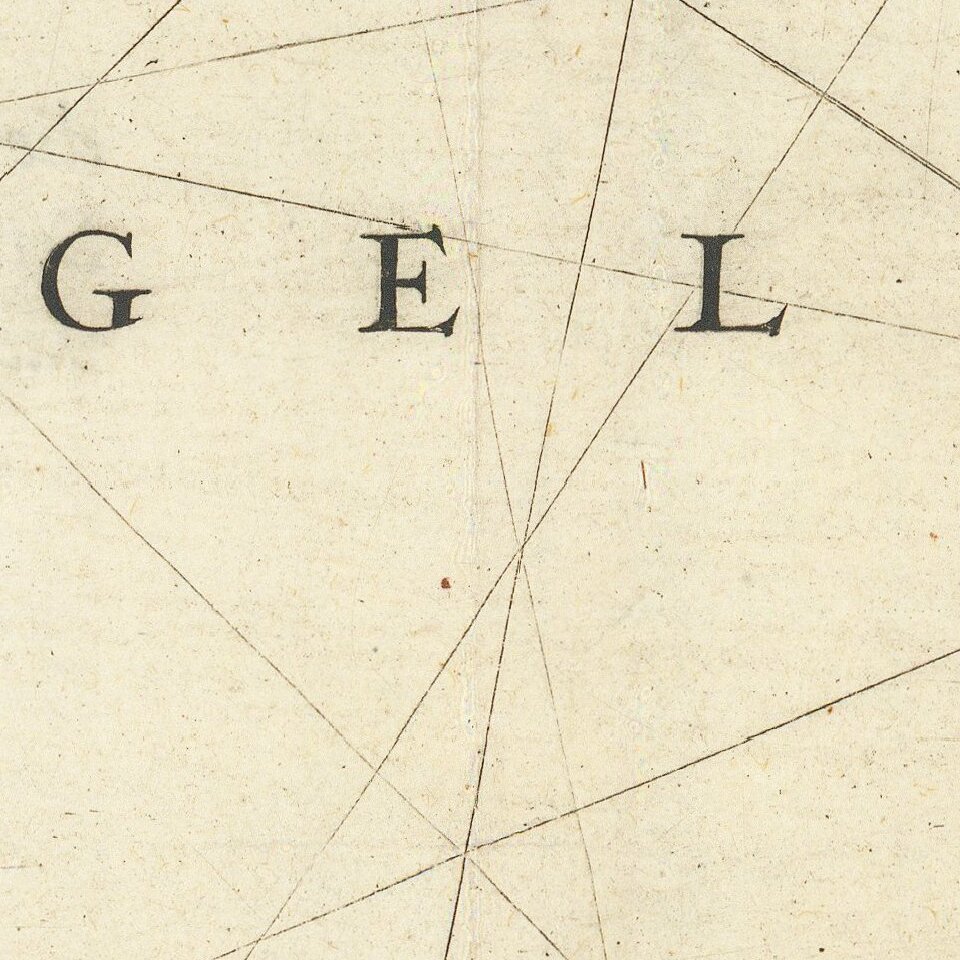 Fine example of Willem Janszoon Blaeu's map of the Straits of Magellan and Tierra del Fuego (Magellanica)—the gateway to the Pacific during the seventeenth and eighteenth centuries. This map was the basis for many other maps of Tierra del Fuego and has the characteristic shark-tooth peninsula jutting to the south.

The unusual peninsula to the south, resembling a sharply angled triangle, was the result of the unclear reports from the Le Maire and Schouten expedition, which was the first to round Cape Horn in their circumnavigation of 1615-1617. The navigators thought Cape Horn could be a true cape connected to Tierra del Fuego, not an island as it is, hence the extension of Tierra del Fuego to the south. Another notable geographic feature include the numerous mountains as sighted on shore from ships, which seldom if ever made landfall on the southern coast of Tierra del Fuego at this time.

This example includes three cartouches and a dedicatory text with a coat of arms. There are also three compass roses, rhumb lines, and a fleet of seven ships in full sail in the lower left corner. The title cartouche, in the middle of the top center, is decorated with ribbons and a decorative frame at the bottom. A scroll cartouche to the west of Tierra del Fuego, draped in blue fabric, lists toponyms too large to include in the Strait of Magellan, based on the voyages of Magellan, Drake, and Cavendish in the sixteenth century, among others.

The final cartouche is an innovative grid scale which explains why latitude lines stretch apart as they approach the poles in a Mercator projection. Blaeu was highly trained in hydrography, globemaking, and astronomy and hence was a skilled mathematician. This cartouche is evidence of his acumen.

To the right of the cartouche are three adult Patagonians and one Patagonian child. They are representations of the much-discussed Patagonian giants, naked except for capes. The myth of the Patagonian giants began with Magellan and the first European contact with the region and continued in the early seventeenth century. The legend would continue with discussions of evidence of giants by the Royal Society in the 1760s and was still popular well into the nineteenth century.

The dedicatory text names Constantijn Huygens, a Dutch poet and father of the scientist Christian Huygens. In addition to writing poetry in Latin, French, Dutch, and Spanish, Constantijn was a diplomat and served as secretary to the Court in Holland. He corresponded with savants like Descartes and was an integral part of the Dutch intellectual network of which Blaeu was also a part.

This map was influential, as was all of Blaeu’s work. The inclusion of Cape Horn as a peninsula in particular would be adopted by other mapmakers including Jans Janssonius, John Ogilby, Pieter van der Aa, and Emanuel Bowen.

The Strait of Le Maire

The title roughly translates to: “Map of Magellanica and Tierra del Fuego with the celebrated Strait of Le Maire newly detected and accurately described.” The Strait of Le Maire are so celebrated because it provided a new route to the Pacific that avoided the treacherous Straits of Magellan and proved that Tierra del Fuego was an island, not part of a massive southern continent. Staten Landt, however, between which Le Maire and his fellow mariner, Schouten, passed, is left open to the east, suggesting a larger landmass in that direction.

Jacob Le Maire and Willem Schouten, sponsored by independent Dutch merchants, circumnavigated via the new-found strait from 1615 to 1617. The importance of their find lay in the fact that Spain preferred to operate a closed sea policy in the Pacific; they claimed that their ships were the only vessels allowed to ply Pacific waters. Other nations did not agree with this policy, but the difficulty and distance in passing via the Straits of Magellan prevented many from attempting to enter the Pacific.

Additionally, the Straits were claimed as proprietary territory of the Dutch East India Company (VOC), which gave them a veritable monopoly over the passage and prevented non-company ships from passing through, even though the waters were seldom if ever patrolled. The new strait provided a legal avenue for ships of all nations to enter the Pacific, a situation feared by the Spanish whose ports on the western side of South America, already proven vulnerable to sacking by the likes of Francis Drake, were again at risk. Even though Blaeu was the official hydrographer of the VOC, he too was caught up in the excitement about the new passage, as shown by his use of celebrated in the title of this map.

Blaeu’s map also records another expedition that surveilled Tierra del Fuego, particularly in its inclusion of the Entrance of San Sebastian. The Nodal expedition was a reconnaissance mission sponsored by King Philip III of Spain in 1619. The purpose was to confirm the recent discoveries of Le Maire and Schouten of a passage from the Atlantic to the Pacific to the south of Tierra del Fuego.

The expedition was led by the brothers Bartolome and Gonzalo Garcia de Nodal, who were accompanied by cosmographer Diego Ramirez de Arrellano, who served as the chief navigator. The expedition departed from Lisbon on September 27, 1618 and by January 22, 1619 the two ships entered the strait discovered by Schouten and Le Maire between Tierra del Fuego and Staten Island. The expedition named the Strait "San Vicente," but Blaeu preferred the Dutch toponym. The pair reconnoitered the region to the south of Tierra del Fuego including the Drake Passage, before returning to Spain on July 7, 1619.

This map was based on the latest expeditions and had a large impact on representations of Cape Horn for over a century after it was made. It is a nice example of this highly desirable map and would be a central part of any collection of Patagonia, South America, or exploration.