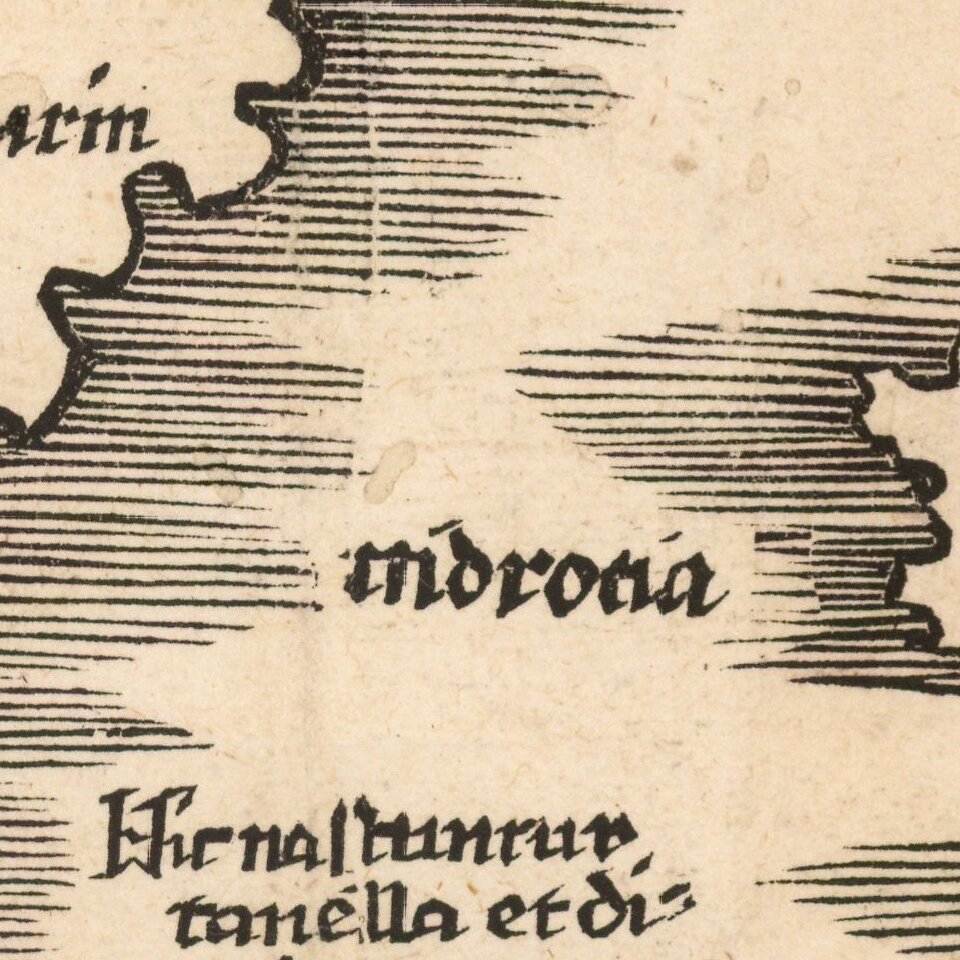 The Earliest Modern Map of India and Southeast Asia

Waldseemuller's modern map covers most of Southern Asia and is centered on the Indian Ocean, extending from Arabia and the Horn of Africa to the Malay Peninsula and northward toward China. The map is based largely upon the Cantino world map of 1502 and the Ruysch world map of 1507.

As noted by Greg McIntosh,

the depictions of the Old World, especially the seas, peninsulas, and placenames of the littoral of the Indian Ocean, Red Sea, Persian Gulf, Arabian Sea, and Bay of Bengal . . . are derived, not from multiple introductions of Portuguese cartography into Italian cartography, but by the introduction of that Old World image in a single event, that is, the arrival of the Cantino planisphere in Genoa in November 1502 and its subsequent dissemination through traditional manuscript copying processes, particularly via the highly influential copy made by Nicolay de Caverio. . . . Regarding the transmission of placenames from the Cantino planisphere (1502) to the Caverio planisphere (c. 1503-04), and from the Caverio to Martin Waldseemüller, and from the Waldseemüller maps (1507-1516) to those of Schöner, Fries, Honter, and others (1515-1546), not only can we track, via placenames, inscriptions, and iconography, the maps-as-texts over a period of time, and not only can we see in each map the outcome or end result of a particular instance of the copying of large portions of manuscript text (placenames), but we can also watch some of the copying process by each individual mapmaker as it unfolds.

The map is considered by some (see Suarez, Early Mapping of Southeast Asia) to be the first modern map of Asia. Cartographically, the map draws heavily from the Portuguese discoveries first documented on Cantino's map. The Waldseemüller map follows the Cantino delineation with an arrow-shaped Indian subcontinent and a Malay peninsula, which is greatly exaggerated and extends too far south. Burden catalogs the map as follows:

THE FIRST MODERN MAP DEVOTED TO ASIA. . . .Printed by Joannes Schott it is famous for including twenty modern or non-Ptolemaic maps. This map of Asia is one of the highlights of the work.

The cartography can be seen to derive from the portolan world map by Nicolo Caveri (Canerio) of Genoa dated c.1505 and surviving today in the Bibliotheque Nationale, Paris. . . . This it is believed was made in Portugal, based on the fact that much of the nomenclature is Portuguese, that many Italian cartographers were working there at the time and the fact that its cartography is closely derived from the earliest confidently dated portolan to depict America; the Alberto Cantino of 1502. We know quite confidently of the origin of the Cantino ... 'The return of two of Gaspar's vessels to Lisbon in the autumn of 1502 was witnessed by Alberto Cantino, an Italian diplomat in the employ of the Duke of Ferrara. At the latter's request, he had an unknown cartographer clandestinely make a beautiful world map . . . . Preserved today in the Biblioteca Estense, Modena, Italy ... Cantino personally carried it to Genoa in November 1502, where it was entrusted to be sent on to the Duke. It remained in the house of Este, in Ferrara, until 1592 when the entire library was transferred to Modena after Pope Clement VIII stripped Cesare d'Este of his duchy.' This fascinating product of espionage has just as interesting a story to tell about its rediscovery. 'At some point it was used to cover a screen. Unfortunately to achieve this a strip was removed from the top. This appears to have contained some kind of title, as the remains of some of the descender characters can still be seen. The map was stolen from the palace during a populist outbreak in 1859. A few years later Signor Boni, the librarian of the Biblioteca Estense, happened to pass a pork butcher's shop in the Via Farini where it was still being used as a screen. He bought it, removed it from the screen, and presented it to the Este Library' . .

It is the Caveri map which Waldseemuller is believed to have seen and worked from. This is particularly seen by the fact that it extends further eastwards than the Cantino. Dominating the continent is 'India Intra Gangem' or India within the Ganges. The map displays a portion of the Arabian peninsula in the west including the entire Persian Gulf. The region represented by modern day Iran is named Carmania, an ancient Greek term for a province of the Achaemenid Empire. The prominent Indus River separates it from the recognizable Indian peninsula. Both the Maldives and Sri Lanka can be readily identified offshore. There has been considerable debate on the use of the term Taprobana and its use for Ceylon (Sri Lanka) and or Sumatra which we won't go into here. One of the major representations here is of an open Indian Ocean against the belief of Ptolemy who believed it to be closed. The Portuguese at this time had reached India and were setting their sights on apparently ever greater riches further east. In 1511 they captured Malacca clearly identified on the map near the tip of the peninsula. Suarez describes this portion of the map identifying 'Maitbane' as Martaban, a port at the mouth of the Salween River in Burma. 'Nagaragoy' is Lugor or Nakhon si Thammarat in southern Thailand. Caveri described the region here as bearing 'rubies and other stones of great value'. He states that the peninsula 'is in fact a first attempt to map 'true' Malaya and Indochina, and was probably extrapolated in large part from Arabic textual sources. Some of the nomenclature on the map agrees with Islamic navigational texts'. He goes on to cite the example of 'Timonia' (Pulau Tioman) off the south eastern shore which was not known to the Portuguese at the time but was a regular port of call for Arab and Malay traders since at least c.850.

At the tip of the peninsula is found 'Bargimgapara' or Singapore. Suarez describes the words corruption as coming from 'bahr Singarpura', 'bahr' being the Arab word for land. The earliest known Portuguese reference to Singapore is in a letter to Albuquerque in 1513. It is here as has been demonstrated that Portuguese awareness stops and early cartographers had to rely on the even earlier writings of the likes of Marco Polo. At the north east tip of the south east Asian peninsula can be seen a further smaller one entitled 'fulicandora', this represents what we know of as Indochina.

Waldseemuller's map is the first to depict Sinus Magnus as the South China Sea. The small peninsula of 'Fulicandora', located directly above Sinus Magnus, represents the first earliest appearance of Indochina on a printed map.

Sri Lanka and the Indian subcontinent are relatively correct in their sizes. This map is among the earliest documents recording the Portuguese explorations into the Indian Ocean, and is of primary importance in the mapping of the India and Southeast Asia.

The first modern atlas, prepared by Martin Waldseemuller using the translation of Mathias Ringmann. This is one of the most important editions of Ptolemy, containing many new regional maps. Twenty new maps based on contemporary knowledge were included by Waldseemuller, in addition to the traditional twenty-seven Ptolemaic maps derived from the 1482 Ulm edition.

Martin Waldseemuller and his associate Mathias Ringmann, prepared this edition of Ptolemy, partly at the expense of Duke Rene of Lorraine. It was brought to completion by Jacobus Eszler and Georgius Ubelin. The atlas contains the first map in an atlas entirely devoted to America (Tabula terre nove), often called the "Admiral's map" after Columbus. The map of Lotharingia (the first map of the Duchy of Lorrain), printed in black, red and olive, is one the earliest examples of color-printing. This edition was reprinted in 1520 using the same woodcut blocks.