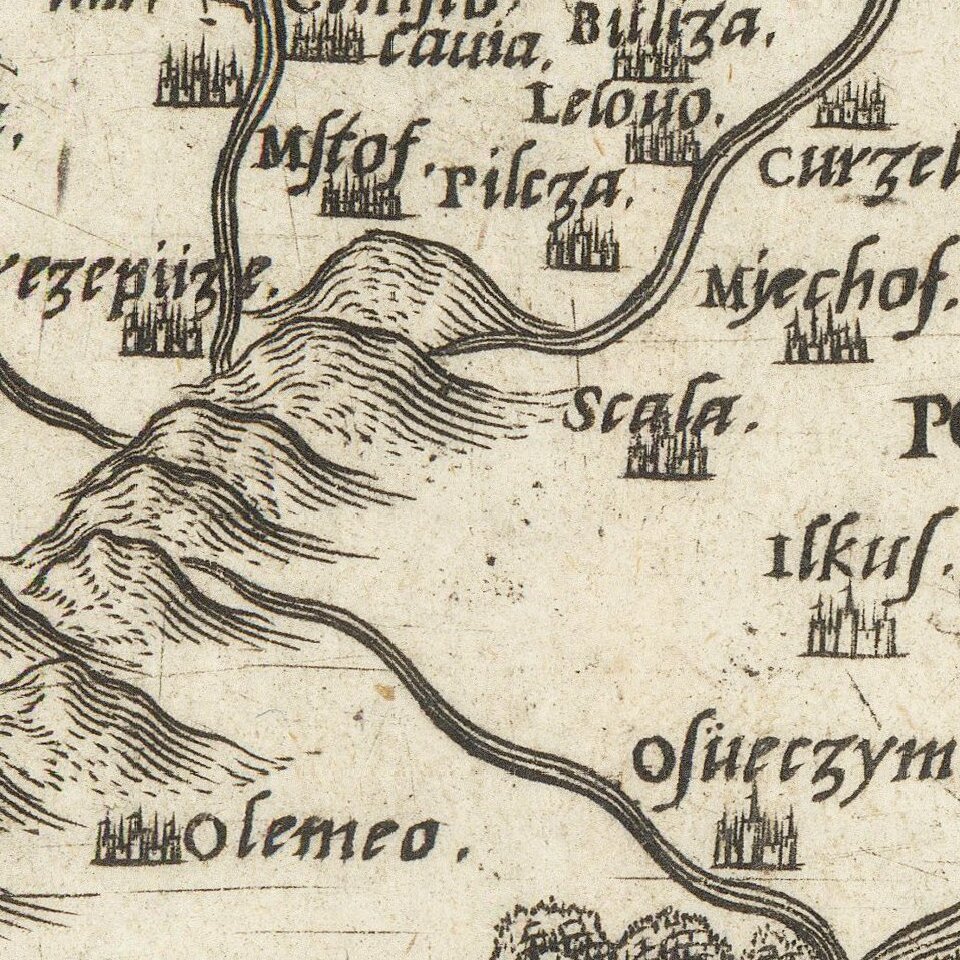 A fine example of this rare and important map of Central and Eastern Europe, published by Antonio Salamanca in Rome.

The map is derived from the iconic manuscript map of Central Europe by the German Humanist, Cardinal Nicolaus de Cusa's (circa 1450s), and more directly from Marcus Beneventano and Bernhard Wopowski. The information for Poland is drawn from Wapowski's map of 1526.

The map covers the area from just west of the Rhine River and Lake Geneva, covering most of Central and Eastern Europe including the Black Sea and Lithuania. Includes significant detail throughout, with the finely engraved features of towns, forests and mountains and the entire watersheds of the rivers Rhine, Danube and Elbe.

The image is bound on the north by the Baltic and North Seas, and to the south by the Alps and the Gulf of Venice.

Nicholas of Cusa (1401 – 1464), also referred to as Nicholas of Kues and Nicolaus Cusanus, was a German philosopher, theologian, jurist, and astronomer. One of the first German proponents of Renaissance humanism, he made spiritual and political contributions in European history. A notable example of this is his mystical or spiritual writings on "learned ignorance," as well as his participation in power struggles between Rome and the German states of the Holy Roman Empire.

As papal legate to Germany from 1446, he was appointed cardinal for his merits by Pope Nicholas V in 1448 and Prince–Bishop of Brixen two years later. In 1459 he became vicar general in the Papal States.

As noted in Volume 3, Part 2 of the History of Cartography:

Besides his ecclesiastic functions, Nicolaus Cusanus was a polymath active in a wide range of humanistic learning, from philology to astronomy and from political science to Islamic studies. The core of his main philosophical work, De docta ignorantia of 1440, is a doctrine of the coincidence of differences that join together in infinity, that is, in God. This final truth is unknowable by the human mind. Among his conclusions was, for instance, a revolutionary idea of the cosmos. Because the universe is infinite, it cannot have a center except for God; therefore, the earth cannot be the center of the universe. However, this anticipation of Copernicus’s theory was based less on astronomical observations and calculations than on metaphysical speculation. . . .

Cusanus also had a thorough knowledge of natural philosophy. In 1434, he made a skillful proposal for a reform of the Julian calendar to the Council of Basel. When he visited the imperial parliament in Nuremberg in 1444, he bought some astronomical manuscripts and three instruments, which probably originated in Prague. His library also included manuscripts of Ptolemy’s Geography and of the Itinerarium Antoninum. His own writing on the subject, the treatise De figura mundi of ca. 1463, is unfortunately lost. Another main work, the Idiota dialogs of 1450, holds an important place in the history of the methodology of physics. It describes, for instance, experiments on the measuring of fever and pulse, on specific weights, and on the determination of atmospheric humidity with a ball of wool. At the end of the dialog, Cusanus proposed to collect physical measurements systematically and in various countries. He thought they should be “joined into the One [i.e., a book], for the hidden may become clearer.

Cusanus also has an outstanding position in the history of Western cartography as the author of the first modern map of central Europe. The characteristic feature of the Cusanus-type map is the depiction of the entire area between Flanders and the mouth of the Danube and between Jutland and the river Po. This regional concept may have been influenced by the Greek geographer Strabo, who wrote that “Celtic [i.e., Gallic and Germanic] tribes would inhabit the lands north of the Danube from the Rhine to the Dniepr.” More likely, Cusanus included the Polish and Ukranian lands because he had new geographical information on those regions. Neither the original map of Cusanus nor any of his sources are known. . .

The present example would seem to be a virtually unknown state, which likely falls between State 1 and State 2. Bifolco identified the following 2 states:

Prior to the appearance of this map in 2020, we note only a single example at auction and no dealer records in the past 50 years.