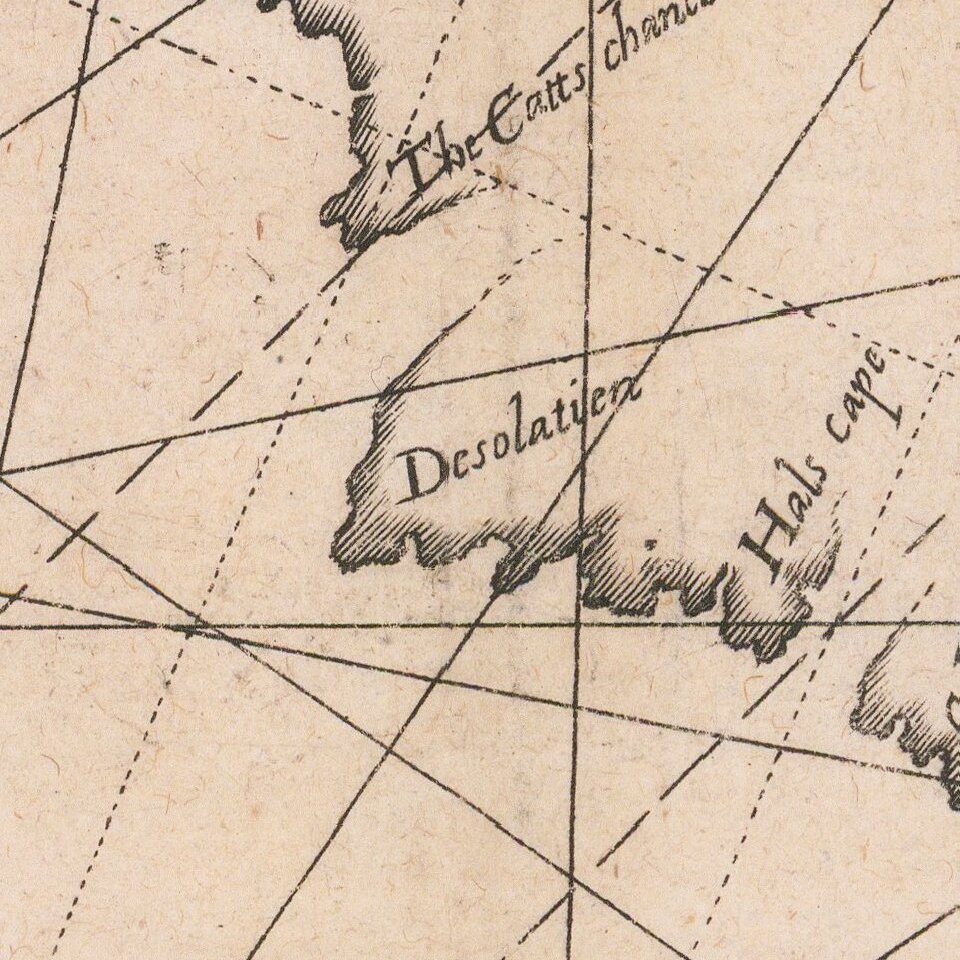 This remarkable chart illustrates the track of the fourth and final voyage of Henry Hudson in his hunt for a Northwest Passage. It was a landmark map in the exploration of the North Sea and the Arctic as the first, and for decades the only, depiction of Hudson Bay. The map was originally prepared by Hessel Gerritsz in 1612, based on a chart brought back by the surviving members of Hudson’s mutinous crew. This De Bry version was published the following year.

Oriented northward, the chart stretches from Britain (Angliae, Scotiae, Hibernica) in the southeast to Canada in the east, crossing over Iceland (Yslandt) and Greenland (Groenlandia). The Atlantic Ocean, though unlabeled, takes up much of the right half of the map. Other notable water bodies include the Davis Strait (Fretum I. Davis) and Mare Magnum, which Hudson believed was the Pacific Ocean. Today this is known as Hudson Bay.

Throughout the map, various coastlines are sketched as far as they were explored, making some highly detailed while others fade out completely. Certain landmarks are labeled, such as Hal’s cape and Whytes cape on the southern coast of Greenland. Hudson also named a number of islands along the way, including “The Iland of good fortun” and “Holde with hoope”. In the lower left-hand corner, a note indicates the bay where Hudson’s ship was frozen over the winter.

The map contains two cartouches with text discussing the journey, along with the royal crest of Charles I in the upper center. A windrose network (often known as rhumb lines) helps plot the ship’s course, and three compass roses adorn the map as central points for this grid. On each of the compass roses, a fleur-de-lis indicates north while a Christian cross points east towards Jerusalem. Three beautifully sketched ships sail the Atlantic Ocean between Ireland (Hibernica) and modern-day Newfoundland.

It is interesting to note that, in the Atlantic Ocean, there is a mid-sized island called Frisland. Though Frisland appears on many charts from the sixteenth and seventeenth centuries (and some even later), the island does not actually exist. It was invented in the 1550s by the Italian noble Nicolò Zeno, who claimed that his ancestors had discovered it in the 1380s. He also claimed they were the first Europeans to discover the New World. The compelling story was supported by Zeno’s contemporaries, and Frisland was included on maps for centuries after.

The Last Voyage of Henry Hudson

By 1610, Henry Hudson was an accomplished explorer who had made three sea voyages in Northern Europe and the New World. The English Muscovy Company employed him in 1607 and 1608 to search for a Northeast Passage, and his third voyage in 1609 for the Dutch East India Company led to him sailing up the mouth of the Hudson River. In his final voyage, Hudson focused his attentions further north in search of a passage from the Atlantic to the Pacific, in order to establish a navigable trading route to China and Southeast Asia.

Hudson set sail in the Discovery in April of 1610, crossing the Atlantic and ultimately entering what is known today as Hudson Bay. As winter descended, he elected to head south along the eastern shore of the bay in the hopes of finding a passage back to the Atlantic, rather than sail back north toward the mouth of the bay where there might be encroaching sea ice. However, there was no passage, and as the ice spread the ship was trapped.

Frozen in at the southernmost point of James Bay (a smaller bay off of Hudson Bay), the crew was forced to survive a bitter winter “subsist[ing] on moss and frogs, and the buds of spruce fir, with whatever fish and birds they could kill” (Nautical Magazine, 274). They had not brought rations to last the winter, and some fell ill and died. When the ice broke and freed the ship in June of 1611, the crew mutinied, setting Hudson, his son, and a few loyal crew members adrift. They were never heard from again.

Only eight of the mutinous crew members made it back to England in September of 1611. One of these men, Abacuck Prickett, returned with the manuscript version of this map, which made its way to Amsterdam in 1612, where Gerritsz published the map along with an account of the voyage. It was reissued the following year by De Bry in his Petit Voyages. The map was very popular both for the story behind it and its depiction of Hudson Bay, which would become a center for trade in Canada.

This chart’s beautiful detail and construction is a testament to both Gerritsz’s cartographic skill and Hudson’s passion for exploration. It would make a fine addition to a collection of early maps of Canada or of Hudson’s voyages.