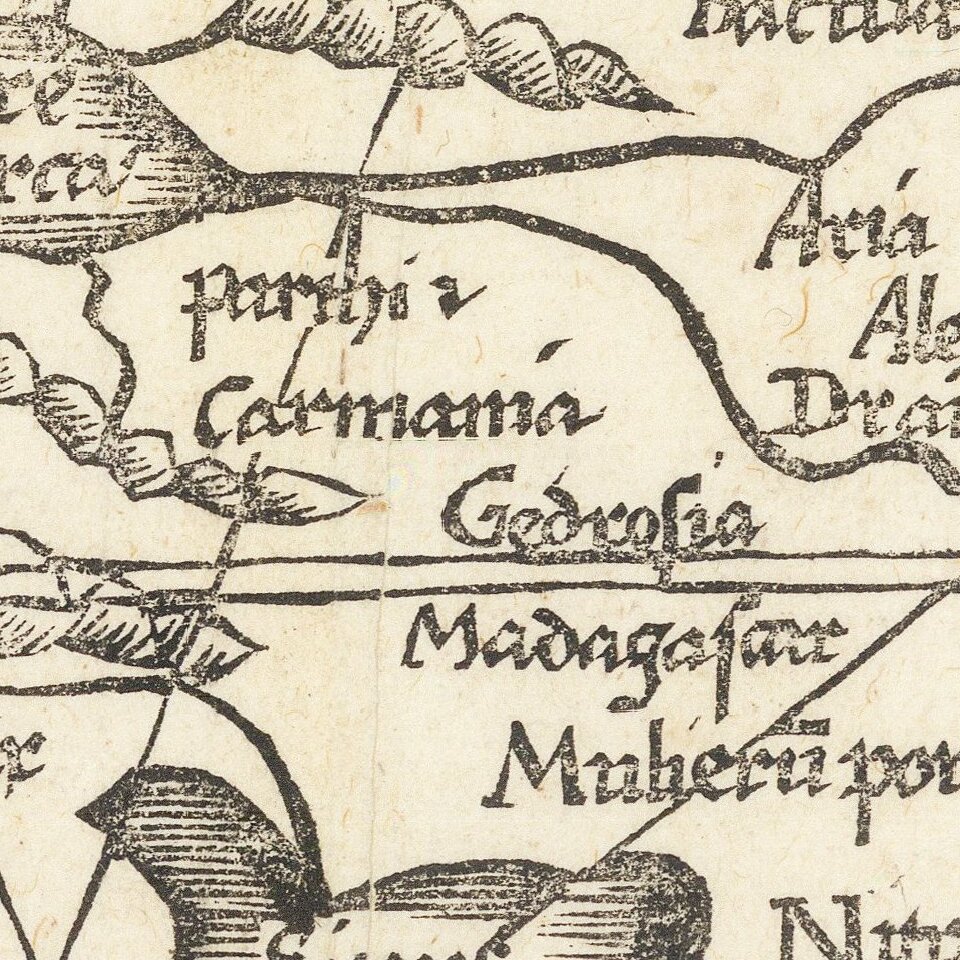 While the majority of Lorenz Fries maps were derived from Waldseemuller's 1513 edition of Ptolemy's Geographia, this map is an original work of Fries and was first included in his 1522 edition of Fries's Geographia. The map bears Fries initials, and incorporates directional lines crossing the map, and an unusual frame of banners which include the names of the winds, each looped with a coil of rope.

England and Scotland are shown as separate islands. India is shown as a double peninsula. South America is shown, although largely based upon guesswork, as Magellan did not return to Europe from his circumnavigation until September 1522, several months after this map was first published.

The inclusion of the name America derives from Lorenz Fries drawing based upon Waldseemuller's wall map of America published in 1507, for which only one example is known to survive (until the early 20th Century, there were no known surviving examples). Fries sketch of the map was utilized by Apianus for his world map of 1520.

The map is highly sought after, being the first realistically obtainable map of the world to name America (pre-dated only by the Apianus map of 1520 and Waldseemuller map of 1507) and in general a remarkable reflection of the ambiguities of the age of discovery.

Lorenz (Laurent) Fries was born in Alsace in about 1490. He studied medicine, apparently spending time at the universities of Pavia, Piacenza, Montpellier and Vienna. After completing his education, Fries worked as a physician in several places, before settling in Strassburg, in about 1519. While in Strassburg, Fries met the Strasbourg printer and publisher Johann Grüninger, an associate of the St. Die group of scholars formed by, among others, Walter Lud, Martin Ringmann and Martin Waldseemuller.

From 1520 to 1525, Fries worked with Gruninger as a cartographic editor, exploiting the corpus of material that Waldseemuller had created. Fries' first venture into mapmaking was in 1520, when he executed a reduction of Martin Waldseemuller's wall-map of the World, published in 1507. While it would appear that Fries was the editor of the map, credit is actually given in the title to Peter Apian. The map, T ipus Orbis Universalis Iuxta Ptolomei Cosmographi Traditionem Et Americ Vespucii Aliorque Lustrationes A Petro Apiano Leysnico Elucubrat. An.o Dni MDXX, was issued in Caius Julius Solinus' Enarrationes, edited by Camers, and published in Vienna in 1520.

Fries next project was a new edition of the Geographia of Claudius Ptolemy, which was published by Johann Koberger in 1522. Fries evidently edited the maps, in most cases simply producing a reduction of the equivalent map from Waldseemuller's 1513 edition of the Geographie Opus Novissima, printed by Johann Schott. Fries also prepare three new maps for the Geographie: maps of South-East Asia and the East Indies, China, and the World, but the geography of these derives from Waldseemuller's world map of 1507.

The 1522 edition of Fries work is very rare, suggesting that the work was not commercially successful. In 1525, an improved edition was issued, with a re-edit of the text by Wilibald Pirkheimer, from the notes of Johannes Regiomontanus. After Grüninger's death in 1531, the business was continued by his son Christoph, who seems to have sold the materials for the Ptolemy to two Lyon publishers, the brothers Melchior and Gaspar Trechsel, who published a joint edition in 1535, before Gaspar Trechsel published an edition in his own right in 1541.