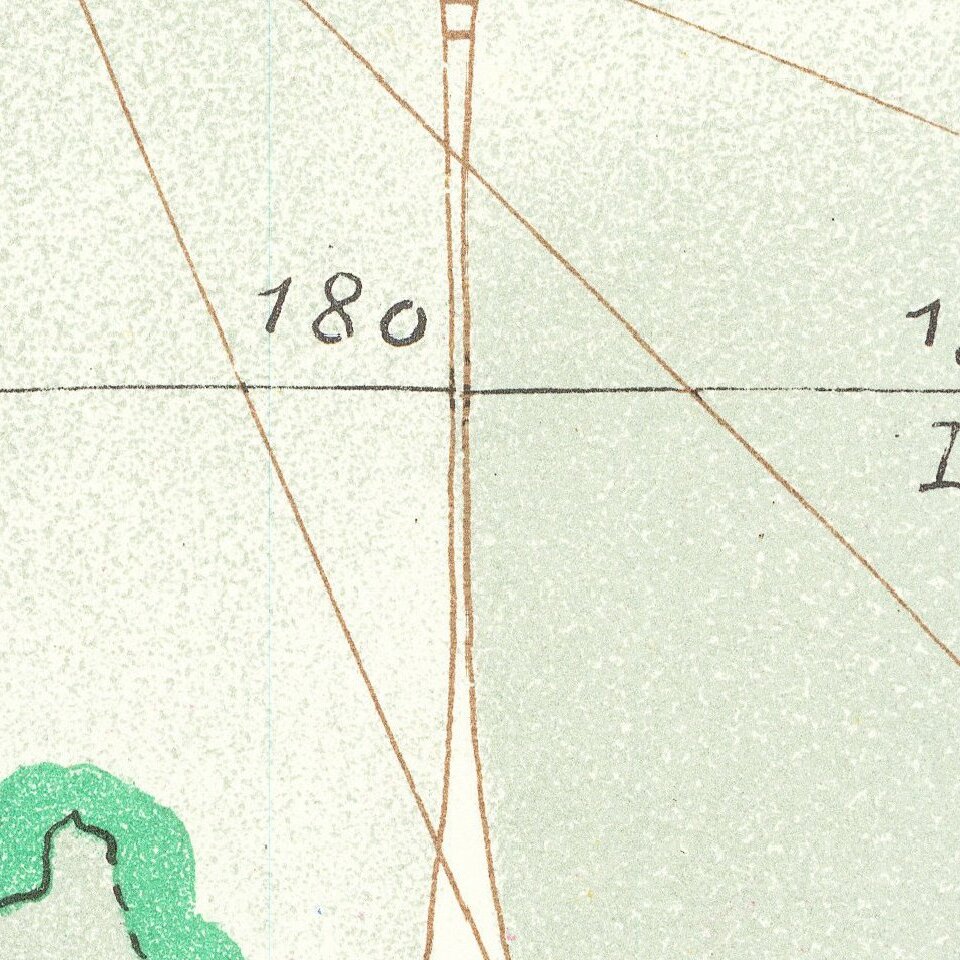 Designed by Luc-Marie Bayle and printed in a limited print run of 500, this planisphere showcases the airline's routes across the globe and features several lovely insets highlighting different forms of travel by air and by boat, along with several comical scenes of explorers and animals all over the world.

The Transport Aeriens Intercontinentaux company began as a charter airline in June 1946, in association with the Messageries Maritime Shipping Company. In 1947 TAI flew to Africa, with the main destination Madagascar.

Bayle began his military career in 1932 when he entered the École Navale. He sailed on various ships and conducted campaigns to China and Africa. After attending further marine school training in Lorient, Bayle completed two missions, one in 1948, the other in 1949, to Adélie Land on the Commandant Charcot, for which he became the on-board photographer, historian, and official painter. He commanded the French Navy in Polynesia from 1956 to 1958. In 1975 he was elected to the Académie de Marine.

In 1954, Bayle created a large model aircraft carrier on the Seine in order to demonstrate the complexity of the equipment and electronics involved. He was the director of the Musée national de la Marine, in Paris, from 1972 to 1980, and created the concept of a "port-museum", especially in Port-Louis, near Lorient. He was particularly interested in historic ships such as the Duchesse Élisabeth, a three-masted war-damaged ship which was brought back to Brest in 1946 and renamed the Duchesse Anne. After serving in the Navy the ship sank into neglect. After an initial restoration project funded by the Port-Louis museum, Bayle launched a new call for the rescue of the Duchesse Anne in February 1979, deeming her condition to be critical. It was ultimately Dunkirk that restored the ship in 1980/81, where it remains on display. Bayle founded the French maritime heritage preservation association "AMERAMI" in 1975.

Bayle drew and painted, mostly in watercolors, beginning with his first expedition to China. Other locations included in this collection are Tahiti, Moorea, Bora Bora and Mangareva, as well as the less frequented Île Saint-Paul, Macquarie Island, Kerguelen Islands, and the Balleny Islands. His works are complemented by rag sewn tapestries, posters, and advertisements. He also illustrated many books.

Bayle was appointed Peintre de la Marine in 1944. After the war ended he received an order for a tapestry for the officers of the Rue Royale. Due to his lack of funds, the Naval police provided him with a bundle of material and a team of seamstresses to perform the work. In the 1948 mission to Adélie Land, Commander Max Jacques Henri Douguet accepted Bayle on board, requiring that he learn how to use a movie camera. During the three months of travel Bayle not only learned how to film, he also composed a tapestry commemorating the arrival of Jules Dumont d'Urville to the territory in 1840. In addition to writing a diary covering the first two Adélie Land expeditions, Bayle wrote Le Voyage de la Nouvelle Incomprise recounting the same events.

From 1960 to 1972, with Hervé Baille Bayle, he created a publishing company (B & B). After designing the logo for the legendary ship Calypso, he conceived and designed the crystal sword used for Jacques Cousteau's official Académie française reception in 1989.

By 1957 the route continued beyond Saigon to Darwin, Brisbane, Noumea, and Auckland. As the airport for Tahiti began construction, T.A.I. began to fly to Bora Bora on the Society Islands in French Polynesia, in 1958. Until the Tahiti airport opened in 1960, the island was served by TAI Short Solent flying boats.

In the late 1950s the airline flew Sud-Est Armagnac, Douglas DC-4s and Douglas DC-6s having a light green livery with white cabin top and fin. They bought their first Douglas DC-8 jet airliners during 1960. The company extended its service to Jakarta in Indonesia. The livery changed to an attractive yellow, green, and black striped tail with "T.A.I." on it, and a green stripe down the fuselage. The February 1959 OAG shows eleven departures a week from Orly: seven DC-6Bs to mainland Africa, two to Tananarive, one to Auckland and one DC-7C to Djakarta.