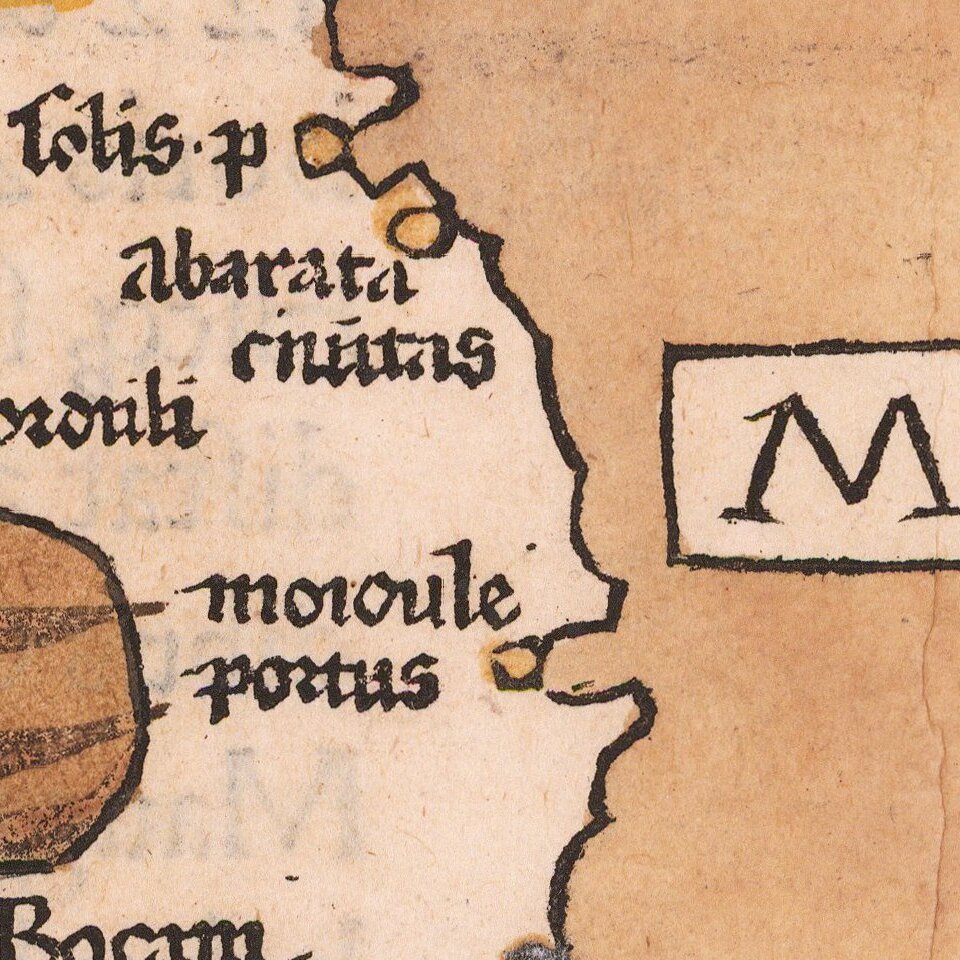 Sri Lanka, As Known To The Greeks

Fine old color example of this remarkable early map of Taprobana (Sri Lanka), from the 1486 Ulm edition of Ptolemy's Geographia.

The map is drawn from the work of Nicolas Germanicus, whose manuscript maps were created to illustrate pre-1470 editions of Ptolemy's Geographia.

The present map is from the second edition of this work, which was first published in 1482.

The earliest recorded note of Taprobana dates to before the time of Alexander the Great as inferred from Pliny. The treatise De Mundo (supposedly by Aristotle, but according to others by Chrysippus the Stoic (280 to 208 BC)) described an island the size of Great Britain. The name Taprobana seems to date to the Greek geographer Megasthenes around 290 BC. Eratosthenes (276 to 196 BC) references Taprobana in his Geographia. Ptolemy (139 AD) incorporates Taprobana in his geographical treatise, identifying it as a relatively large island south of continental Asia.

Taprobana was the home of the legendary single giant footed man-like creatures. G.U. Pope, in his book "Textbook of Indian History", claims the name to be derived from Dipu-Ravana, meaning the island of Ravana.

Historically, there was some debate over the location of Taprobana. Locations claimed included:

While Ptolemy's Taprobane has been the subject of debate, it appears to be the present day Sri Lanka on the medieval maps of Abu-Rehan (1030) and Edrisi (1154) and as described by Marco Polo (1292). The tradition of the Middle Age use of Latinized placenames and delineating places with fanciful figures contributed to absurd designs and confusion regarding the island and Sumatra. In the fifteenth century, Niccolò de' Conti mistakenly identified Taprobana with a much smaller island. Taprobana/Ceylon/Sri Lanka is marked in the 1507 Martin Waldseemuller map.

The debate regarding the proper location of Ptolemy's Taprobana continues in Sebastian Munster’s Cosmographia of 1580, which incorporates a map of Taprobana with a title in German describing it as "Sumatra, a large island", although there was nothing that was available to Munster which warranted the re-opening of the Sri Lanka/Sumatra debate and this seems to be the final milestone in Taprobana's confused history.

The 1482 Ulm edition of Ptolemy's Geographia was the first edition printed north of the Alps map and the first to appear in color which was applied by the publisher. The Ulm edition of the Geographia was one of the most important cartographic texts of the early Renaissance and the first edition of the work to be printed outside Italy. The text for this edition was a manuscript translated into Latin by Jacobus Angeli and edited by Nicolaus Germanus that had been brought to Ulm from Rome in 1468. The Ulm Ptolemy was first published in 1482 by Lienhart Holle, the same year as Berlingheri's Florence edition. Ashley Baynton Williams notes:

Working independently of Berlinghieri, but apparently using the same or similar models, Holle also added modern maps of Spain, France, Italy and Palestine, but also the first printed map of Scandinavia, composed by Cornelius Clavus, circa 1425-27. Holle's maps were printed from woodcuts, and are characterized by heavy wash coloring for the sea areas, typically a rich blue for the 1482 edition, and an ochre for the 1486 edition. These bright colors, and the greater sense of age that woodcuts convey, make this series the most visually appealing of the [Ptolemeic] maps.

Holle went bankrupt shortly after the original publication and the work was taken over by Johann Reger, who issued a second edition in 1486.