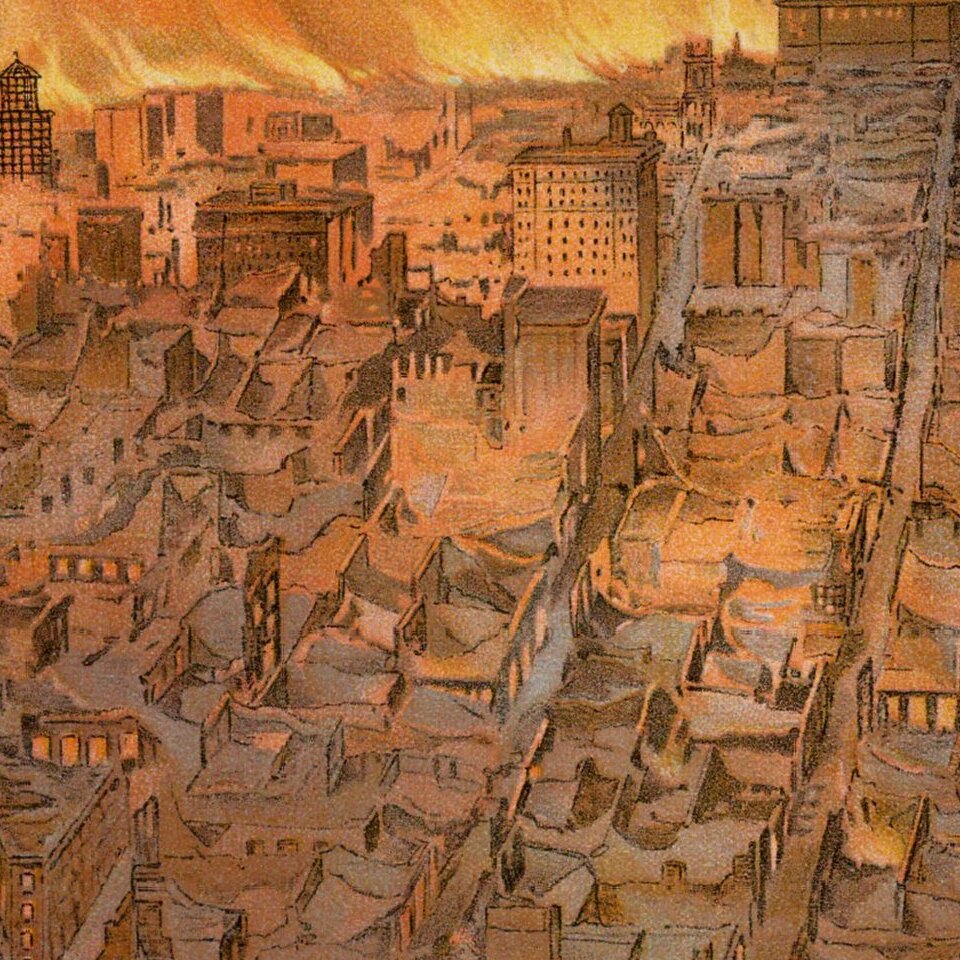 Detailed and dramatic view of San Francisco on fire after an earthquake in 1906.

On the wharf, the lithographic print shows steam ships ready to depart the docks. A crowd is gathered nearby, presumably to flee the flames. In the middle ground, individual blocks are shown, with some buildings intact, some on fire, and some reduced to ash. Dominating the view is the massive line of fire, with billowing smoke taking up two thirds of the sky.

The annotation under the cityscape reads:

The greatest conflagration in the history of the world. Over 450 square blocks were destroyed with a loss of over 500 million dollars. In the above scene the fire line is over five miles in length on the evening of the first day.

The earthquake that preceded the fire measured an estimated 7.9 on the Richter scale, with tremors lasting for a total of about 67 seconds. Deaths from the earthquake are estimated to number between 700 and 3,000. Beside the deaths, approximately 227,000 people were left homeless as a result of the earthquake, amounting to over half of the city’s population. Additionally, the severity of the tectonic shifts was such that the course of the Salinas River permanently shifted, and significant damage was done to the nearby cities of San Jose and Santa Rosa.

While the earthquake was certainly devastating, it is estimated that 90% of the damage was caused by the fire that began after the earthquake. Ruptured gas mains caused the fire, with over thirty hot spots throughout in the city. Interestingly, one of the larger fires was not actually caused by a ruptured gas main, but by a woman making breakfast for her family. This incident became known as the “Ham and Eggs Fire.”

Unfortunately, the San Francisco Fire Chief had died from injuries caused by the initial earthquake, impeding the ability of the San Francisco Fire Department to effectively respond to the numerous blazes. Making matters worse, many insurers refused to cover properties in San Francisco for earthquake damages, so some owners began to set fire to their destroyed homes in order to collect insurance payouts. This only increased the number of fires plaguing the city.

As flames began to overtake the city, the interim Fire Chief quickly called in the US Army for support. Roughly four thousand soldiers were involved in the effort to stop the fire and secure the city from chaos. Additionally, the Army impressed many civilians into service. The Army prevented mass looting and secured buildings important to the city’s governance, such as the mint, the county jail, and the post office. Additionally, the Army demolished buildings that were in the way of the fire in order to prevent the further spread of the blaze.

Planning for the reconstruction of San Francisco began even as the fire was still ravaging the city. However, one of the first roadblocks to rebuilding was that the cash reserves in the local banks were unreachable. The fire had caused the vault doors to get so hot that they could not be safely opened, delaying the ability to pay for and acquire materials and labor to begin reconstruction. However, some banks, such as the Bank of Italy’s local branch, did evacuate their cash reserves, making it possible to begin some projects.

Eventually, when the vaults of the local banks cooled down and were opened, the money was not enough to rebuild the city. It became necessary to open credit lines from banks on the East Coast. Reconstruction was then swift, with the city able to host the World’s Fair in 1915. The fair celebrated the ability of San Francisco to “rise from the ashes.” Each year, the city commemorates this event at Lotta’s Fountain, which survivors used as a meeting point during the fire.

Since the perspective that the cityscape takes is a bird’s-eye-view from above, coming in from the sea, the author, C. A. Beck, had to gather information about San Francisco to make the cityscape, including pictures taken from an airship soon after the fire.

This lithographic print made the fire, a current event of great interest, more visible to a general public eager to learn more. The image could also have been used to raise awareness of the destruction that San Francisco suffered in the wake of the earthquake and fire. 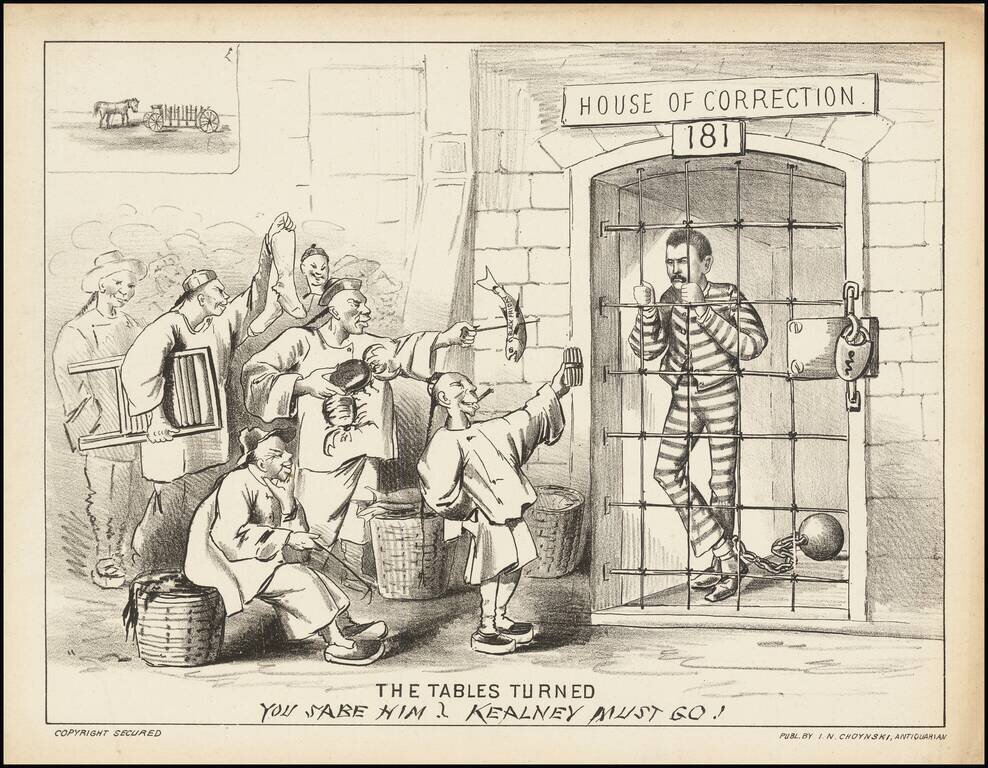 The Tables Turned / You Sabe Him? Kealney Must Go! 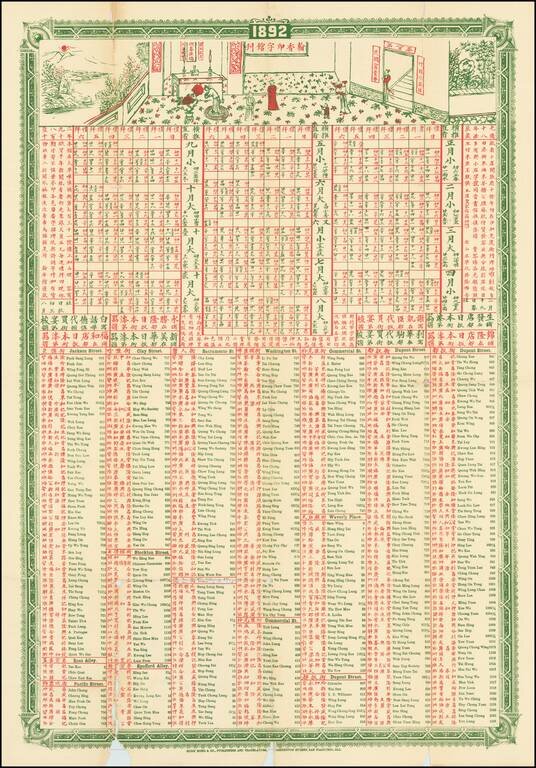 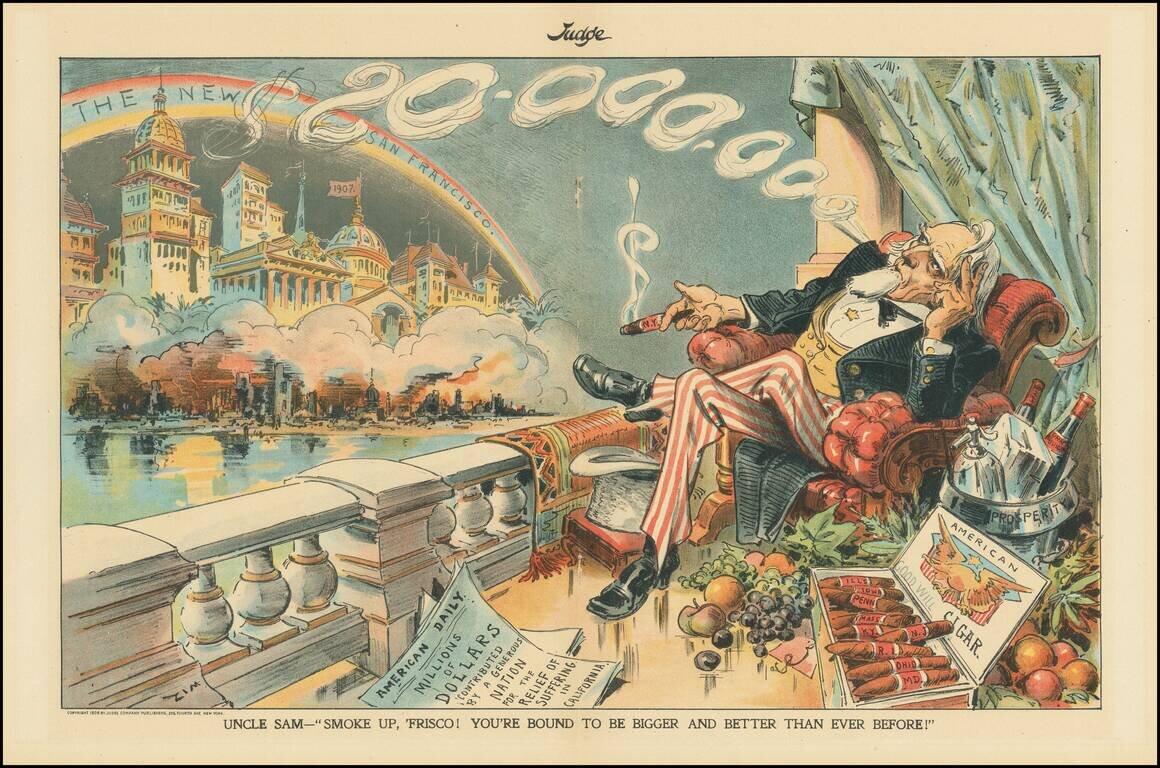 [San Francisco Fire Satirical Cartoon] Uncle Sam -- "Smoke Up Frisco! You're Bound To Be Bigger and Better Than Ever Before!"