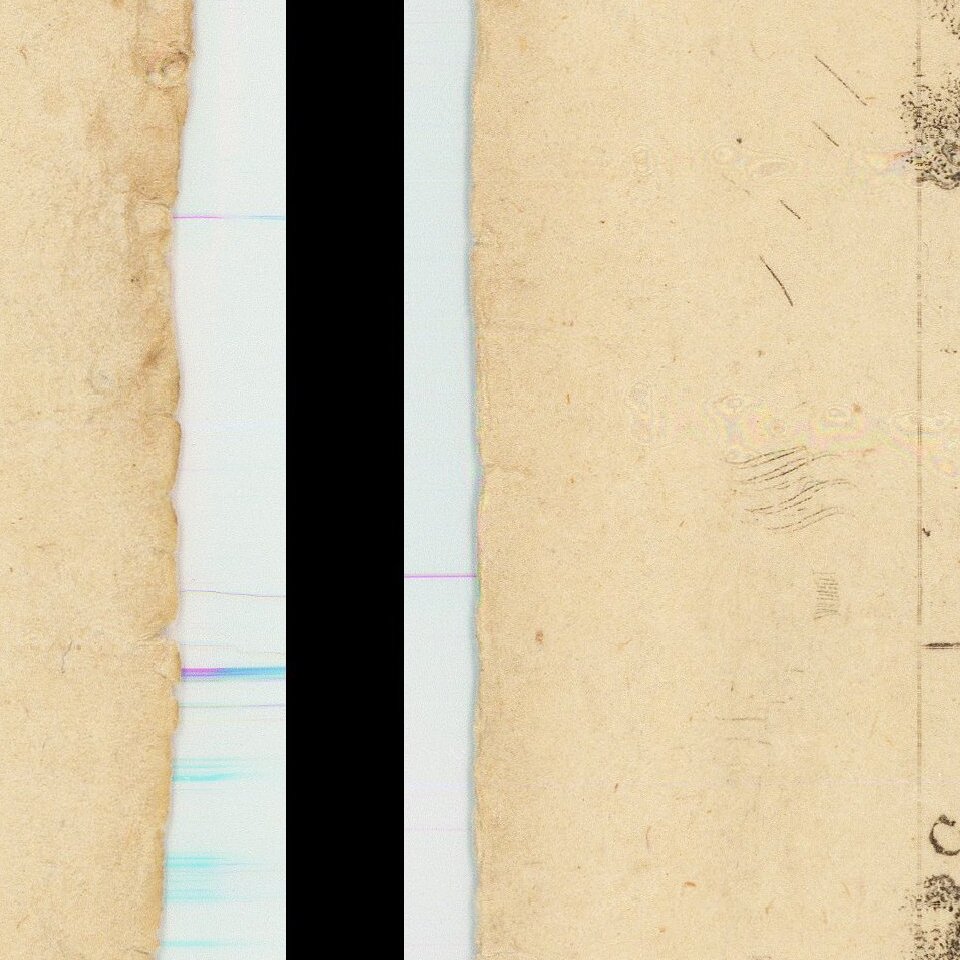 The magnificent capstone of British mapping of northeastern North America.

A rare, monumental and momentous general chart of northeastern North America, representing the capstone of British efforts to map the region after the end of the French and Indian War, and described as “by far the most accurate cartographic rendering of its subject made for many decades.” (Alex Johnson) This example separately published, probably in 1784, with provenance to James Sever, one of the U.S. Navy’s first cohort of frigate captains.

The chart depicts the complex coastline of the northeastern United States and Canadian Atlantic provinces, from Delaware Bay to Newfoundland. The chart includes a great deal of terrestrial information rarely seen on a navigation chart, including elevations indicated by shading, rivers systems, and a smattering of towns, villages and forts. Hundreds, possibly thousands, of depth soundings are given, banks and shoals are indicated by stippling, and occasional notations indicate tidal flow and compass variation. One interesting feature is the use of circled depth soundings, which “denote that the Lead did not Strike Ground at that depth of Water.”

The chart constitutes the culmination of the most exhaustive British mapping project of the colonial era. It was compiled in London by Joseph Frederick Wallet Des Barres, who integrated major surveys in the Gulf of St. Lawrence, Prince Edward Island, Cape Breton and New England by Samuel Holland, a Dutch engineer working for the Board of Trade; and surveys of Nova Scotia by Des Barres and of Newfoundland by James Cook (not that Cook) and Michael Lane, all under authority of the Admiralty. The rendering of the St. Lawrence was probably based on surveys conducted by Holland and James Cook (that Cook, the future explorer), while working under the Admiralty in preparation for the capture of Quebec in 1759. The treatment of inland New England was probably based on surveys by Holland, his fellow engineer (and rival) John Montresor, Claude Joseph Sauthier, and other provincial and military surveyors. It was his unrivaled access to these surveys that allowed Des Barres to surpass all contemporary general charts in this fantastic summation of British cartographic knowledge of its holdings in northeastern North America.

“by 1778, Des Barres managed to achieve one of the principal cumulative objectives of Whitehall’s mapping programmes—the creation of an accurate general map of all of northeastern North America, from the southern tip of New Jersey to Labrador…. It would, overall, be by far the most accurate cartographic rendering of its subject made for many decades, and it is unfortunate that it did not receive the recognition that it deserved.” (Johnson, pp. 240-241)

Beyond the chart’s cartographic significance, it is worth noting that the quality of the draftsmanship and engraving is superb yet utilitarian, entirely legible even where the information is most dense, and without superfluous detail or flourishes.

According to Sellers & Van Ee this is the twelfth and final state of a chart first issued in 1777. To this final state, Des Barres has added dashed-line borders between Nova Scotia and Quebec, and between the United States and British Canada. This international border was established by the Treaty of Paris, signed on September 3, 1783, and ratified by the United States on January 14, 1784, and Great Britain on April 9, 1784. Its depiction on this map is one of the most detailed and authoritative delineations on any map of the immediate post-Revolutionary War period.

At the headwaters of the Restigouche River, the international border splits, with one line continuing due south to the head of the St. Croix River and the other east-by-southeast to the head of Chaleur Bay. This border, along with the naming of the “Province of Nova Scotia” across all of the territory to the south, helps date the map to before August 16, 1784; for it was on that date that Nova Scotia was divided and New Brunswick was created.

One of the most important economic issues at the end of the Revolutionary War was the establishment of American and French fishing rights in Canadian waters. Before the war, cod had been the most lucrative trade good in New England, accounting for 35% of total export revenue. This was expected to continue after the War, and the Americans pushed hard for favorable treatment in the Treaty of Paris. The British acquiesced to the American demands, and likewise, their concomitant treaty with the French also focused on post-war fishing rights.

It is not surprising then that Des Barres modified the chart to reflect its utility to fishermen. In addition to the borders discussed above, to this final state he has added a legend to the text panel under the scales at top center. They read as follows:

British Dominions Where the Subjects of France are

American Where the Americans are allowed Do.

Though color has not been added to our example, these labels were clearly intended to be color-coded to delineate American and French fishing rights in the waters off Canada.

Des Barres most likely rushed this updated version to the press sometime between late 1783, after the Treaty of Paris was signed, and the founding of New Brunswick in August 1784.

Thus, along with its other excellent qualities, it should be considered one of the first maps to reflect the momentous events at the conclusion of the American Revolution.

Our chart was issued separately, but prior versions were issued from 1777 onward in The Atlantic Neptune, an atlas of North American waters used by British navigators throughout the American Revolution. In its most comprehensive form, the Neptune provided coverage from Newfoundland south and west to the Gulf of Mexico. The charts were of an extraordinarily high quality, remained the standard for decades, and were often copied and reissued by American and European engravers and publishers.

The Atlantic Neptune is most frequently associated with Des Barres, who in the 1760s and early 1770s personally oversaw the survey of Nova Scotia that composes one of its volumes. He returned to London in 1773, where for over a decade he oversaw the compilation, engraving, printing and publication of the atlas. In all, the Neptune in its most complete form came to comprise more than 250 charts, maps and recognition views, many in multiple states and editions, along with numerous letterpress sheets of sailing directions.

However the Neptune was anything but the work of one man. Its many charts, the present chart in particular, were based on several separate surveying efforts, each in itself almost incredibly ambitious and at best loosely-coordinated with the others. Together they occupied the years 1759-1775 and the energies of dozens of talented surveyors and a supporting cast of hundreds.

In all, a lovely example, with fine provenance, of a rare capstone chart from the greatest survey undertaken in 18th-century North America.

We acquired this map in October 2020 from the descendants of James Sever, Captain of the USS Congress, one of the famed first six frigates of the U.S. Navy. Captain Sever was born in 1761, attended Harvard, and upon graduation received an ensign's commission in the 7th Massachusetts Regiment (February 1, 1781) during the Revolutionary War. Sever later transferred to the 4th Massachusetts Regiment and remained in the Continental Army until June 20, 1784. Sever was from a successful Massachusetts merchant family, and that background along with his military experience was enough for him to be named the superintendent of the USS Congress during its construction in 1795. In 1798, he became one of the first six post captains of the U.S. Navy. Sever served in the first foreign action of the U.S. Navy, when the Congress was involved in privateer hunting in the Caribbean and the U.S. intervention in the Haitian War of Knives. Sever had a relatively short career in the Navy and was dismissed during Jefferson's purge of the officer corps in 1801.

Joseph Frederick Wallet Des Barres (1721-1824) was born in either Paris or Basel, Switzerland, to a Hugueont family. He studied under the great mathematician Daniel Bernoulli at the University of Basel before immigrating to Britain, where he trained at the Royal Military College, Woolwich.

Upon the outbreak of hostilities with France in 1756, he joined the British Royal American Regiment as a military engineer. He came to the attention of General James Wolfe, who was impressed with his charting ability. During this period, he also worked with the legendary future explorer, James Cook, on a monumental chart of the St. Lawrence River.

Des Barres is best known for the Atlantic Neptune, was a remarkable, multi-volume set of sea charts and coastal views prepared from recent surveys, some of which were overseen by Des Barres in Nova Scotia after the Seven Years’ War. The maps, charts, and views were prepared under the supervision of Des Barres and employed as many as twenty engravers and assistants. They were produced over the course of a decade, from 1774 to 1784, in time to be used by the Royal Navy in the American Revolution.

After the Revolution, Loyalists were resettled throughout Canada. As part of this process, a new colony was created by separating Cape Breton from Nova Scotia. Des Barres, who already owned extensive lands in the Maritimes, served as lieutenant governor of Cape Breton Island from 1784 to 1787. He later served as governor of Prince Edward Island from 1804-1812.

Des Barres lived an exceptionally long life, even by today's standards, finally dying at age 102. Des Barres' funeral was held at St. George's Round Church in 1824 and he is buried in Halifax.