1775. The Coast of West Florida and Louisiana . . . [with] The Peninsula and Gulf of Florida or Channel of Bahama with the Bahama Islands . . .

The Coast of West Florida and Louisiana . . . [with] The Peninsula and Gulf of Florida or Channel of Bahama with the Bahama Islands . . . information: 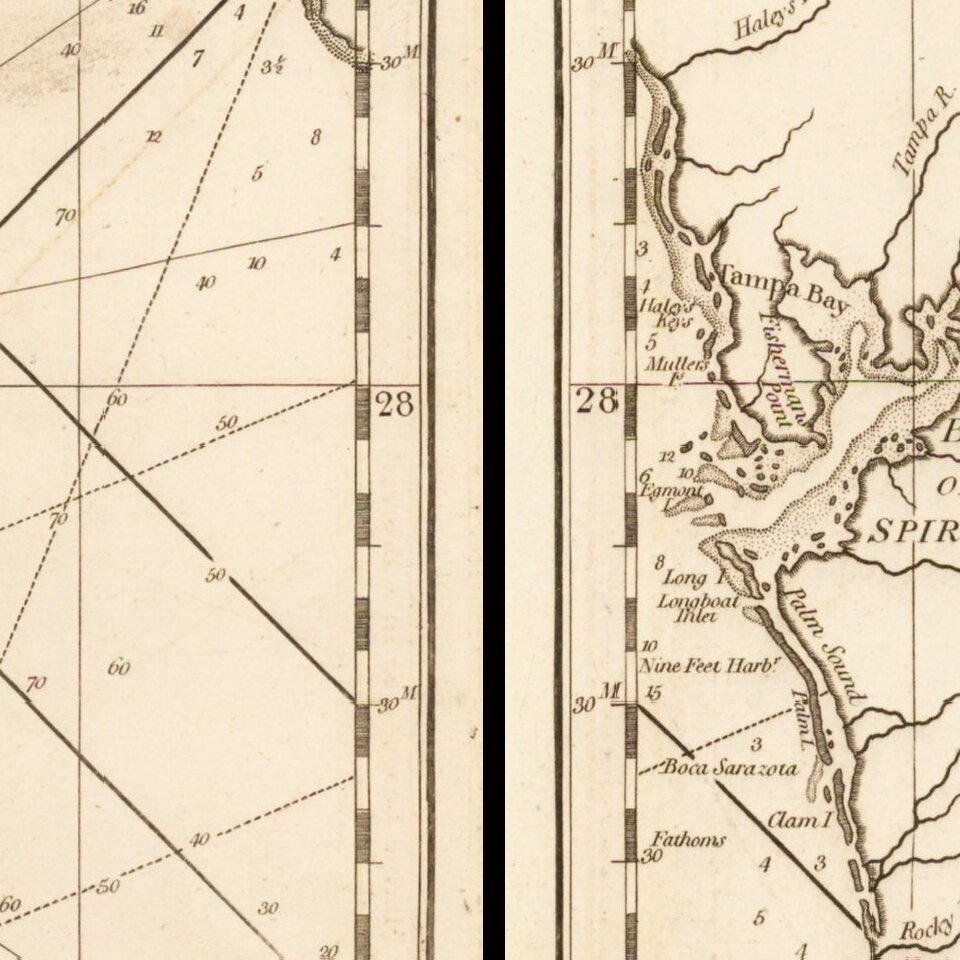 This edition of the map includes a significantly revised Florida coastline on both the east and west sides of the Florida peninsula. One obvious example in this 1794 edition is the complete reshaping of Lake Mayaco or Spiritu Sano Lagoon with the river system around it and the massive revisions to the Great Sandy Ridge and the addition of George Lake. The St. Johns' River appears for the first time on this 1794 edition.

The extent of the revisions to the chart is probably best illustrated by the significant changes to the Bemini Islands and the Berry Islands, which bear little resemblance to the treatment on the 1775 edition. Similarly Grand Bahama and Abaco Islands have been significantly revised. Jeffery's map is the earliest obtainable large format map to treat Florida and the Gulf Coast region with such remarkable detail, including soundings and rhumb lines. The map identifies the trade routes then being utilized by the English, Spanish and other maritime sea powers, along the gulf coast past the Florida Keys and through the channel separating Florida from the Bahamas. Several important anchorage points are noted with ships along the coast line. The map shows many early place names, both along the coastline and the interior.

We offer the map in the second state. The first state does not name the Bay of Spiritu Santo at the mouth of the Mississippi. A note says that the water is shallow with many islands but that little is known about the region. The detail in Florida and the Bahamas is excellent as is the elaborate compass rose and sailing ships.

Jeffreys' West India Atlas was perhaps the single most important work on the region published during the period. It quickly surpassed Mount & Page' s English Pilot, Fourth Book as the primary source of general working charts for the region, by including highly detailed maps of each of the major islands in the Pacific and highly detailed charts of the Coastlines of Florida, the Gulf, Mexico, Central America and the northern Coast of South America.