The United States of North America with the British Territories And Those of Spain, according to the Treaty of 1784 . . . 1793 [shows Franklinia!] information: 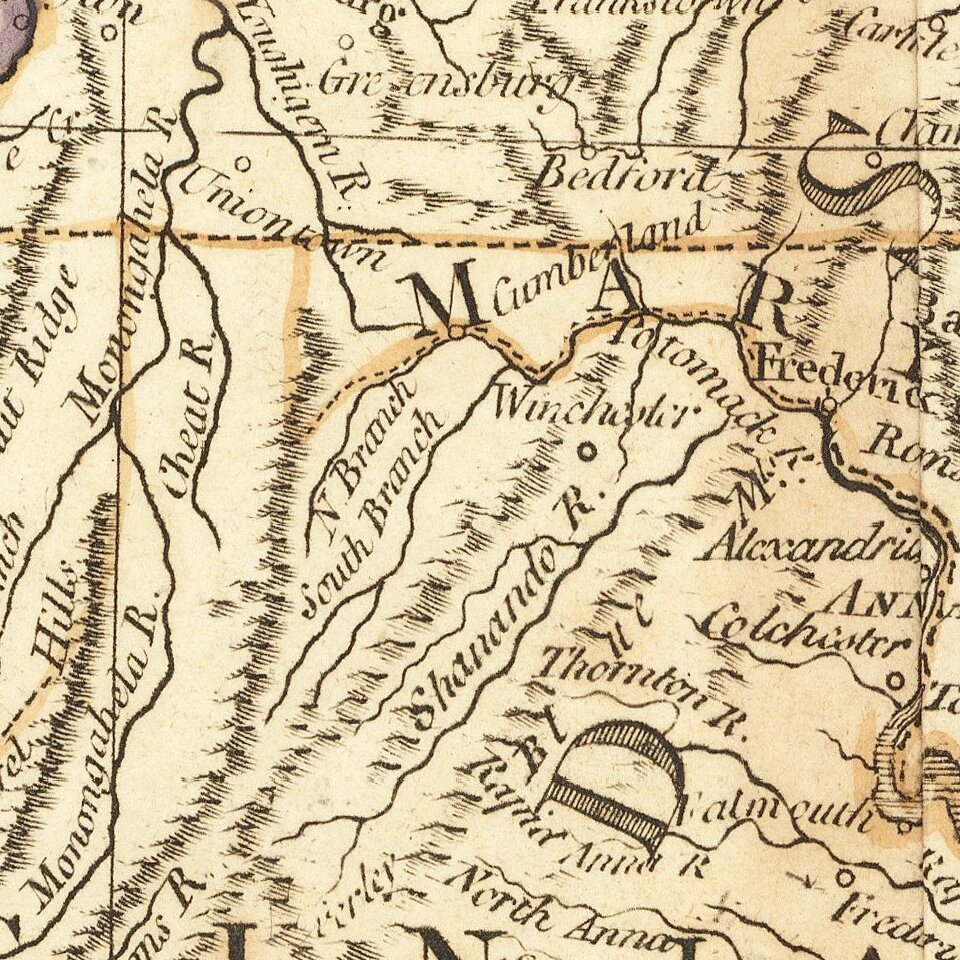 Scarce map of the United States, which includes the State of Franklinia in Western North Carolina.

One of the first and finest English maps to display the boundaries of the newly recognized United States. Faden published the map (originally titled The British Colonies in North America), in 1777, during the Revolutionary War, and regularly revised and updated it as new information became available. The map covers an area from Newfoundland and James Bay to the southern tip of Texas, here labeled "Cenis" for the Indian tribe that occupied the eastern region. The United States is rendered in solid yellow, while other political entities are indicated by colored outline. Faden distinguishes between the British territories of today's Canada and the Bahamas and the Spanish territories of Louisiana and Florida. He also notes the large "Western Territory" north of the Ohio River.

Faden's map of the US is one of the most fascinating maps of the period. While its most noteworthy feature is its references to Franklinia--New State of Franklin, it has a number of other fascinating bits of contemporary information. Beginning in Louisiana Territory, there are references to New Iberia and Arkansas or the Fair Nation. The borders of the Carolinas are shown extending beyond the Mississippi to the Pacific Coast, with a reference to the South Sea Charter. The source of the Missouri is noted as unknown. Massive Western Territory, covering Ohio, Indiana, Illinois, Michigan, Wisconsin, Iowa and part of Minnesota.

Faden also depicts the various company lands, which existed in the West, including New Jersey Company, Wabash Company, the Army Lands, the Lands reserved for the Carolina Troops, Colonel Simms, Donation Lands, Seven Ranges, Virginia Troops, etc. Georgia runs to the Mississippi, with lots of Indian Tribes and East and West Florida shown. Several early roads in Texas. The Twenty Leagues Line is interesting to note and indicates that the British denomination of East and West Florida has been retained, although perhaps not adopted by the Spanish.

Faden's sequence of maps of the United States represents one of themost important cartographic depictions of the newly independent republic. The map was issued in 14 different states, with the first five states almost never appearing on the market. The Faden sequence comprises a critical and fascinating series of historical documents regarding the political development of the United States, especially since each issue captures a distinct stage in America's process of transformative change.

The present map depicts the United States' boundaries as having been settled by the Treaty of 1784, when in actuality it is referring to the settlement agreed to at the signing of the Treaty of Paris on September 3, 1783, which ended the Revolutionary War. This treaty did not actually come into force until April, 1784. This map is in part based on John Mitchell's Map of the British and French Dominions in North America (1755) that was used by delegates during the treaty process.

This is the 5th edition of the map and one of the most sought after, being the first to add the State of Franklin, pre-dating the appearance of "Tannesse Government".

The map is one of the few maps to record the short-lived state of "Franklinia." In the latter part of the 18th century, the settlers in Western North Carolina and Eastern Tennessee decided that because of poor representation in State Government, they needed to form a state of their own. A government was formed and initial organizational meetings conducted, but the breakaway state was quickly quelled by the North Carolina authorities, although not before the State of Franklinia began appearing on a number of English maps during the period. Ben Franklin himself responded that while he was honored by the decision to name a state after him, he was not able to relocate.

This is one of the rarest maps in the Faden sequence. This is the first time we have offered the map for sale in over 25 years.

LeGear, 6010; Sellers and Van Ee, Maps and Charts of North America and the West Indies, no. 733; Henry Stevens and Roland Tree, “Comparative Cartography,” no. 80f, in Tooley, Mapping of America.