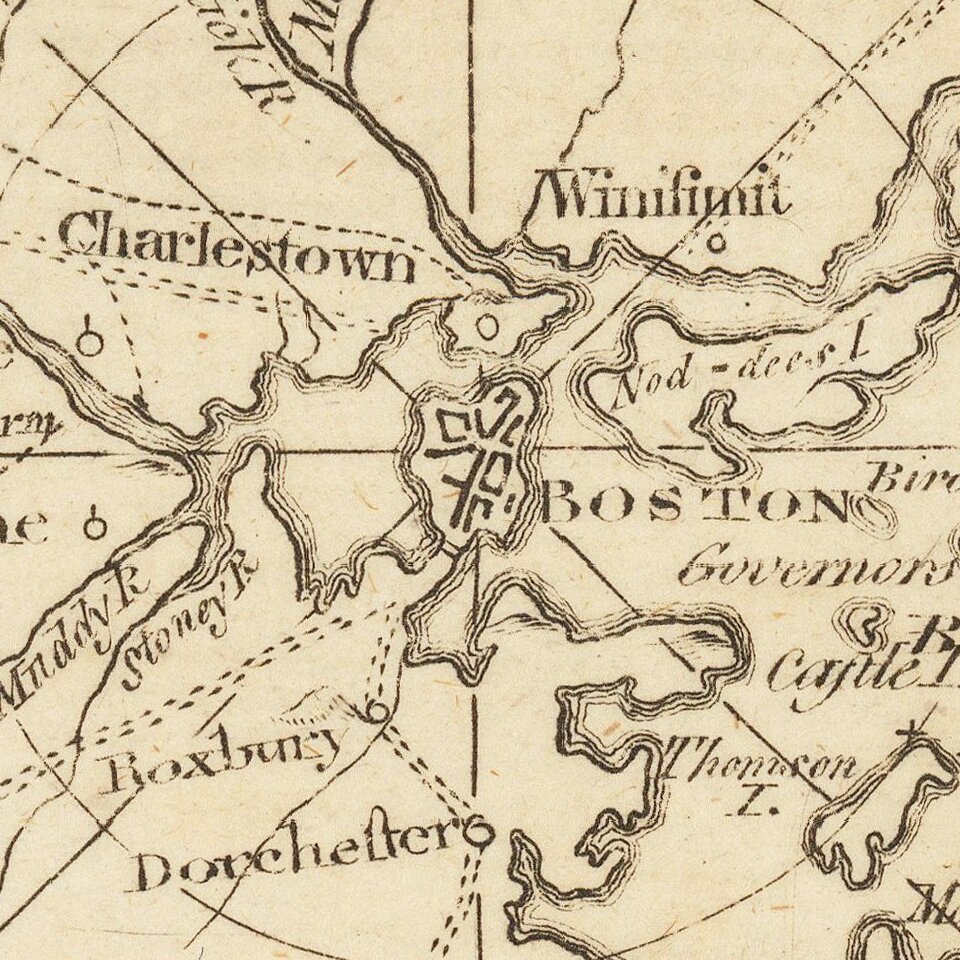 One of the Very First American Revolutionary Maps and Battle Plans. Including a Reference to the Boston Tea Party.

An unusual map of the Theater of War in Massachusetts, centered on Boston, which appeared in the Scots Magazine in 1775. The circles extend out in 5-mile intervals, with the map detailing the towns, roads, rivers and other features in the region.

At the top right corner, there is a detailed depiction of the "Action near Charleston 17 June 1775". A note shows the "Provisionals Retreating to Cambridge," as well as battery positions and the troops landing at the far side of the town. Better known as the Battle of Bunker Hill, this marked a major strategic turning point in the Revolutionary War. The British Army attack on the redoubts on Breed Hill, as portrayed on the map, lead a Pyrrhic victory, where they were able to force the "provincials" to retreat albeit with many casualties. This made the British take a more cautious approach to the war, allowing for colonists time to strengthen their numbers, tactical advantages, and politics.

Lower corners contain text listing "Memorable Occurrences " during the early period of the American Revolution. The first note at the left notes "342 Chests of Tea destroyed at Boston 16th Dec 1772. . . " The remainder of the occurrences describe events of the American Revolution, several of these occurring in Boston including the arrival of General Thomas Gage and the blockade of Boston Harbor.

The map provides a detailed picture of the surroundings of Boston at the time, even including the site of shipwrecks in and around Boston Harbor. This area was key to many of the early events of the war. Braintree, the family home of the Adams family, Lexington, the first skirmish of the war, and Concord, site of the second skirmish, are all featured.

This is one of the first maps of the American Revolutionary War, printed a mere two months after some of the battles it portrays. Printed for a general British audience, the public would have used this to better understand the geographical layout of the early stages of this insurrection. Other British maps at the time, including Lieutenant Page's A Plan of the Action at Bunkers Hill also published 1775, portray a battle more favorable to the British while these plans provide an accurate representation of troop movements. The map is quite rare on the market. We note only two appearances at auction in the past 20 years.