1779. To the American Philosophical Society this Map of the Peninsula between Delaware & Chesopeak Bays with the said Bays and Shores adjacent drawn from the most Accurate Surveys is inscribed by John Churchman

To the American Philosophical Society this Map of the Peninsula between Delaware & Chesopeak Bays with the said Bays and Shores adjacent drawn from the most Accurate Surveys is inscribed by John Churchman information: 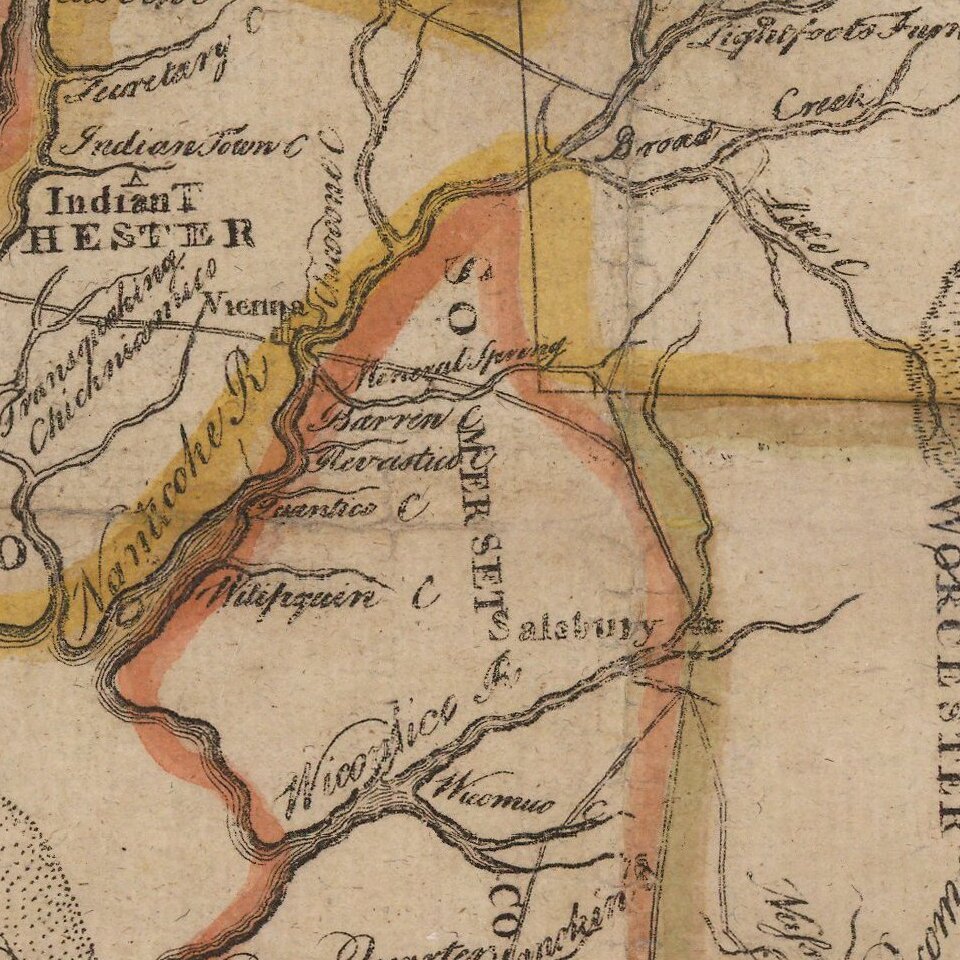 A Legendary American Rarity: The First State of the Churchman Map of the Chesapeake, One of the Only Maps Published in America During the Revolution.

The map covers anchorages and impediments to navigation, such as shoals and sandbanks. Counties are delineated and colored by hand. Towns, cities, roads, industries, rivers, swamps, ferries, and the Cape James lighthouse are also shown.

Although no place nor date of publication appears on the map, it is widely understood to have been printed in either Philadelphia or Baltimore in 1779. Churchman signed an agreement on June 30, 1779, with engraver Daniel Few or Tew, who was to prepare the copper plate for the map. Stauffer attributes the engraving of the map to Henry Dawkins. Churchman presented a manuscript of the map to the American Philosophical Society on July 23 (or 29), 1779.

On the 30th of August, a committee of the Society, consisting of David Rittenhouse, John Lukens, John Ewing, Owen Biddle, and Dr. Smith, examined the map and recommended it for publication. On August 20, they concluded that Churchman "is possessed of sufficient materials, both astronomical observations and actual surveys, to enable him to construct an accurate map, and have no doubt but that he has executed his design with exactness & care, but we can not help expressing our desires of seeing the map laid down upon a much larger scale, which would render it more serviceable for promoting the Knowledge of Geography."

Impetus for the Map

Pritchard and Taliaferro provide an excellent overview of the context in which the Churchman map was produced:

As the Middle Atlantic colonies expanded west, they continued to rely on the Chesapeake and Delaware Bays for trade. To avoid the high costs of land transportation over an inadequate road system, farmers in central Maryland and Pennsylvania shipped produce to Baltimore by way of the Susquehanna River, which empties into the Chesapeake. Thus, Baltimore had grown dramatically as a major port by the 1750s and 1760s. Philadelphia merchants believed that much of the profit made from the trade passing through Baltimore rightfully belonged to them since significant amounts of that city's commerce, primarily its trade in grain, originated in western Pennsylvania. In an effort to recoup the revenue lost to Baltimore, a group of Philadelphia merchants began to study the feasibility of constructing a canal to link the Chesapeake with Delaware Bay, thereby providing an efficient route from western Pennsylvania and Maryland to their city via the Susquehanna. John Churchman, a surveyor for Delaware, Chester, Bucks, and part of Lancaster Counties, Pennsylvania, compiled this map that illustrated several of the options studied. As Churchman noted on the map, The Proposed Canals are described by dotted Lines.

The first proposal for a canal through the northern neck of the Delmarva Peninsula came in 1764, when Thomas Gilpin, Sr. made a survey of a route from Duck Creek to the head of the Chester.

This map is one of only a handful of large America-related maps published in America during the Revolutionary War. All of these maps are now legendary Americana rarities, some of them not recorded in even a single known example. Aside from the Churchman, the other maps are the following (with their Wheat & Brun numbers):

108. John Norman. Theater of War in North America. 1777 [No known example.] 147. Bernard Romans. Northern Department. [1778] 202/3. Bernard Romans. To the Hone. Jno. Hancock Esqre, President of ye Continental Congress, This map of the Seat of Civil War in America, is Respectfully Inscribed / By HIs Most Obedient Humble Servant B: Romans. [1775] 205. A Map of Forty Miles North Thirty Miles West and Twenty Five Miles South of Boston Including an Accurate Draft of the Harbour and Town. [1776?] 261. Bernard Romans. Connecticut and Parts Adjacent. [1777] 302. John Norman. New Jersey and Pennsylvania. [1777] [No recorded example.] 303. John Norman. Seat of War in New York and Connecticut. [1777] 304. Bernard Romans. A Chorographical Map of the Country Round Philadelphia. [1778] 327. John Norman. Seat of War Around New York. [1776] 476. Joshua Fisher. To The Merchants & Insurers of the City of Philadelphia This Chart of the Delaware Bay and River, Containing a Full and Exact Description of the Shores, Creeks, Harbours, Soundings, Shoals Sands. . . [1776] 478. [Anonymous.] Delaware Bay and River. [1783] 541. Sebastian Bauman. To His Excellency Genl Washington. Commander in Chief of the Armies of the United States of America. This Plan of the Investment of York and Gloucester Had Been Surveyed and Laid Down, and is Most Humbly Dedicated by his Excellency's Obedient and Very Humble Servant, Sebastn . Bauman. Major of the New York or 2nd Regt of Artillery. 1782

We extend our thanks to Ashley Baynton-Williams for his assistance in identifying these maps.

John Churchman, Jr. (1753-1805), was a Quaker surveyor and cartographer from Nottingham, Pennsylvania. He belonged to what might be termed a family of local surveyors, with his father John Churchman, Sr.; George, John Jr.'s son; and by John, Micajah and Joseph, sons of George, all engaged in the practice.

John Jr., therefore, had access to information from his father, which aided him in his role as the surveyor for Delaware, Chester, Bucks, and part of Lancaster Counties, Pennsylvania.

John Jr., who eventually came to be known as "John the Philosopher" rose to prominence with a series of maps, charts, and atlases, the two most important of which ---- the present map, and his Magnetic atlas , or Variation Charts of the whole terraqueous Globe, London, 1794. The latter brought him notice in America and outside of it, and he became a respected authority on a variety of scientific subjects.

The Churchman family lineage can be somewhat confusing and is explained here:

2nd state: The word "humbly" added to the dedication in the lower right. The Susquehanna River watershed substantially expanded. Published circa 1786-88, per Library of Congress and Phillips Maps.