1771. To the Right Honble George Montague, Earl of Cardigan, Baron Brudenell &c. &c. This Map of the Post-Roads of Europe is Dedicated by his Lordship's Most Obedt. Humble Servt. John Rocque

To the Right Honble George Montague, Earl of Cardigan, Baron Brudenell &c. &c. This Map of the Post-Roads of Europe is Dedicated by his Lordship's Most Obedt. Humble Servt. John Rocque information: 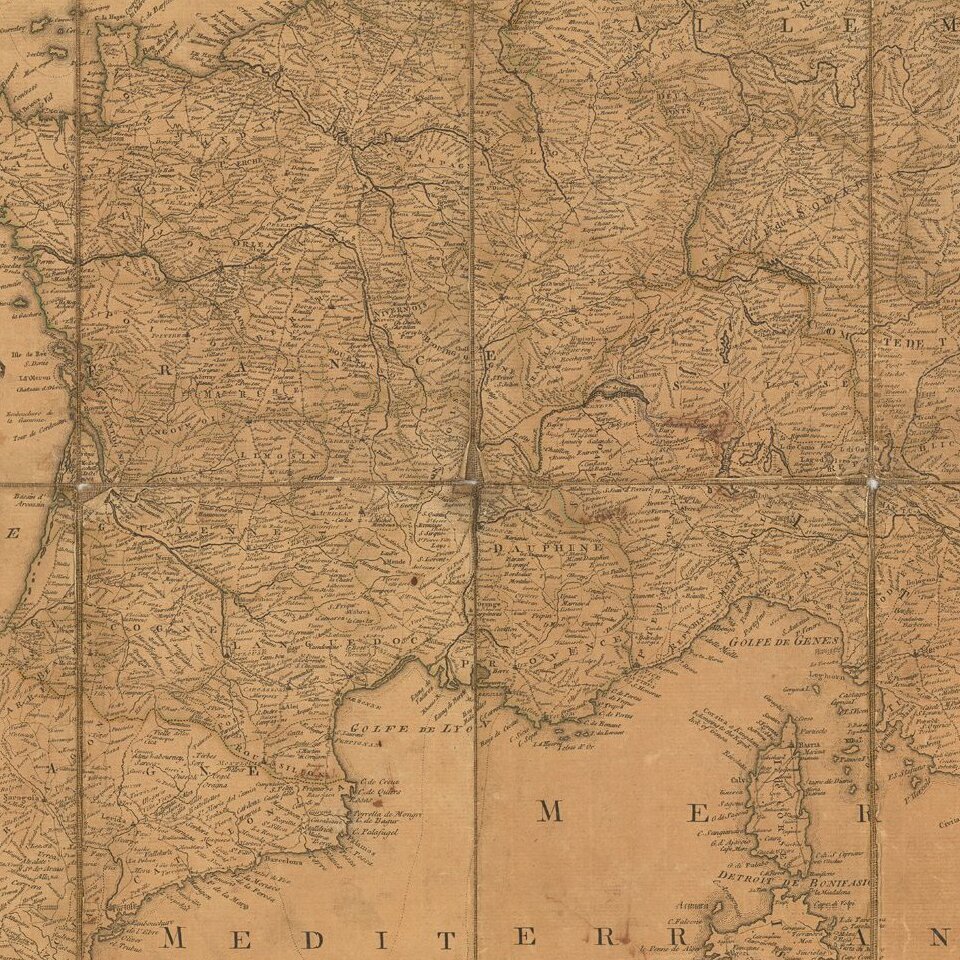 Somewhat warn example of John Rocque's map of the Post Roads of Europe, published by Robert Sayer in London, in 1773.

The first state of the map appeared in 1758. The present map is the second printing in 1771, with the Sayer imprint, replacing the prior imprint of Mary-Ann Rocque and Andrew Dury.

John or Jean Rocque was a French Huguenot whose family seems to have settled in London about 1709. In 1728, Jo Rocque worked as a surveyor, engraver, mapmaker, map-seller and publisher, in Great Windmill Street and Soho. He later moved to 'Hyde Park Road', in those days on the outskirts of London, before moving, in 1750, to larger and more central premises, first in Whitehall, and then in the Strand.

Rocque's earliest published maps were plans of gardens or estates. Subsequently, he produced fine plans of Windsor Castle, Kensington Palace, Kew Gardens, Sion House, Chiswick House, and so on, issued under his own imprint. Each is dedicated to an influential or wealthy figure, and the implication is that each figure "honoured" in this way would reward Rocque financially not only for the work itself, but also for the prestige it brought. One explanation for his approach was that map publishing in England at this period was a very problematic business. Too often, mapmakers found that the costs of original survey work could not be recouped by sales of the published piece. The Crown and aristocracy, however, were often willing to underwrite the expense of such surveys.

As his career progressed, and his connections expanded, Rocque branched out into a new field - the surveying of English towns. It was readily apparent that the individual towns of England were poorly mapped, not least London itself. Rocque commenced preparation of a series of large-scale plans of cities of England and Ireland. In 1737, Rocque embarked upon a survey of London, in conjunction with John Pine, but the survey work was not completed until 1744. In 1743, he published a four-sheet plan of Bath. In 1746, he published a 16-sheet map of the environs of London, from survey work done between 1741 and 1745.

In 1751, Rocque was appointed Chorographer to the Prince of Wales. In a letter of 1753 to his nephew, Bartholomew, who was in Mannheim, John Rocque noted that he employed ten foreigners, "as many draughtsman as engravers", in his workshop, although he bemoaned the fact that "I have been and am still unfortunate in the foreigners whom I employ". Mary Ann Rocque continue her husband's business, as well as publishing Rocque's 'Set Of Plans And Harbours ...'

It would seem that the diversity of his output, coupled with him selling up-to-date maps produced by continental and English counterparts, such as Edward Oakley, may have given him an edge over established firms of print and map-sellers, who relied heavily on re-publishing out-dated materials.

It is hard to understate Rocque's importance. Perhaps more importantly, Rocque began work at a time when English mapmaking was at a low ebb, with much of the material being published being long out of date. His work made an enormous contribution to the impetus for what has been termed the "Remapping of England".