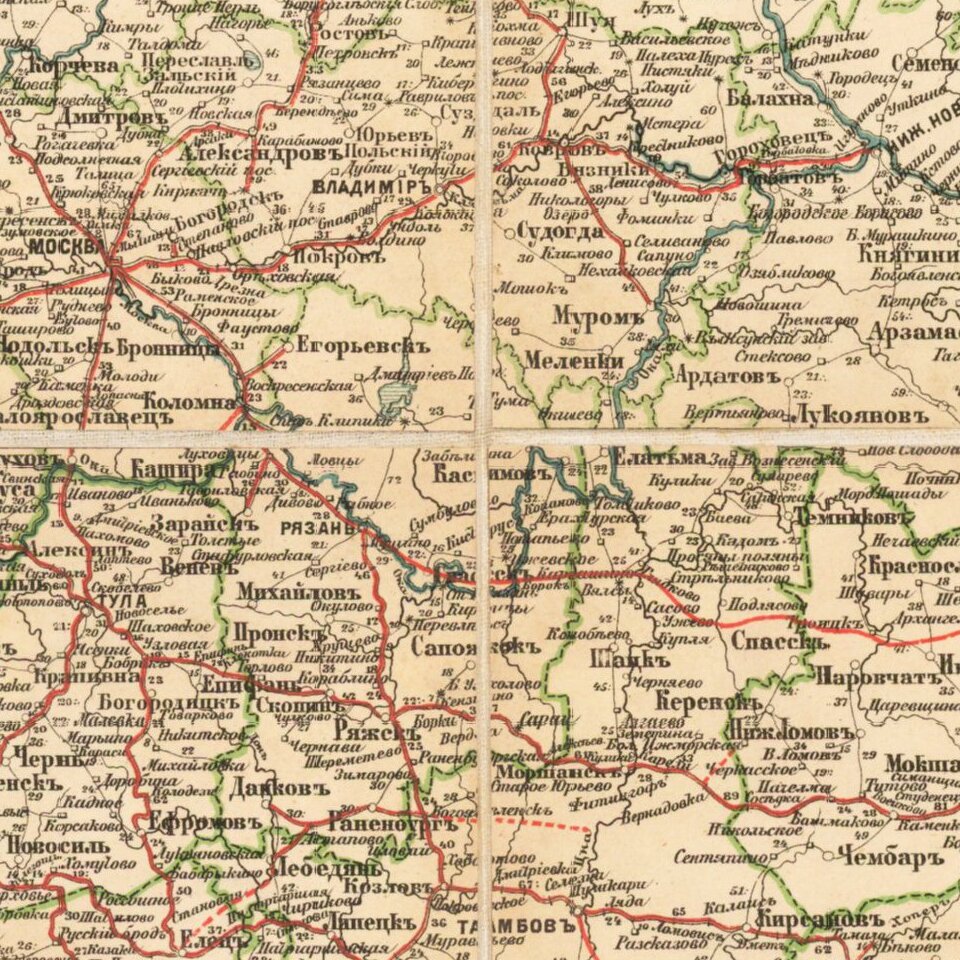 A large-format and highly detailed wall map detailing the transportation networks within Russia during the mid-1890s, the authoritative map by the firm of A. Ilyin, then Russia's foremost producer of Russian Cartography.

This rare and very interesting map is the finest and most detailed record of the state of transportation and communications in Russia during the mid-1890s, a critical time in the development of the empire. As noted in the legend in the upper left, the red lines denote railways (while dotted red lines delineate routes under construction), blue lines in the seas denote steamship routes, and black lines depict roads. Mileages are given between key points along the roads and the railways lines.

The top of the map features a large inset detailing the progress of the Trans-Siberian Railway extending from Chelyabinsk to Krasnoyarsk.

The 1890s marked a transformative period in the development and modernization of Russia. Russia was experiencing an unprecedented period of (albeit highly inequitous) economic growth, which funded grand-scale infrastructure projects (namely railways), and by this time European Russia was criss-crossed with lines. Since 1870, Moscow and St. Petersburg had been linked to the Black Sea by rail and as shown on the map, a line to Archangel, on the Arctic Ocean, was nearing completion. The period had also seen a dramatic increase in road construction, while privately run steamship lines were given concessions to run numerous routes in the Baltic, White, Black and Caspian Seas. These developments, in turn, spurned industialization and urban growth throughout the western part of the Empire.

Importantly, Russia had recently extended its presence into Central Asia, annexing large territories (including much of Turkmenistan, Kazakhstana and Uzbekistan) and gaining political control over northern Persia. In what would become known as the 'Great Game', this expansion was part of an ambitious Russian master plan to keep pushing further southwards into Asia, so challenging British control of India and the Persian Gulf. The Russian railways, shown on the map, connecting the Caspian Sea (and the great oil wells around Baku) to the Black Sea, and the lines extending east and south into Asia from the Caspian, were all key elements of the Great Game.

In the Far East, Russia was extending its control and influence from its base city, Vladivostok (founded in 1860). Russia sought to rival Japan for dominance over the northern Far East. It heavily interfered in Korean and Chinese internal affairs, and in the year that this map was printed, following the Treaty of Shimonoseki, Russia gained control of the strategic Chinese Port of Lüshun (Port Arthur), in Manchuria.

The key to Russia's Asiatic ambitions was the construction of a fixed link across Siberia - from Moscow to Vladivostok. With envisioned spur lines extending down into Central and Eastern Asia, Russia could be assured of moving troops and goods faster across Asia, than any of its rival powers. This promised to completely turn the tables on Britain and Japan.

However, the Trans-Siberian Railway would be by far the greatest infrastructure project ever attempted and would require careful planning, immense resources and herculean efforts. To instigate the project and to inspire patriotic fervor, in 1890, the Tsarevich (from 1894 Czar Nicholas II) embarked on a grand tour, sailing through the Suez Canal on an embassy to Japan, before arriving at Vladivostok. From there he began a long overland journey through Siberia back towards Moscow. Along the way, he supervised the early stages of construction of the Trans-Siberian Railway, which from 1891, was being built simultaneously at various points.

Progress was quite impressive, as by 1895 the line had been extended eastwards from Moscow as far as Krasnoyarsk, while in the Far East lines had already been laid half way up from Vladivostok to the Amur Valley. However, the project would later be slowed by Russia's defeat in the Russo-Japanese War (1904-5) and the advent of WWI, such that the main Trans-Asiatic line would not be completed until 1916. Nevertheless, once completed, the Trans-Siberian Railway extended 5,753 miles, making it by far the longest railway in the world, a distinction it still holds to this day.

While Imperial Russia's designs such as the Great Game and the domination of the Far East ultimately proved unsuccessful (completely uprooted by the tumult of World War I and the fall of the Czarist regime in 1917), the map shows that by 1895, Russia had completely transformed its place in the World from being an, albeit large, peripheral player, to becoming a great international power which would play a leading role in 20th Century geopolitics.

The publisher of the map, the Cartographic Establishment of A. Ilyin, was founded in 1859, by the General Staff officers Alexey Afinogenovich Ilyin (1832-1889) and Vladimir Poltoratsky (1830-1886). The firm was originally known as the Chromolithography of Poltoratsky, Ilyin and Co., but after Poltoratsky's departure in 1864, its name was changed to solely reflect Ilyin's stewardship. Alexey Ilyin served as cartographer for the Military Topographic Depot of the General Staff and was eventually promoted to the rank of Lieutenant-General. He thus had privileged access to government map archives, granting him a great competitive edge over his rivals. After the death of Alexey Afinogenovich, one of his sons, Alexey Alexeevich Ilyin (1857-1942), assumed control over the firm. By 1882, the enterprise reached its zenith, producing up to 6 million impressions, accounting for around 90% of all civilian cartographic products published in Russia. The company prospered until it was nationalized following the Communist Revolution of 1917.

This map is the most detailed and accurate record of the transportation system as it existed in Russia in the mid-1890s and is therefore a key primary document relating to a critical period not only in Russian history, but in the history of geopolitics throughout Eurasia. Ilyin issued the map for use by government agencies, transport contractors and large commercial concerns. Examples of the map would have been mounted to walls of their offices and exposed to heavy use, and thus such large wall maps have a low survival rate. This map is therefore quite rare, and we are aware of no other examples appearing on the market in the last 25 years and can find no institutional examples in collections outside of Russia.