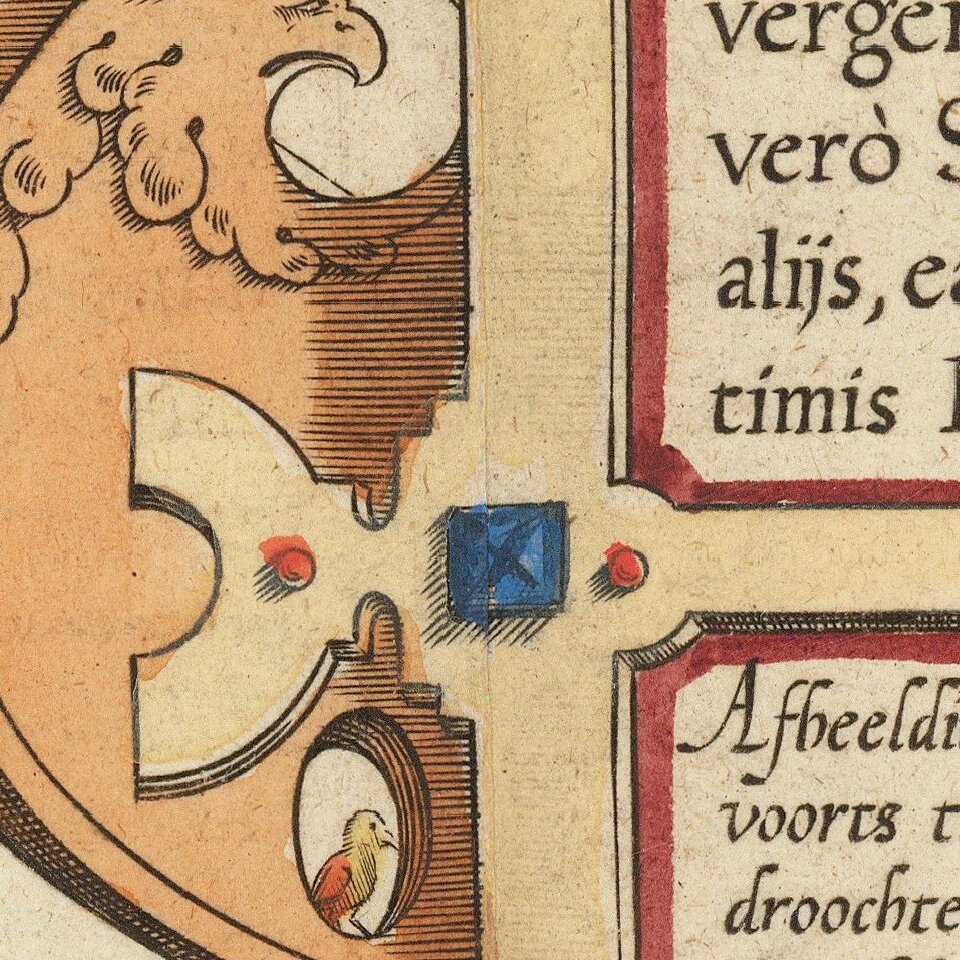 Striking map of South Africa, West Africa and contiguous parts of the Atlantic. This is one of the most richly ornamented maps of the era, superbly engraved in the Flemish style by Arnold Florent van Langren and featured in Linschoten's Itinerario.

One of the great Africa maps of the sixteenth century, the map shows the coast of Africa from Guinea to South Africa. The coast is drawn in fine detail from the Gulf of Guinea to just beyond the Cape of Good Hope.

Animals and other creatures dot the interior. A lion stares intently, watching a pair of snakes to the northwest. An elephant and a rhino face off farther south. In Lake Zaire ( Zaire lacus), two mermaids play musical instruments. At sea, two ships are in full sail, pursued by a sea monster and an even larger rival ship. These additions underline how Europeans saw Africa as a place of possible trade and exotic flora and fauna.

In an elaborate scrollwork cartouche in the Atlantic are two beautiful, large inset profile views. On the left is Ascension, with its strange peaks. A ship is already at anchor with more on the horizon. On the right is St. Helena, where a small boat filled with men approach the tree-lined landing spot. These were important refueling stations, again stressing the importance of Africa in trade routes to the East.

The balance of the sheet is filled with fabulous cartouches, the Portuguese arms, elaborate compass roses, ships, and beasts. These details make this perhaps the most spectacular map of the region published in the sixteenth century and it is in wonderful condition.

In the interior, the fictitious cities of Vigiti Magna and Monomotapa are located and most place names and geographical features have Portuguese nomenclature. Take Monomotapa as an example. In the early fifteenth century, a prince of the Kingdom of Zimbabwe established his own seat of power called the Kingdom of Mutapa to the north. The kingdom expanded quickly, fed by the region's gold reserves and trade connectivity.

The Portuguese heard of the empire, which reached its peak in 1480, when they rounded the Horn at the end of the fifteenth century and began trading along the coasts of southern Africa. The Portuguese traders transliterated the word for ruler, Mwenemutapa, to Monomotapa, which was then used to describe the region on maps.

In the 1560s, the Portuguese Crown entered into direct relations with Mutapa; in 1569, King Sebastian gave a coat arms to the Mwenemutapa, the first grant of arms to a native southern African. However, this interaction was not characteristic of Portuguese-Mutapa relations, which were often combative as the Portuguese sought to take over the local gold reserves. These gold reserves were connected in European minds to the gold mines of King Solomon, ensuring Monomotapa an enduring place in the European geographic imagination.

Langren, Linschoten, and the Itinerario

This map was engraved by Arnold Florent van Langren (1580-1644). He was a member of a prominent family of engravers. Along with his father, Jacob, and brother, Henricus, he produced globes. The Van Langren family was granted a monopoly over globe production by the States General in 1592. The brothers also engraved maps. In 1609, Arnold moved his family from Amsterdam to Antwerp, where his sons Jacob and Michael joined the business.

One of Arnold's clients was Jan Huyghen van Linschoten (1563-1611). As a young man, Linschoten traveled the world as part of the Portuguese East Indies trade. In 1583, his brother secured him a position as the Secretary to the Archbishop of Goa, a Portuguese colony. While abroad, he kept a diary, and began collecting other travelers' diaries and accounts upon his return.

His most famous work, however, is Itinerario: Voyage ofte schipvaert van Jan Huyghen van Linschoten naer Oost ofte Portugaels Indien, 1579-1592 (Travel account of the voyage of the sailor Jan Huyghen van Linschoten to the Portuguese East India). It was published in 1596 by Cornelis Claesz in Amsterdam. It was quickly translated into English (1598), German (1598), and French (1610). Latin editions appeared in Frankfurt in 1599 and Amsterdam in 1599.

Although Linschoten is known as the author of the Itinerario, he had a lot of help. Claesz convinced Linschoten to widen the project from his trip to Goa to include sailing directions and geographic descriptions. The sailing directions proved important to the founding of the East Indies Company in 1602, as they revealed information previously kept clandestine by the Portuguese. Another person who played a role in the production of the book was Bernardus Paludanus, or Berent ten Broecke, who wrote the sections on Africa and America.

Claesz was also largely responsible for the addition of the maps. The first Amsterdam edition had a world map by Petrus Plancius, first published in 1594, and five detail maps, which were made by Arnold and his brother Henricus. This is one of the detail maps and is one of the most beautiful and influential maps of the region of the sixteenth century.