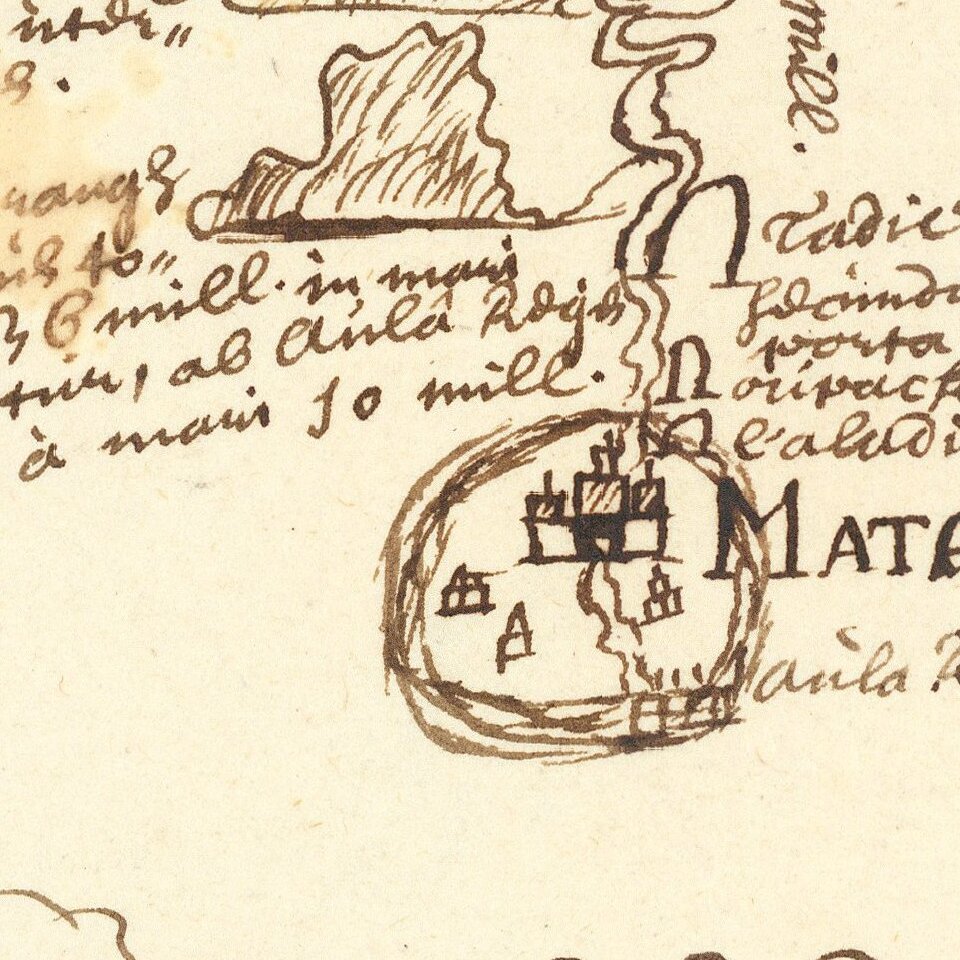 Important early VOC manuscript map of Central Java, focusing on the Kingdom of Mataram at the time of the Dutch embassy led by Captain Tack to Surakarta in 1685.

The map shows Samarang (Semarang) on the north coast of Central Java, as well as several other coastal cities. The focal point of the map is apparently an expedition to the south, with the first place warranting significant annotation being Ongaran (Ungaran), followed by Chiandi and Salatiga, about 10 German miles to the south. Further south, the two Volcanos, Genung Merbabu (north) and Letusan Merapi (south) are shown, with the final destination being Mataram (Surakarta, then the site of the King's Court).

Based upon a discussion with Peter Barber, the map was likely drawn by the hand of a native German-speaker in the later part of the 17th century, based upon the formation of certain letters and minor errors in Latin spellings, which would be indicative of the native language of the writer.

The map is on paper bearing the watermark of the City of Amsterdam (Laurentius 261), which was apparently used until about 1692.

The Sultanate of Mataram was the last major independent Javanese polity on Java, before the island was colonized by the Dutch. It was the dominant political force in the interior Central Java from the late 16th century until the beginning of the 18th century. The Sultanate significantly expanded its empire in the first half of the 17th Century. Thereafter, during the rule of King Amangkurt, in 1677, the Sultanate met with a major challenge to its control of the region, when King Amangkurt I's youngest, Pangeran Puger, formed an alliance with Panembahan Rama from Kajoran, west of Magelang. Puger and Rama agreed that Rama's son-in-law, Raden Trunajaya, would lead a rebellion against Mataram.

Trunajaya, a prince from Madura, with the help of itinerant fighters from faraway Makassar, successfully captured the Royal court at Plered in mid-1677. The King escaped to the north coast with his eldest son, the future king Amangkurat II, leaving his younger son Pangeran Puger in Mataram. Apparently more interested in profit and revenge than in running a struggling empire, the rebel Trunajaya looted the court and withdrew to his stronghold in Kediri, East Java, leaving Puger in control of a weak court. Seizing this opportunity, Puger assumed the throne in the ruins of Plered. The King escaped to the north coast with his eldest son (and future King, Amangkurat II). Most of the rebel forces withdrew after sacking the town, leaving Puger behind to take the throne. Amangkurat I died in Tegal shortly after he fled, with his son ascending (in exile) to the right to the throne of the Sultanate. In order to retake his kingdom, Amangkurat II aligned with the Dutch VOC. The VOC commenced a war to reinstate Amangkurat II to power, and thereby gain an important trading partner and concessions for the right to do business in the region. The multinational Dutch forces, consisting of light-armed troops from Makasar and Ambon, in addition to heavily-equipped European soldiers, first defeated Trunajaya in Kediri in November 1678 and Trunajaya himself was captured in 1679, near Ngantang west of Malang. In 1681, the alliance of VOC and Amangkurat II forced Puger to relinquish the throne, in favor of his elder brother Amangkurat II. Amangkurat II moved the capital to Surakarta, in the Pajang region (northern part of the stretch of land between Mount Merapi and Mount Lawu, the southern part being Mataram). By providing help in regaining his throne, the Dutch VOC believed that they had brought Amangkurat II under their control. Amangkurat II was apparently unhappy with the situation, especially the increasing Dutch control of the northern Java coast, but he was helpless in the face of a crippling financial debt and the threat of Dutch military power. The King engaged in a series of intrigues to try to weaken the Dutch position without confronting them head on. For example, he formed alliances with other kingdoms such as Cirebon and Johor, along with certain warlord like groups wanted by the Dutch for attacking colonial offices or disrupting shipping, including most notably the warlord Untung Surapati.

In 1685, the VOC leaders in Batavia sent an expedition led by Captain Tack, the officer who had earlier captured Trunajaya. François Tack (1649-1686) led the VOC delegation to King Amangkurat II at the new court in Surakarta. The purpose of the mission was to make a settlement concerning the money the King owed to the VOC and to ask for extradition of the Warlord Ungung Surapati, a former Balinese slave, who raided the countryside south of Batavia and who was then being sheltered at the court of Amangkurat II. The Dutch viewed Surapati as a murderer. The Javanese on the other hand regarded Surapati as a rebel warrior fighting VOC imperialism.

Amangkurt II received the delegation. Feigning cooperation, Amangkurat II arranged a ruse in which he pretended to help Tack in tracking Surapati. In the ensuring days, Tack was ambushed and killed while pursuing Surapati. While this was certainly a serious provocation, the VOC leadership in Batavia decided not to take further action against Amangkurat II, as the situation in Batavia itself was far from stable. Mainly due to this incident, by the end of his reign, Amangkurat II was deeply distrusted by the Dutch, but the VOC was similarly uninterested in provoking another costly war on Java.

The story of Surapati's life is told in the Javanese text Babad Kraton.. .De moord op kapitein Tack in Kartasura.

As it would be a number of decades before the Dutch returned to the area, the map is almost certainly an artifact of the Tack led VOC delegation's expedition to Surakarta.